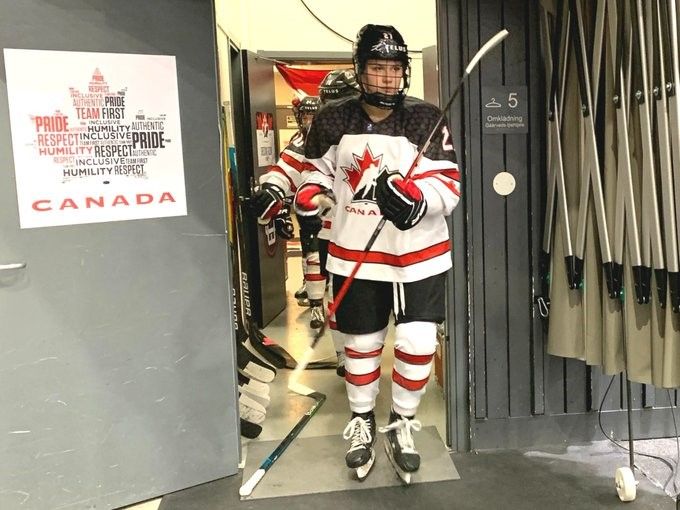 When these two teams played a few weeks ago, it was a double-digit blowout for Czechia. We know how strong the Czechs are and they once again won the group, but it wasn't an easy task. Slovakia has the ultra-talented 14-year-old Nela Lopušanová, but she's not the only good player on the roster and they seem to be elevating their game to match her. After making their first-ever quarterfinal in June, Slovakia has proved they have staying power and it wasn't just a fluke.

Adéla Šapovalivová had Czechia up in the first, but Lopušanová scored a short-handed goal to tie it up. The Czechs scored early in the second to carry a 3-1 lead into the final frame, but Slovakia didn't go down without a fight, including scoring a goal with about 90 seconds left to bring the game within 1. This is a team on the rise and they make a compelling argument for an expanded bracket.

"We managed to not get scored on on the 5-on-3, which is really good, but it was just hard to bounce back and get into the rhythm of the game. The same in the third. The second was very clean." – Slovakia D Lily Stern

"I know that all of them can be better. There is still something missing." –  Andrašovský

"I always try to keep an eye on her the whole game. I was watching her yesterday when she scored a hat trick. She's really talented. It's always tough to have these players playing against you, but you just have to keep an eye out on her. And I think except for a couple of exceptions, we managed that." – Hesová on Nela Lopusanova

After two hard-fought and close losses to the US and Canada, the Swedes got a big win over their neighbors and rivals. They played a quick game, using speed, particularly in transition, to put Finland on their heels and were able to strike before the Finns got set up on defense. Sweden showcased what their roster is capable of on open ice, with some long, crisp outlet passes. The speed of their previous games helped prepare them here and suddenly they had time and space to dish the puck and find each other on ice. The result was a beautiful game where their best players were able to show off. While Finland did their best to press and showcased some strong puck possession at times, they never came together as a unit to challenge their opponents.

"It wasn't a good game by us. It's hard to pinpoint what we need to change. I think the issue is mostly between the ears now." – Finland coach Mira Kuisma

"We had five different goal scorers and we played for a whole 60 minutes today. They showed that they can do that." – Sweden coach Andreas Karlsson

"We focus on playing with speed when we play Finland." – Karlsson

"We all like each other in the group and we want to play for each other." –  Sweden F Hilda Svensson

Switzerland took a 2-1 win thanks to goals from Alessia Baechler and Alena Rossel. The teams will meet again in a best-of-three series to decide who will be relegated from the top division.

Switzerland is set to host the 2024 Women's World Championship.

It was a rough outing for the Americans, who never looked like they were locked in and struggled with just about every aspect of the game. They mustered just 11 shots on goal despite numerous power plays. In the third, their first shot on goal was Cassie Hall's unsuccessful penalty shot.

In the waning minutes of the third, they earned a power play, called a timeout and then pulled goalie Annelies Bergman to make it a 6-on-4. They promptly lost the zone and then were called offsides upon attempting to re-enter. Less than :30 into the power play, Molly Jordan took a cross-checking penalty and the advantage was wiped out. That right there feels like a distillation of how this game went for the US. Nothing clicked and they looked overmatched. The bright side for them is that they were already assured a bye to the semifinal round and the last four gold medals in this tournament have been won by the team that lost the preliminary round matchup between the US and Canada – but it's up to them to make that possible.

Canada controlled the puck, got better as the game went on, and grew in their confidence. The Americans actually scored first, as Joy Dunne put them up 1-0 midway through the second, but Canada responded and within fewer than four minutes, had a 2-1 lead they would not relinquish. Their third goal was controversial, with a more than five minute review needed to call it a good goal, but other than padding Caitlin Kraemer's stats, that goal didn’t change the outcome of the game.

"She's a 200-foot player. She's strong, she's fast, she's physical. She's got great hands. She's got every tool in the box, for sure." – Canada coach Courtney Birchard-Kessel on Caitlin Kraemer

"Before the game, the girls came up with three objectives and they stuck to them. Each and every period they got better. I think what they learned is that if we really do play as a team and lean on each other, we're going to be successful." –  Birchard-Kessel

"The puck was in the net. In my opinion it was a full goal. The replay showed that and you've just got to really do everything to make the refs really believe that it was a goal." - Canada F Caitlin Kraemer

"[The play] was set up so I'd shoot and go to the net for a rebound. But it just went in instead. We'll take it. We were just trying to get it to the net. It was a team effort. I had the easy part." – US F Joy Dunne

"We had the zone time, but we were getting pucks deep and I thought they did a pretty good job of keeping us outside." – US coach Katie Lachapelle

"We were making too many passes and trying to make that perfect play." –  Lachapelle

"We have to figure out a way to stay even-keeled and be able to string next shift to next shift and we just couldn’t do that tonight." – Lachapelle