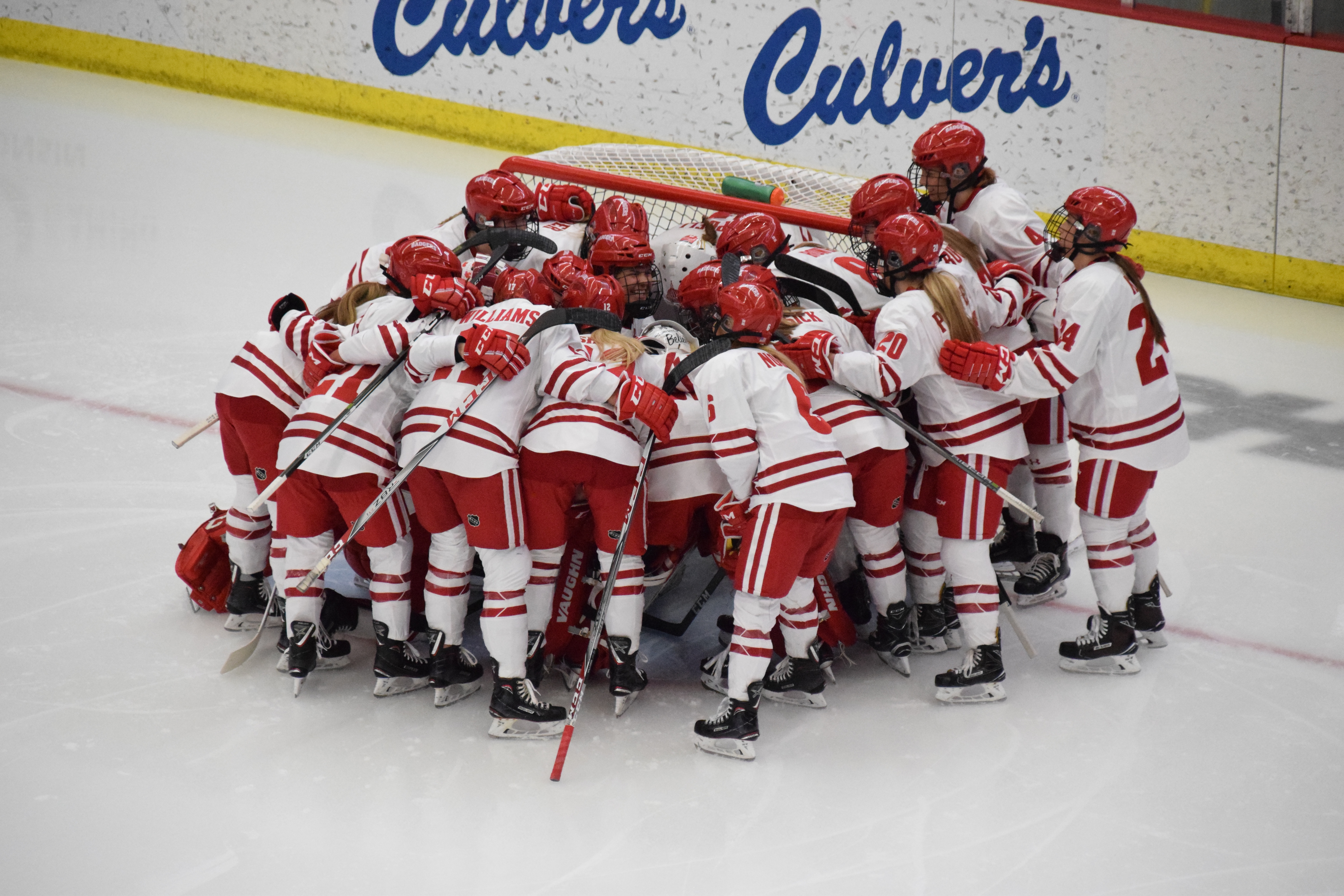 Wisconsin needs a single point in Columbus to clinch a share of the WCHA regular-season title, while two or more points would give the Badgers the title outright -- their third in a row. It would be the first time in program history that the Badgers have won three straight.

OSU was riding high on a stellar (and somewhat unexpected start) to the season when they went to Madison in October...and were crushed 7-0 and 3-1. You can bet that the Buckeyes are looking to earn some honor and pride back at home this weekend.

They also don't want to see Wisconsin win the WCHA crown on their ice, and certainly wouldn't mind giving themselves a bit of breathing room when it comes to odds for the postseason. They currently sit fifth in the RPI and pairwise, but both Cornell and Minnesota are just barely behind them. Since they're counting on an at-large bid, they don't want to take any chances with upsets in other conference tournaments, or even their own. If the Gophers make a run for the WCHA auto-bid, for example, it would likely put OSU in a much more precarious situation.

The Badgers have looked a bit more vulnerable the past few weekends. They earned a sweep of St. Cloud State last weekend, but it was by no means assured, and they tied with Bemidji the weekend before. I don't expect the Badgers to sweep this weekend -- it's likely that we'll see at least a tie or a Buckeye win.

Vermont has essentially laid waste to a bunch of top-ranked teams since the winter break, and Boston University is only four points ahead of them in the Hockey East standings. The Catamounts are also only two points ahead of Connecticut. They definitely don't want to let those Huskies catch them, as they'd end up in eighth place and draw Boston College in the first round of the Hockey East tournament.

Meanwhile, BU could gain serious ground and some momentum heading into the Beanpot, a tournament they've won just one time (in 1981). The Terriers are only three points back of New Hampshire and Northeastern, and moving up that much would mean getting to host a first-round series and a much easier opponent.

The Terriers took both of their early season meetings, but Vermont upset a ranked BU team early last season and earned a tie. Plus, they're infinitely better now then they were before the holidays.

These could be trap games for both of Yale's ranked opponents. Yale sits sixth in the ECAC, and is just two points back of fifth-place Quinnipiac and five points back of Cornell and St. Lawrence. They're also only a single point clear of both Harvard and Princeton.

The top four teams in the ECAC are battling it out for position and national rankings and could fall prey to a team like Yale. With both games streaming for free, this could be a worthwhile weekend of hockey to watch.

↓Maine -- The Black Bears made program history by entering the polls three weeks ago, but fell out this week after losses to Merrimack and Connecticut.

↑Boston University senior Victoria Bach -- Bach became the program’s all-time scoring leader with two goals and an assist in a 6-1 win over Merrimack to reach 185 career points. Bach sits at 97 goals with 88 assists in her career and will look to top the century goals milestone this weekend. The previous record-holder was Sarah Lefort, who had 183 points on 92 goals and 91 assists from 2012-2016.

↓St. Lawrence -- At the moment, it looks like the Saints will be the first team out in the NCAAs. They sit eighth in the RPI and the CHA auto-bid winner would push them out.

↑Olympics -- The puck drops in Pyeongchang next Saturday. The first game is Sweden vs. Japan at 2:40 AM Eastern Time, and then it's Switzerland vs South Korea at 7:10 AM Eastern Time.

↓Exciting hockey -- On paper, this weekend doesn't look particularly exciting. There aren't a lot of ranked teams playing each other and some of the top squads are facing the bottom of their respective conferences. After the great hockey last weekend, it feels like a bit of a letdown. Here's hoping for some upsets to liven up the weekend a bit.