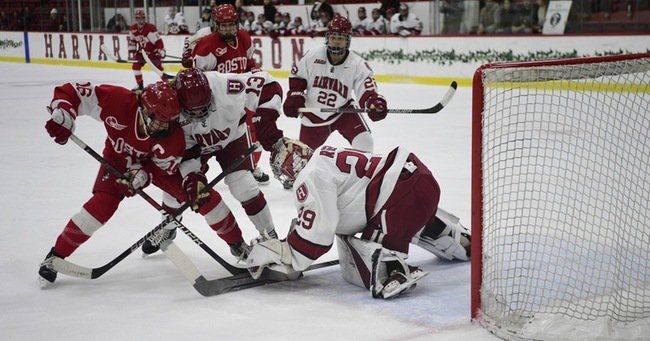 When Lindsay Reed made 103 saves in the two games of the Beanpot, she showed the world why she's been one of the best goalies in the country this year. The Crimson aren't having the season they'd hoped for, but Reed is the reason any team playing Harvard should be scared. Despite Tuesday's overtime loss to BU, the Crimson have to have nothing but confidence in what they are capable of.

When your season isn't likely to amount to a lot, the next best thing is to play spoiler and start building the profile you hope to hit the ice with next season. Getting a marquee win over Clarkson would be a big boost for Harvard. The Golden Knights get a huge portion of their scoring from their top line. If Reed can stymie them at all, the Crimson have a great shot at getting the upset.

Clarkson is still within striking distance of the ECAC regular season title, three points back of Princeton heading into this weekend. They don't want to take any chances, so winning out is the best case scenario for them and gives them an easier path in the ECAC tournament.

Watch: Sunday's game will be televised on NESN. Saturday's game is available via a paid stream.

The Huskies have a six point lead in Hockey East and are looking to ensure they stay on top. Providence is currently in a position to host during the first round of the Hockey East playoffs, but Merrimack is just three points behind them.

The Beanpot didn't go the way the No. 3 team in the country had hoped, so this weekend is important for them to bounce back and regain some of the momentum – and confidence – they may have lost. They have a pretty clear path to the NCAA tournament and a young team, so keeping them mentally and physically healthy during this toughest stretch of the season is of the utmost importance.

Providence has had ups and downs during the season but do have the talent to pull an upset in the Hockey East tournament and earn the auto-bid. They have some big wins over the course of the season, but also have some losses they certainly would want back.

They're another squad that could play spoiler and also build something they could carry over to next season.

Friday and Saturday at 3:00 PM Central

Watch: Sunday's game will be televised on NESN. Saturday's game is available via a paid stream on FloHockey.tv.

Wisconsin has a two point lead over Minnesota atop the WCHA. Wins in this conference are worth three points. The Badgers have the tougher path to the end of the season, with Minnesota Duluth this weekend and Ohio State next week while the Gophers have Minnesota State and Bemidji State.

Wisconsin swept the Bulldogs earlier in the year at home, but UMD has been significantly tougher in Duluth than on the road. Minnesota Duluth boasts gold-medal-winning goalie Maddie Rooney, but she'll have her work cut out for her. Wisconsin leads the NCAA in shots on goal with 1,183 while limiting their opponents to 486 shots, the second-lowest total in the country, for an NCAA-best +697 shot differential.

But even if they are able to put aside all those shots, they're going to have a tough time scoring, as well. The Badgers allow just 1.20 goals per game.

Beating Wisconsin isn't easy, but the Bulldogs have shown they can beat the top teams of the conference and the Badgers haven't been quite as unstoppable as they have been in recent years.

↑Wisconsin milestones –  Coach Mark Johnson was the first-ever Badger to have his jersey retired last weekend. Junior Abby Roque and Senior Sam Cogan each tallied their 100th career point in the weekend series against Minnesota State. They became the 25th and 26th in program history to reach the milestone.

↓Ohio State – The Buckeyes have lost six of their last nine games, including Saturday against Bemidji State and have dropped to ranked 10th this week.

↑Boston University – The Terriers won their first Beanpot as a varsity program and their second overall with a 3-2 overtime win over Harvard on Tuesday.

↓Mercyhurst – The Lakers put a serious dent in their CHA title hopes when they lost twice to Syracuse last weekend.

↑Princeton –  The Tigers clinched the Ivy League Championship last weekend with their 8-2 win over Brown. It's their sixth Ivy League title.

↑Boston College coach Katie Crowley – Thursday's win over Maine was the 300th in her career.