The first full week of June was a fun one in the basketball world. The WNBA has been in action for about a month now, and all 12 teams are starting to settle in. However, a few squads this week showed that they will be a force on the court as the season rolls on and we get closer to the playoffs. It's never too early to start talking postseason, especially with a condensed schedule this year.

But before that, the league's best players and coaches will square off in Verizon WNBA All-Star 2018 on Saturday, July 28, in Minneapolis, Minnesota. The WNBA announced last week that there will be a new format to the game this year. The two players with the highest number of votes will be the All-Star captains; they will then get to draft their teams from the rest of the All-Star players, regardless of conference. The voters (fans included!) can pick their dream teams from either conference as well. Voting opens on June 19.

We could see some new faces at this year's game based on the season thus far, especially last week's play. Let's dive in to the numbers.

12: Atlanta's margin of victory in its win over previously-undefeated Connecticut.

In the 2018 WNBA.com GM survey, the general managers of the WNBA named Atlanta the most-improved team in the league. And so far, they're playing like it. The Dream are currently fifth in the standings after a 3-0 week, which began with an 89-77 win over Connecticut at home (June 5). Tiffany Hayes led Atlanta with more than 20 points in all three games, including 22 against the Sun. For her efforts, Hayes was named the WNBA Player of the Week for the first time in her career. She currently ranks 10th in the league in points per game (19.8), but the entire Atlanta squad is clicking on all cylinders so far this season.

(Connecticut bounced back nicely, for the record.)

The Mercury also went undefeated this week, adding to their now-league-best winning streak of five games. It's something the folks behind Phoenix's twitter page had a little fun with. 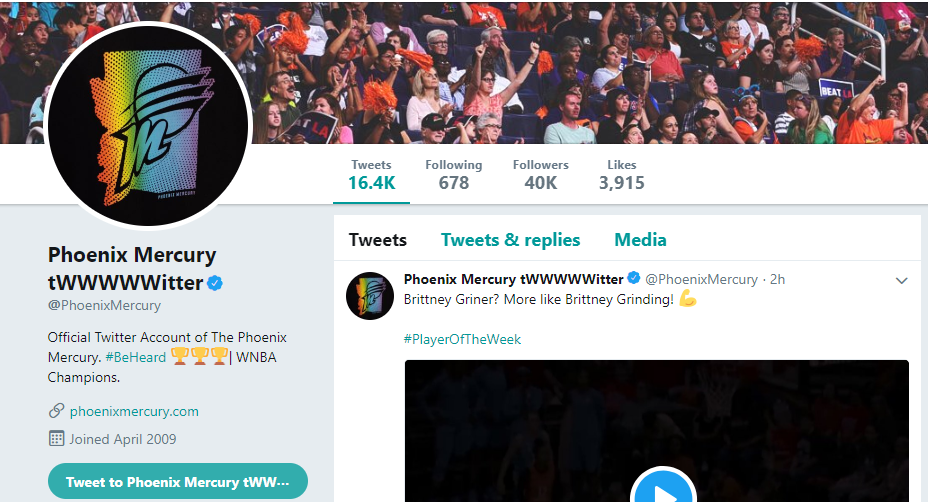 They also brought out a groan-worthy pun in honor of a monster week from Brittney Griner. She also won the WNBA Player of the Week award after dominating on both sides of the ball in her team's three games. Griner currently leads the league in blocks per game (2.9) while also hitting the top 10 in points per game (21.1, 3rd) and rebounds per game (7.5, 10th). However, much like Atlanta, expect this Phoenix team to only get stronger as the season goes on.

3: number of players in double figures in Las Vegas' loss to Phoenix on Sunday.

The Aces came close to upsetting the Mercury in Phoenix over the weekend. Still, Las Vegas has shown growth over the past few games. While A'ja Wilson continued her dominance with a team-high 17 points in Sunday's game, some of her teammates weren't far behind; Kayla McBride added 16 points and 2017 top draft pick Kelsey Plum added 12. Wilson has been playing very well, as expected, but it's nice to see other Aces players helping out, too. The ability for this franchise to do big things in its first year in Las Vegas is there, and Sunday's game is a key example of it. The same goes for Indiana; the team may still be winless, but they, too, are growing.

155: The number of games the Minnesota trio of Maya Moore, Rebekkah Brunson, and Lindsay Whalen have won together.

Many have noted that most of the Lynx starting five is... well, old, at least by WNBA standards. But with that experience comes a lot of wins, specifically for the Minnesota squad. Moore, Brunson, and Whalen are now the winningest trio in WNBA history after the Lynx's 88-80 win at Washington on June 7. The group surpassed Los Angeles' Tamecka Dixon, Lisa Leslie, and Mwadi Mabika, who won 154 games together.

In addition to the record-setting milestone by the trio, the Lynx's win in DC also broke the team's four-game losing streak. But it's fair to say that wasn't the team's favorite part about their trip out east. The Lynx decided to celebrate their 2017 WNBA title by giving back to a local elementary school.

“This group's legacy is that they have used sport as a vehicle of change, empowering and inspiring both women and men, both girls and boys, people of color, the LGBT community, people of faith and all underserved groups.

9: The number of points scored by Los Angeles in the first quarter in its loss to Seattle at home on June 7.

The Sparks found themselves in a hole quickly after the Storm put up 24 points in the opening frame. Los Angeles would cut into Seattle's lead during the game, but the away team matched the offense with a streak of its own every time. The Storm held the Sparks to a season-low 63 points in the win. Despite Nneka Ogwumike leading everyone with 19 points, Seattle held Candace Parker to just six in the contest. The 88-63 victory was Seattle's first in Los Angeles since 2015.

35: Combined margins of error in Chicago's past two games, both losses.

The Sky is also growing this season compared to last, but the team still has a bit of a hill to climb to beat the elite after this past weekend of play. Chicago started its west coast road trip Friday with a 17-point loss to Phoenix before falling 77-59 to Los Angeles on Sunday. Despite the lopsided games, the Sky show promise in the young season. Rookie Gabby Williams had a career-high 26 points in Phoenix, which led all players in the game. The mark ranks third among Sky rookies in a single game, tied with current Washington standout Elena Delle Donne in 2013. This year's Chicago squad also held its own against the Mercury, finishing with just under 52% shooting after falling behind 23-10 in the first quarter.

The Liberty went 1-1 last week, narrowly losing to Connecticut before getting a win against Indiana. On one hand, they're working on solving their problem of closing out games; New York almost gave Connecticut its second straight loss of the year before the Sun came out on top. On the other hand, the Liberty struggled to close out the game against the winless Fever. I'm not sure what to expect with the New York squad just yet, but maybe that's a good thing.

Week five looks like another big week of action across the league. A quick reminder that the italicized games are available nationwide, and you can watch most of the others on WNBA League Pass.