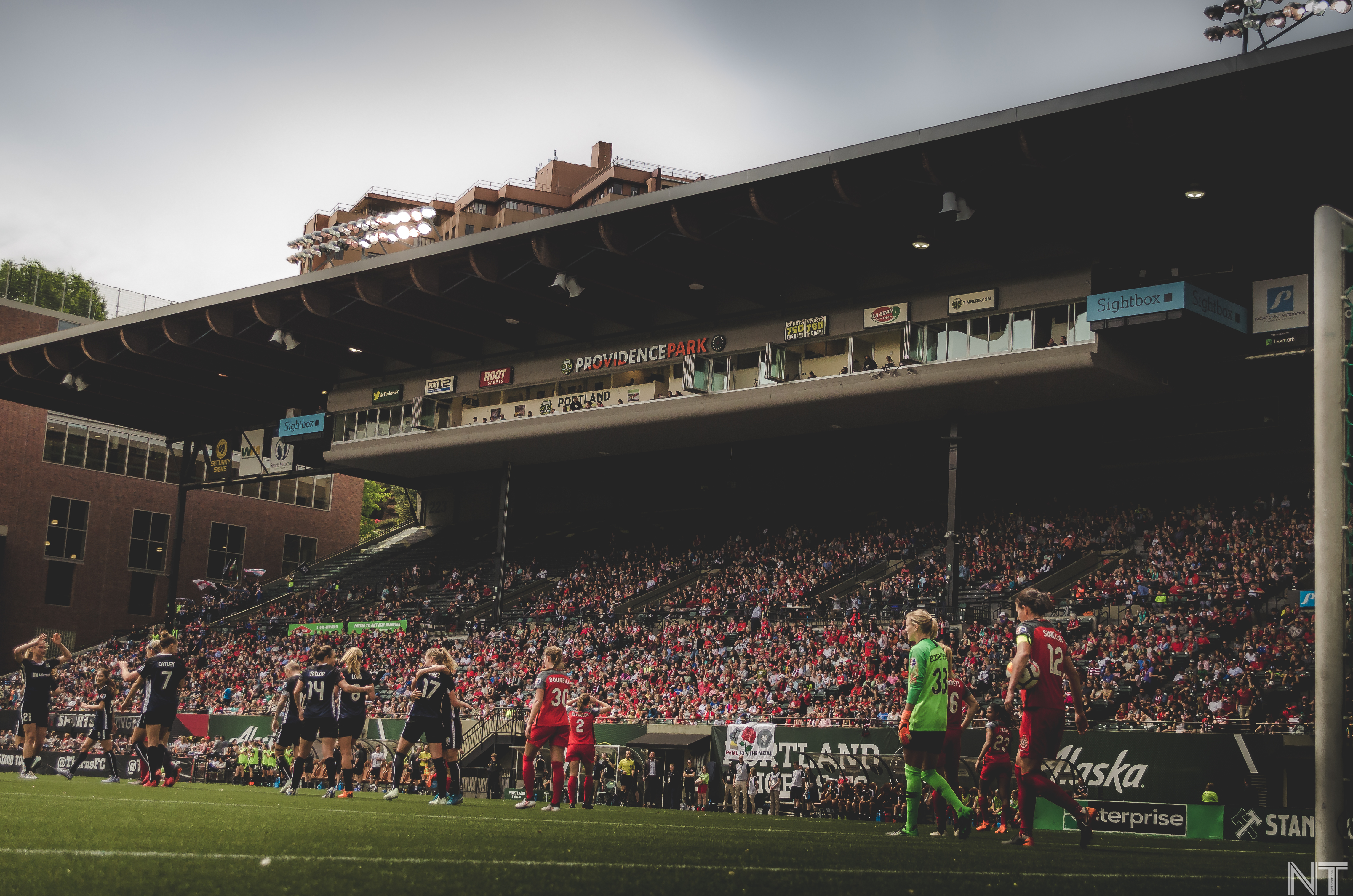 With the international break upon us, we only got one NWSL game this past weekend, an unmistakably depressing scoreless draw between the league's two worst teams.

With both teams looking frankly miserable both going forward and defensively, there were few takeaways from this one. Imani Dorsey, signed as a national team replacement player in Carli Lloyd's absence, got her first minutes for Sky Blue, so that's nice, I guess. Otherwise we were treated to an utterly flat first half and a second half whose most exciting moments were frantic penalty area scrambles. Making matters worse, in the 78th minute, center ref Christina Unkel awarded Washington what has to be the softest penalty I've ever seen in the NWSL, pointing to the spot after Mandy Freeman executed a perfectly clean tackle on Estefanía Banini and Banini fell. Andi Sullivan, perhaps burdened with guilt over the terrible call, proceeded to take the softest penalty kick I've ever seen in the NWSL, essentially passing her effort directly to Kailen Sheridan.

Now that's over with, let's take a look at the state of the league as a whole, 11 weeks in. Some things -- the seemingly unstoppable success of the Courage being the marquee example -- have gone more or less according to expectation. Others, like Chicago's apparent underperformance, have been surprises. Without further ado:

Comfortably at the top of the league is Paul Riley's North Carolina Courage, which, right now, is on track to end the season with best record of any NWSL team in league history.

That title currently belongs to the 2014 Seattle Reign, who finished the season with a 16-2-6 record and 54 points. After 12 games, the same point the Courage are at right now, they were sitting on 32 points. North Carolina is a little behind with 30 points, but they have yet to drop out of first place, and they have yet to meet a team that could mount a serious challenge to their hegemony. As if to demonstrate just how wide the gap between the Courage and everyone else is, two weeks ago they stepped onto the field at Providence Park and handed the Thorns a 4-1 beatdown, Portland's worst home loss since 2014.

As the season wears on, other teams may start to close some of the distance. It's no coincidence that North Carolina's starting lineup has undergone very little turnover since Riley took the helm in the Western New York era -- their only substantive change coming into this season was trading Ashley Hatch and Taylor Smith for the rights to Crystal Dunn, a move that would have instantly upgraded any team. Meanwhile, teams like Seattle are still working to integrate huge roster changes. For now, though, North Carolina look as much a juggernaut as any team in this young league ever has.

At the other end of the spectrum is Sky Blue, well on pace to close the season out with the worst record in NWSL history. They've found an absolutely abysmal two points in ten games. While Sky Blue has often found themselves treading water, what's blindingly clear in Sam Kerr's absence is that the Australian's record-breaking 2017 season covered remarkably well for a roster that was otherwise, well, quite bad overall.

Over the offseason, nothing much happened to fix the issues with that roster. At the start of the season, it seemed reasonable to suspect that Carli Lloyd, who was the difference-maker for Houston when she was available in 2017, might be able to carry this team to some extent. What that assumption missed was that Lloyd's Houston, despite their many issues, did have some world-class talent in forwards Rachel Daly and Nichelle Prince, and, probably more important, playmaker Andressinha. Sky Blue, meanwhile, with an often disastrous defense and one of the poorest midfields pound-for-pound in the league, was more or less dragged singlehandedly by Kerr to the middle of the table.

Vera Pauw, whose arrival in Houston was surrounded by doubts about how quickly a foreign coach with no club experience could adapt to the league, has squeezed a lot more out of a difficult situation than most observers predicted. Houston aren't good, by any means -- and at times they've looked quite bad -- but they also aren't the trainwreck their tumultuous offseason seemed to portend.

Christen Press debacle aside, the Dash taking the rights to Kyah Simon in the Boston dispersal draft was widely panned as one of the worst moves of the offseason. Taking Simon, who wasn't playing in the NWSL at the time, meant they'd be on the hook for the cap space and international slot Simon would occupy, unlike the 2017 Boston players, who came with yearlong exemptions. As it's turned out, that move was the right one, especially for a team with a Press-shaped hole up front: the attacking midfielder has been at the heart of Houston's offense. Linda Motlhalo, one of two young South Africans Pauw brought over, has proven those who doubted she was ready for the NWSL wrong. Together with Pauw's tactical smarts, this scrappy Dash roster has punched well above their weight at times, tallying draws against Portland and Chicago and beating Seattle.

Other than Sky Blue, who have been especially bad even for a team with the worst roster in the league, Washington and Chicago have been the big underperformers.

Going into the season, the consensus was that Washington had had the best offseason of any team. To a team that already included Mallory Pugh, the best young American in the pool, Jim Gabarra added a pile of young talent in Rose Lavelle, Andi Sullivan, Rebecca Quinn, and Ashley Hatch. Tellingly, though, he also continued his apparently systematic quest to drop every defender, trading Shelina Zadorsky for Aubrey Bledsoe and a draft pick, and leaving him with just two true centerbacks, Estelle Johnson and Whitney Church. With an out-of-form Taylor Smith holding down the fort at right back, the Spirit's defensive issues have been substantial; they're currently tied for the title of worst defense with 17 goals allowed.

Chicago's consistently underwhelming performances, meanwhile, have been something of a head-scratcher. Though they're barely out of playoff position in fifth place, this is a team that looks, on paper, much better than they have in person. There's no a priori reason for a team that's made the playoffs three years running, and only made one major roster move -- essentially trading Press, a top-five-in-the-world forward for Kerr, the best in the world -- to look as flat and listless as the Red Stars have. Except, perhaps, that Rory Dames is neither a very good player manager nor very tactically adept.

Middle of the pack (sort of)

The remaining teams -- Portland, Orlando, Seattle, and Utah -- aren't all literally mid-table, but each one is sitting more or less where most of us expected them to land in the standings.

Utah, the expansion side with big ambitions, was always going to have a rough time of it, simply because they're new. They've held on and grabbed some results, mostly by being rock-solid defensively, but their attack has been largely stagnant, with just nine goals, the second-worst in the league. Amy Rodriguez has come back from her ACL tear much the same player she always was, but even A-Rod can't run Utah's attack on her own, and finding a consistent connection between her and the midfield is what the Royals have struggled with. It's too early both in the season and in Laura Harvey's tenure with the Royals to make any grand pronouncements about whether her two amazing seasons in Seattle were flukes, but it's something to keep an eye on when we think about the coaching landscape in the NWSL.

Of the three non-Courage playoff teams, Seattle have been the most consistent (which, obviously, is why they're in second place). Vlatko Andonovski, who turned the Reign roster upside down in the offseason, has made a splash in Seattle, with a strong defensive corps and a fun, dynamic front six that includes Reign veterans like Megan Rapinoe, Nahomi Kawasumi, and Jess Fishlock, as well as newcomers Allie Long and Jodie Taylor. After two seasons of stagnation, Seattle's offense is finally exciting again.

Although they finally managed to win without Marta, breaking that drought in their 2-1 win on the road against the Thorns May 12 (also their first-ever victory over Portland), the Pride's form has been uneven. The attack is finally clicking pretty consistently; Emily Van Egmond has been a great addition to the Alex Morgan-Marta show they often relied on last year. Defensively, though, they've occasionally looked disastrous, their 3-4 loss to the Courage a few weeks ago being the worst example.

The Thorns, finally, have had a hard time absorbing some offseason changes to their roster, as well as some nagging injuries. There wasn't a huge amount of turnover in Portland, but the changes that did take place were big ones: the biggest was the loss of Amandine Henry, who played an absolutely pivotal role deep in the midfield. Henry is widely considered the best number six in the world for a reason, and there's simply no replacing a player of her caliber. Mark Parsons has tried to compensate by adding Andressinha and having Lindsey Horan take over those defensive midfield duties, but even Horan, a world-class player in her own right, is no replacement. Add in injuries to centerback Emily Menges and keeper AD Franch, both of whom were key players in Portland's championship-winning 2017 campaign, and the Thorns have dealt with their share of adversity.

The NWSL resumes the second half of its season on Saturday, June 16, with four matches scheduled: