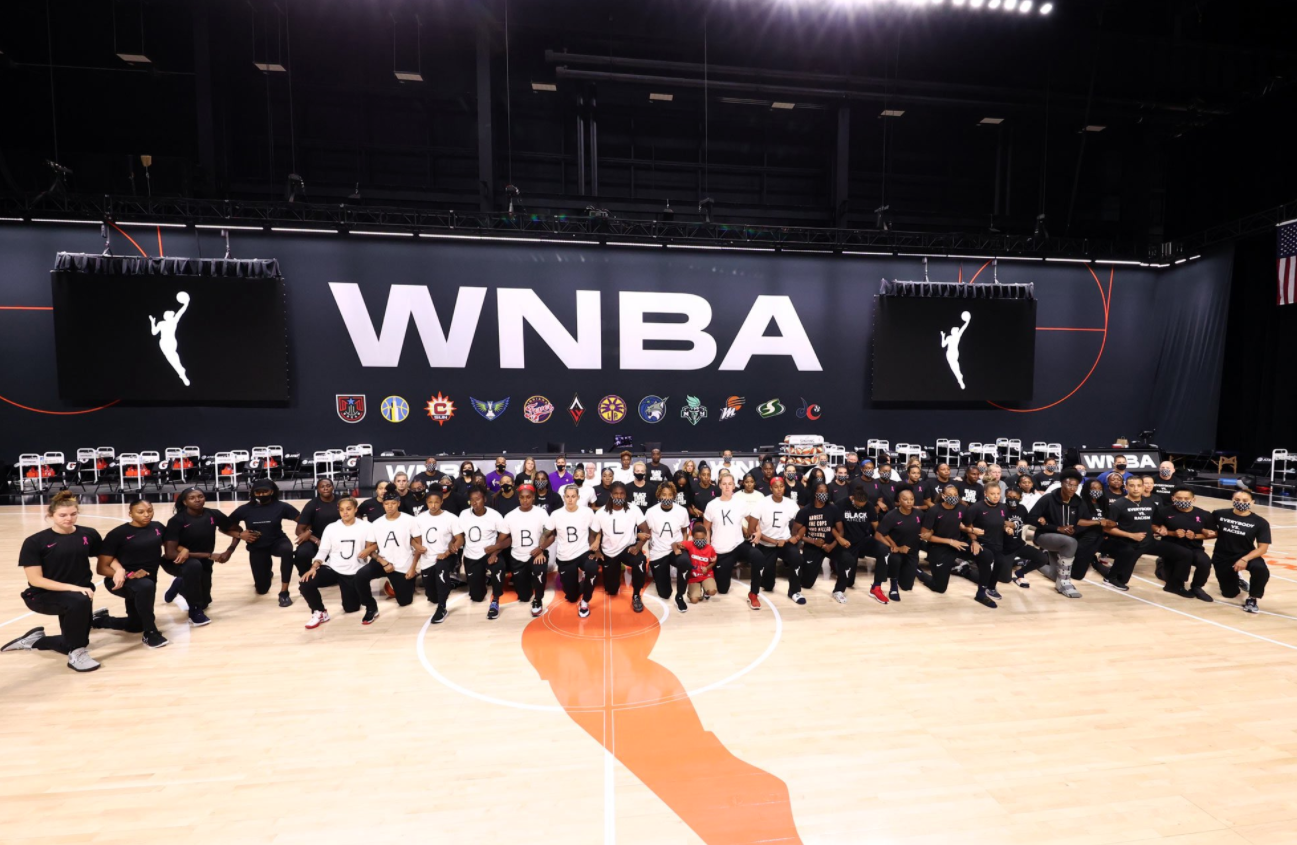 Three games (Lynx vs. Dream, Sparks vs. Sun, and Mystics vs. Mercury) are set to resume tonight. These games were postponed as players speak up against the shooting of Jacob Blake in Kenosha, Wisconsin.

Today, NBA and WNBA employees are on strike at the NYC office to continue this same energy.  Staff members are spending the day calling state and local officials to "demand justice for Jacob Blake and the police officers to be held accountable." This latter action is critical.

Early in the season, when the WNBA announced the social justice-themed summer, many of us loved the idea but had no idea what it meant in practical terms. Indeed, visual solidarity is essential. Yes, we should drop Black Lives Matter hashtags; yes, it's great to see people's names lost due to state violence on warm-up shirts, but what does it mean in practical terms?

Two weeks ago, I was stopped by the New York State border patrol as I was crossing the Goethals Bridge from New Jersey to Staten Island, New York. I had no idea why I was being asked to pull over. Upon handing them my license and registration, I ask what did I do.  They said I didn't do anything, then provided me a paper copy of the NY State executive travel ban order. They proceeded to ask if I traveled to the list of states on the back of the document. I assured the officers I had not. After 30 minutes of questioning, they dismissed me.

Section 1 of August 5th Emergency Executive Order they provided states: "I [Governor Cuomo] hereby direct that checkpoints be established at or near various New York City and New York State boundary crossings to educate individuals traveling from restricted states into  New York City about their quarantine obligations, pursuant to Governor Executive Order No.205 and the NYSDOH Order, and ensure compliance with such orders." It was a COVID-19 "education" stop.

Contact with the police is stressful. Period.  If you belong to a historically marginalized community that interaction can range from mild stress to death.  A hashtag or a T-shirt would not have kept me safe if the checkpoint stop escalated.

Hearing that league employees are using their day in solidarity to call local officials is inspiring. It helps me believe that the social justice theme isn't just a marketing ploy or an aesthetic choice. Instead, the league employees see themselves as change agents on and off the court. They are modeling the reality that there is more than one way to protest.  Players can protest, but so can people who work in finance, marketing, and operations. They are modeling protest options. For me, this is one of the most exciting actions I've seen in sports all summer.

I am not under any delusion that making calls to local officials would have kept me safe in my traffic stop a few weeks ago, but I do know that changing our social justice consciousness is a long-term game that has to be driven by strategy. Given that it is an election year and we are in pandemic, applying pressure to local and state governments makes sense. It's one way to hold them accountable as we push towards even greater change.

The WNBA staff are trailblazers. Period. Their boldness is changing, right before our eyes, how NBA players and other athletes in men's leagues are collectively responding to world events. Now let's hope the industry begins to recognize these players and staff for their value and pays them accordingly, both in contract negotiations and in the value and visibility ascribed to the WNBA in the media.