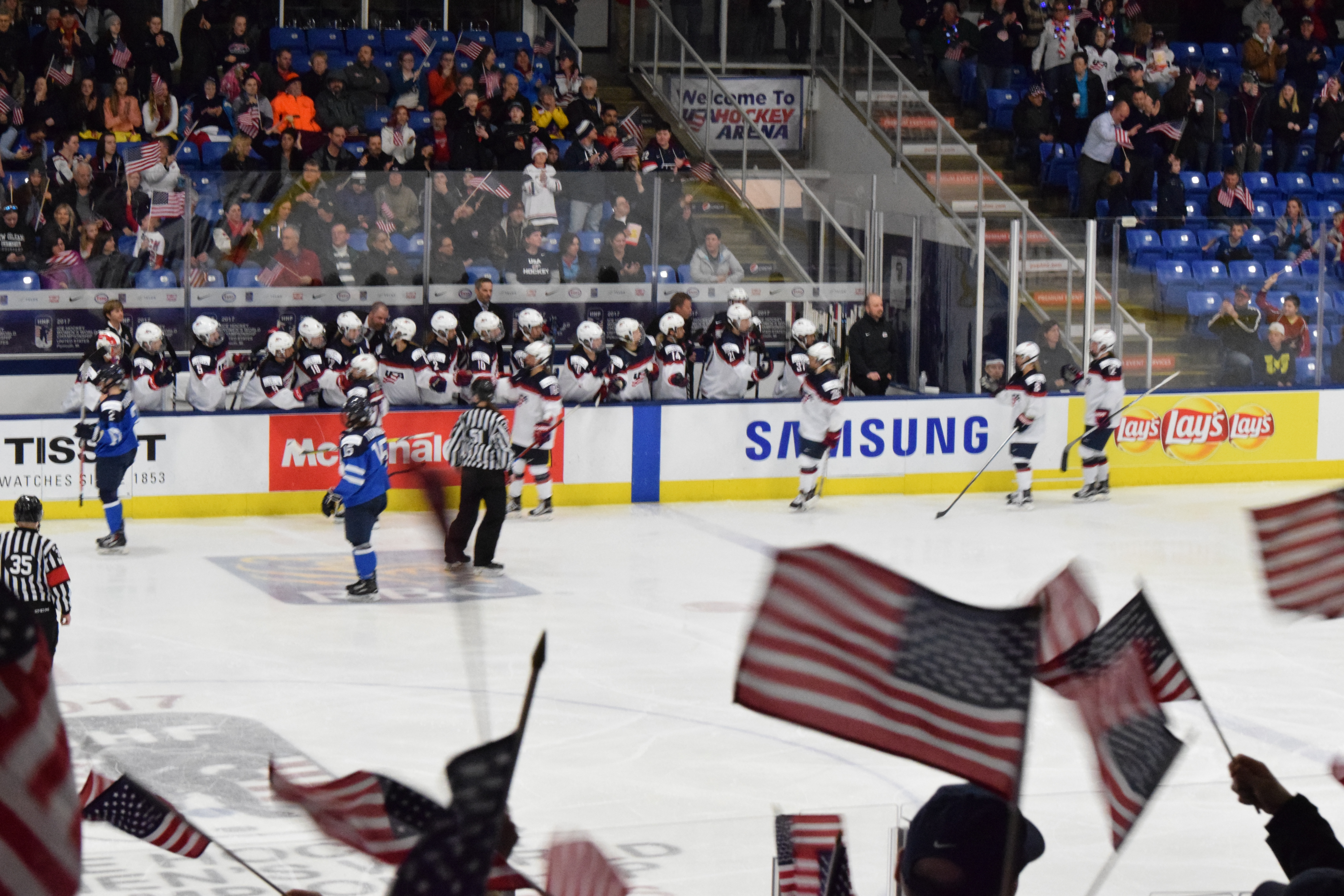 Too many penalties kept the Finns from established a rhythm and gave Team USA way too many opportunities on Monday evening.

The Americans are the only team to sweep their opening round games, but Finland took advantage of some lapses, especially on the defensive end. Captain Meghan Duggan repeated more than once that Team USA is focused on their own game and isn't too concerned about one opponent or the other. Monday's game showed places that they can work on with their two subsequent days off.

"[We're going to] focus in on us. We can clean up a few areas. Really when you have them on the ropes, just finish the game. When it's 3-1, you have to pull away to 4-1 or 5-1. We didn't do that initially, but we were able to come back. I'm proud of us today. There's a few things we can clean up over the next couple of days," she said.

Despite the loss, there were once again a ton of positives for Team Finland to take away, including the fact that they scored 7 goals in two games against the US and Canada.

The prevailing feeling among players in the Mixed Zone on Monday was that now the real tournament begins. Anything that happened in the opening rounds is mostly irrelevant. The teams will learn from those games, but they outcomes don't matter. Each team looks to grow over the course of the tournament, and they've all got the tournament to make waves in these upcoming rounds.

"We should be the ones carrying the puck most of the time. We just have to forget these games because they really didn't matter in the end. Tomorrow's actually the first day of the tournament and now the games that matter actually start," said Finland's goalie Noora Räty.

Quote of the Day, from USA Captain Meghan Duggan

"My goal was to not let any Gophers score, but Hannah got one there in the end, so I'm pretty mad about that."

The Canadians needed a boost of confidence and found it in the form of an 8-0 win against the Russians. When USA beat Finland in regulation time, Canada earned Group A's second bye into the semi-finals. For all the worry and "sky is falling" hair-pulling that followed their loss to Finland, Canada found itself in exactly the position they thought they'd be -- with a bye to the semi-finals and one game from a medal.

Everything that had been missing in their first two games -- crisp passes, tape to tape pucks, strong transitions, and gritty play -- were evident in Monday's win. Every player, as well as coach Laura Schuler, talked about focusing on (and executing) "the little things."

"We're very confident and we've obviously got a lot of talent. We just needed to believe in ourselves and believe in our ability and come out today and just play hockey," said Meghan Agosta. "Every little thing counts. It starts with that. Just working hard and battling. I think that we came in to the rink prepared to do whatever it took to win today's game and we're very proud of each and every one of us."

Schuler, who was the subject of a lot of speculation following the loss to Finland, seemed relieved to see her team return to form.

"Their belief in the game plan is critical. We talked about scoring goals the right way and I think the goals we scored today were a result of doing the little details that are important for success. As long as we have buy-in, it will be good for us moving forward," she said.

Haley Irwin was the voice of reason following the win over Russia. Schuler called her the most intelligent player on the team and her thoughtful responses in the Mixed Zone -- and her deliberate play on ice -- lend credence to Schuler's characterization.

While everyone talked about little things, Irwin specified and visibly did many of them on the ice.

"[Today we had a] willingness to block shots and I think that was missing the first two games from every single person. Every single time you have to be willing to do those things and today I think you saw that complete game," she said.

The Swiss had to win to even have a chance at the quarterfinals, and they did so in emphatic fashion against a previously unbeaten German squad.

They had a power play goal waved off early, but responded with three goals in four minutes to take a lead that they'd never relinquish. Germany made an attempt at a comeback in the final frame, but the Swiss held them off and iced the win, with an empty-net goal from Alina Muller to give her a hat trick on the day.

"We came out a little bit nervous, but had good chances at the beginning and had two quick goals and played really well. We kind of lost it there at the end a little bit and let them come back with the penalties and let them back in the game. And we shouldn't do that anymore. Now we're happy with the game and we're hoping for the Czechs," said Lara Stalder.

In their first game, the Swiss needed a shoot-out to get the win... and then they lost to Sweden. Monday's win felt like the kind of validation the team needed -- as well as a confidence boost.

"We played with a lot of fun and then we played well. We lost it in the third period a little bit, but we tried hard to get it back and we stayed cool," said Muller.

Muller and Stalder have been a particularly successful pairing for Switzerland in this tournament. Stalder assisted on two of Muller's goals, and Muller returned the favor on Stalder's tally.

Despite the loss, German coach Benjamin Hinterstocker was happy with how his team responded after the disappointing first period.

"The last shift of the first period, we came back, and then the team showed good character and performance. We played the second and third periods like we have the past few games," he said.

All the focus has been on Team USA and, more recently, Team Finland, but Team Germany has quietly been the surprise of the tournament. Newly promoted, they came to the tournament with a roster that was split evenly between defense and offense and most assumed they'd be playing for their top-tier life. Instead, they went 2-1 in the opening rounds and earned themselves a quarterfinal berth.

They'll play Russia, who haven't had the most promising tournament. There's no reason that Germany won't be competitive in that game. Should they make it to the semi-finals, it would definitely qualify for the upset of the tournament, even though Finland will probably get more attention.

Placing atop Group B in the year following relegation says wonderful things about the promise of that program, Olympic qualifying results be damned.

One of the most interesting subplots to this tournament has been how significant coaching changes have been for many programs. Some of the changes are recent, but in the case of Germany and Finland, the changes made two or three years ago are paying dividends. Both Hinterstocker with Team Germany and Pasi Mustonen with Team Finland have breathed new life into their programs and are seeing results on the ice.

Robb Stauber seems to be a great match for the chemistry and creativity of the Americans and is content to let them be the best players they can be.

Hinterstocker brings a calmness to the German team -- he's very deliberate and does a great job of drowning out any outside noise.

"Obviously, he's a really good coach and he's never really negative. He's always talking about a unit. It's a team, so we all have to play together and do what he asks us to do," said German forward Marie Delarbre. "In the first period we weren't focused, so we have to be careful and be there in the moment right away and do the plays our coach asks us to do."

In 2015, Hinterstocker made the decision to take the group of players he had who were born in 1996 and move them up to the senior squad from the U-18 roster. Now, just two years later, those players have a number of international games on their resumes and the experience to handle themselves. It was a calculated risk, but one that seems to be paying off.

There hasn't been a Finnish player in the Mixed Zone that hasn't praised either Mustonen directly or the new and improved system and style of play that he's implemented. Mustonen has made the program a priority -- he's been an outspoken proponent for federation support and he's asking the players to make being a professional hockey player a priority, which is something that hasn't necessarily been the case in the past. From fitness and diet to focusing more on offense than defense, the Finns have a totally revamped program -- thanks to Mustonen.

Sweden punched their own ticket into the quarterfinals with a win over the Czechs that sent them and Switzerland to the relegation series.

The Czechs scored first, but Sweden came roaring back and dominated the rest of the game.

The Czechs managed just a single goal in each of their opening round matches, something that they'll obviously look to improve in the coming years. They are a young squad still with a ton of potential. With seven players currently playing in the NCAA, they've shown they have players committed to developing themselves. Hockey East Rookie of the Year Tereza Vanišová had a great start to the tournament and she'll continue to grow.