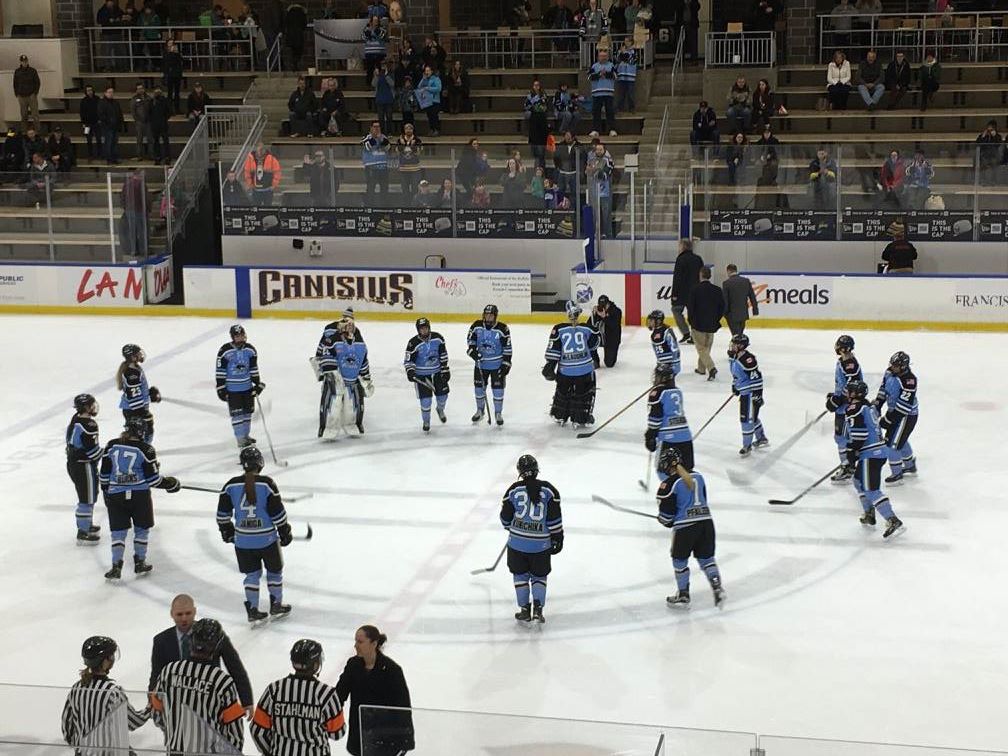 Redemption, after all, is exactly what the Beauts found when they captured their first-ever Isobel Cup Championship over the reigning champions, the Boston Pride. It was the ultimate rematch, and this time, Buffalo found a way to win.

The championship capped a season that was otherwise not a major shift from the inaugural Beauts season. After going 5-9-0-3-1 in their first season (accruing 14 points), the Beauts went 6-10-1 this season, for a total of 13 points.

For the second straight season, that left them in third place in the NWHL standings when the regular season was complete. Throughout the regular season, the Beauts often had trouble finding their feet and couldn't string together a pair of wins. An alternating series of victories and losses throughout much of the season was surrounded by losing streaks of three and even four games.

In fact, the only time the Beauts were able to put together consecutive victories were their final three games of the season: their regular-season finale, the Isobel Cup playoff game, and the championship game.

What made the difference for the Beauts this season, then? Undoubtedly, the shift from lengthier playoff series to a single-game elimination helped.

Last year, the Beauts took care of Connecticut in three games, which was a surprise when considering their winless record against the Whale in the regular season.

After playing three games in as many days, Buffalo had four days off before the Isobel Cup Finals began. In the 2016 Finals, the Beauts tried their best to keep up with Boston. They lost the first game in overtime, and scraped together a goal too late in the second game for it to matter. Those two games also happened only 24 hours apart, meaning that the Beauts ended up playing five games in nine days.

This year, it was a one-game win over the Riveters in the playoffs that took Buffalo to the championship. Two days later, Buffalo and Boston were left to face one another in the final again -- and many of the numbers were stacked in the Pride's favor, as always. They were undefeated throughout much of the regular season, had potent offense and strong goaltending, and many expected them to win.

But this time, the Beauts seemed to have fresher legs, this being just their second game in three days. They found ways to get the Pride just enough out of position, forcing Boston players to make small mistakes that added up. The Beauts got the Pride goaltender out of her spot. One small thing, then another -- that's what made the difference.

And of course, Brianne McLaughlin's incredible performance in goal for Buffalo didn't hurt, either. In the end, it was the Beauts who came out on top.

The biggest loss for Buffalo between the first and second seasons was the departure of Meghan Duggan to Boston. Undoubtedly, the loss of Duggan hurt -- but over the course of the regular season, the Beauts were led largely by two new players in Corinne Buie and Shiann Darkangelo, both of whom registered 12 points on the season.

Emily Janiga was also stellar in her rookie NWHL season, with 11 points (6G, 5A), matching that of Kourtney Kunichika (2G, 9A). Of course, Megan Bozek's ability to play both defensively and offensively was a crucial part of the Beauts' success. And don't forget Kelley Steadman; she averaged over a point per game, notching 10 points (5G, 5A) despite appearing in only eight games.

Goaltending was equally important for the Beauts. While Brianne McLaughlin carried the majority of the workload for Buffalo -- including that incredible 60+ save performance in the Isobel Cup Final -- Amanda Leveille also found her feet in the NWHL. Leveille is expected to be the Beauts' top netminder heading into next season.

Next season will also be an interesting one for Buffalo, as they've already lost several players to retirement.

After appearing in just six games this year, defender Anne Schleper announced her retirement. Brianne McLaughlin has hung up her skates. Harrison Browne, one of Buffalo's best forwards over the last two seasons, has stepped away from the game, and so have Devon Skeats and Ashley Vesci.

Altogether, those are some big pieces missing on the Beauts next season, leaving holes for team management to fill. Perhaps players like Hayley Scamurra, who signed a deal with the Beauts late in the season, and other draft picks, like Lee Stecklein, can help.

How can the Beauts possibly top this season? Well, like with any sports team, there are always things to improve. After consecutive third-place finishes, Buffalo will look to move up in the standings next season, in hopes of securing a home playoff game for the first time. Consistency throughout the regular season will help move them up the ranks.