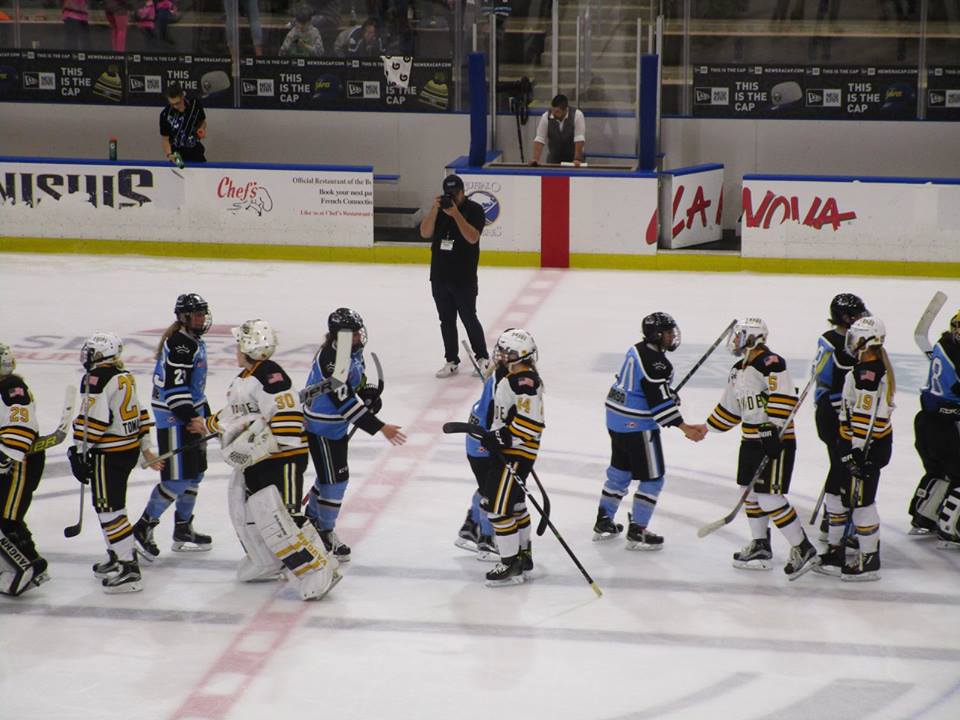 It's always interesting to see how a championship team enters the year following their big win. After all, you won the biggest prize -- how can you possibly top that?

That's the situation the Boston Pride faced heading into the 2016-2017 NWHL season. Coming off their Isobel Cup championship victory -- the first ever in league history -- how could they be even better?

They managed to find a way, as for much of the season, the Boston Pride were, well, perfect. Undefeated night after night, game after game. They always found a way to win and were undefeated for nearly the entire 2016-2017 NWHL season...until the end.

Over the course of the 2016-2017 NWHL season, the Pride picked off game after game. They sailed through six games against the Whale and five each against Buffalo and New York, leading up to their regular season finale on March 12.

Their unblemished record hit a snag on March 12, when they fell to the New York Riveters 3-2 in the last game of the regular season. Of course, despite their single loss, they maintained a stranglehold on first place in the league, and ended the season 16-1-0 with 32 points. That was an improvement over their inaugural season record of 14-3-0-1 with 29 points.

The Pride would return to their winning ways on March 16 with a decisive 8-2 win over the Connecticut Whale. It was a game that showed exactly who the Pride were: a powerful, deadly offense supported by a strong defense and good goaltending.

That game was also a particularly interesting one, as it was played the day following the US Women's National Team's announcement of their decision to boycott the 2017 Women's World Championships. The Pride/Whale game was a great display of the talents of the USWNT players, as seven of the 10 goals were scored by national-team players. National-team players also added a combined 12 assists that night.

But it was the last game of the year, the Isobel Cup Final, where the Pride's near-perfect season would truly be spoiled. Despite the odds, the Buffalo Beauts captured the NWHL championship with a 3-2 victory that night.

Everything seemed to be stacked in Boston's favor, but it was the Beauts who came out strong early in the game, taking a 2-0 lead in the opening twenty minutes. They got Boston off their game just enough and went up by three in the second. Though the Pride roared back to score twice late in the third, the Beauts' superb goaltending (in the form of Brianne McLaughlin) proved to be too much.

Despite the spoiling of their perfect record, and the eventual Isobel Cup Final loss, the Pride had a spectacular season. They didn't lose a game between January 10, 2016 and March 12, 2017 -- a span of 27 games, including their 2016 Isobel Cup victory.

It'd be easy to sit here and go over every Pride game with a fine-toothed comb, but let's sum it up this way: over the course of the season, the Pride outscored their opponents 73-29. They were the only team with a positive goal differential (an astonishing +44) and they scored 79 percent of their goals in the second and third periods. Even when they did find themselves down by a goal or two, they roared back with a strong finish.

Despite playing only 17 games (compared to NY and Connecticut, who both played 18), the Pride scored the most goals in the league and had the most shots on goal (611). They registered 10 power-play goals, 19 power-play assists, and an NWHL-high 12 shorthanded points (7G, 5A).

Brittany Ott led all NWHL goaltenders with 10 wins, and Lauren Slebodnick led the league in GAA (1.22). Ott was second with a 1.93 GAA. The duo also led the NWHL in save percentage.

So yes, the Pride were outstanding -- yet again.

Of course, they were already good heading into the season, as they're stocked with a roster of talented players, many of whom are on the US National Team. That roster was bolstered by the additions of players like Meghan Duggan, Alex Carpenter, and Lexi Bender. All three proved to be great additions to the Pride, as they played big both offensively and defensively.

With that, the Pride will be an interesting team to watch next season. Being stacked with national team players has been a huge help the past two seasons, but with the Olympic year looming, they'll have to find ways to fill in their roster and win without those players.

Without players like Knight, Marvin, Carpenter, Bellamy, Decker, Pelkey and Duggan, who are the Boston Pride? That's one question they'll have to answer over the course of the offseason and as they head into next year.