The preliminary match between Team USA and Team Canada in the 2016 IIF Women's Worlds was knotted at 0-0 for much of the evening, but it wasn't short on action. At both ends of the ice, goaltenders Alex Rigsby and Emerance Maschmeyer were repeatedly called upon to make huge saves; and after a close, tense, checking first period, the game opened up with intense and relentless speed.

As much as goaltending took the spotlight, special teams was a major storyline through two periods, as Team Canada took six penalties in the first 40 minutes of the game. Despite extended time skating 5-on-3, the Americans were unable to capitalize on the advantage. The Canadians' forecheck and breakout was superior for much of the game, and Maschmeyer looked unbeatable. Team USA, skating without one of their top defenders in Kacey Bellamy, seemed to be having trouble with their breakout. Emily Pfalzer was one of the most successful defenders at carrying the puck up-ice on her own to start the attack, but was often stymied at the Canadian blueline before getting it deep. 19-year-old Megan Keller of Boston College, making her second appearance in the senior IIHF tournament for Team USA, was particularly hesitant with the puck, failing to take shots and leading to multiple giveaways.

Keller also took the first penalty for Team USA (a holding call) at the tail end of the second, which led to more power play time for the Canadians at the top of the third. Laura Fortino picked up a rebound in the slot and put it past a sprawling Rigsby to give Canada a 1-0 lead.

After Keller took her second penalty, Team USA put together a successful kill and came right back to tie the game. It was Hilary Knight with the equalizer, smoking a shot past Maschmeyer that found a seam between her glove hand and left pad. Maschmeyer had been stopping everything; and so late in the game, it was a turning point.

The tides then fully turned halfway through the third period. After successfully killing a kneeing penalty to Jocelyne Lamoureux, Team USA got yet another power play chance with Team Canada's veteran defender Meaghan Mikkelson in the box. This time, they were able to make Canada pay, as Brianna Decker buried a rebound from in tight to give the USA a 2-1 lead. The goal came with just over six minutes to go, and it wasn't enough for Canada to mount a comeback.

Hilary Knight added an empty netter with 20 seconds remaining, and the final score would be 3-1.

This was a hard-fought game between the two best national teams in the sport, and it hardly felt like a preliminary game. Some notes:

Via the IIHF, here are the standings after Day 1 of the tournament: 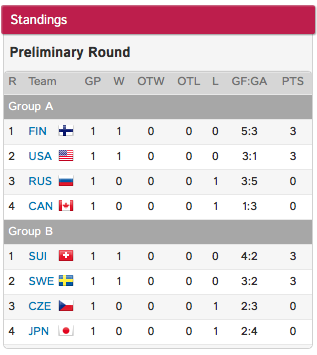