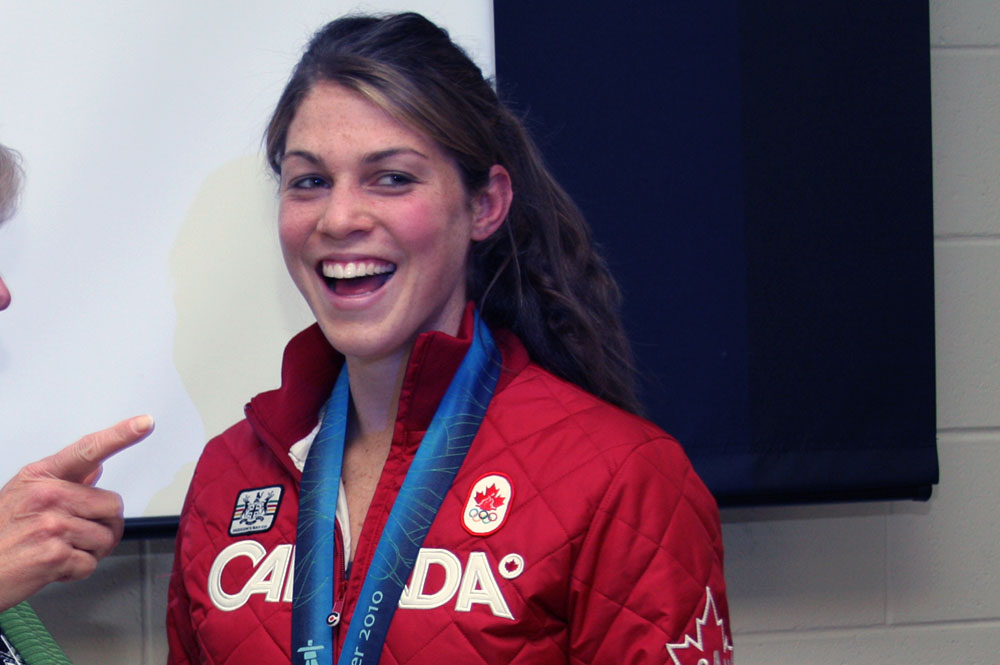 When Rebecca Johnston put on an Inferno jersey for the first time this season, she had no issues making an impact.

It wasn't until February 13 that Johnston played in her first CWHL game of the season, but she finished the contest with two goals and an assist as Calgary defeated Les Canadiennes.

"When you get into the first games of the season, that adrenaline's going and you're excited to play," Calgary coach Scott Reid said. "I didn't see her having any troubles jumping into the lineup. She didn't rush it, she didn't come back early, so she was ready to go when she was called upon."

"She's got great hockey sense [and an] ability to make plays when there's nothing really available," Reid said. "All of a sudden, she creates some plays offensively."

Johnston knew she would return just a few weekends before the Inferno played Les Canadiennes.

"I felt pretty good, actually," Johnston said. "The first game especially, I felt good and rested. I think I was really excited to be back playing and it was a long time since I'd played a game, so I think that kind of got me through it."

"The second game I was a little bit sore, but I think it was overall it was a pretty good weekend for me, especially being off for so long and then coming back and being able to play two pretty intense games in a row."

The forward had missed almost the entire season due to back and hip flexor issues. Though Johnston's hip prevented her from playing hockey, her back caused the hip issues. To aid her return, Johnston did physio exercises every day.

"I was able to get on the ice, but [I'm] slowly progressing to full speed," Johnston said. "I can only start off at 50 percent at the beginning of the year and work my way up to 100 percent.

"The main thing was the 100 percent was kind of what was causing me to pull my hip flexors, so I had to strengthen certain areas to get everything stable before I could give it a hundred percent."

Because Johnston was receiving injections for prolotherapy, her return depending how her body would react to the shots -- leaving no timetable for a return.

"It really depended how I dealt with that and how my body was feeling throughout the process," Johnston said.

The two-time Olympic gold medalist had never been injured like this before, and was unfamiliar with spending most of her time watching the game instead of playing.

"The toughest thing for me was sitting in the stands watching and not being able to contribute or play the game that I love to play," Johnston said.

"There's just a lot of the unknown of not having a specific deadline of when I can come back to play...Just the long process was kind of tough on me also."

But even as a spectator, Johnston still tried to help her teammates by identifying areas to improve and providing pointers for teammates.

"Watching in the stands, you obviously have a bird's eye view of the game, so you really notice a lot of things," Johnston said.

"It's a lot easier to see it from the stands than on the ice, so I was able to kind of take that all in and really learn a lot from that."

Johnston, who joined Calgary last season, was the 2014-15 league-leading scorer with 25 points.

"When you have an offensive player like that, sometimes their D zone may waver a little bit because they want to play offense so badly," Reid said. "Just making sure she kind of takes care of her zone and offense will look after itself for her."

Before Calgary, Johnston played at Cornell. She graduated in 2012 after being a Patty Kazmaier Finalist three times. She was the ECAC and Ivy League player of the year as a senior, and was the Ivy League Rookie of the Year as a freshman.

"My decision-making and kind of my patience on the ice, I think I've really developed that and learned that it's not always a game of just going full-speed all over the ice," Johnston said. "There's areas where you need to kind of calm down and make the right play and sometimes it's to slow down and sometimes it's to speed up. But I think that decision-making and that patience with the puck I improved on over the last couple years."

Thanks to Johnston's timely return, Calgary has a chance to play for the Clarkson Cup. And they'll pass through home ice first.

"We have a lot of really talented players and I think our biggest strength is our speed, so we really thrive and succeed on the big ice surface," Johnston said, referring to the Inferno's home rink at WinSport and its Olympic-sized ice.

"We get home ice advantage in our big rink and I think that's a positive for us, we have a lot of speed on our team."