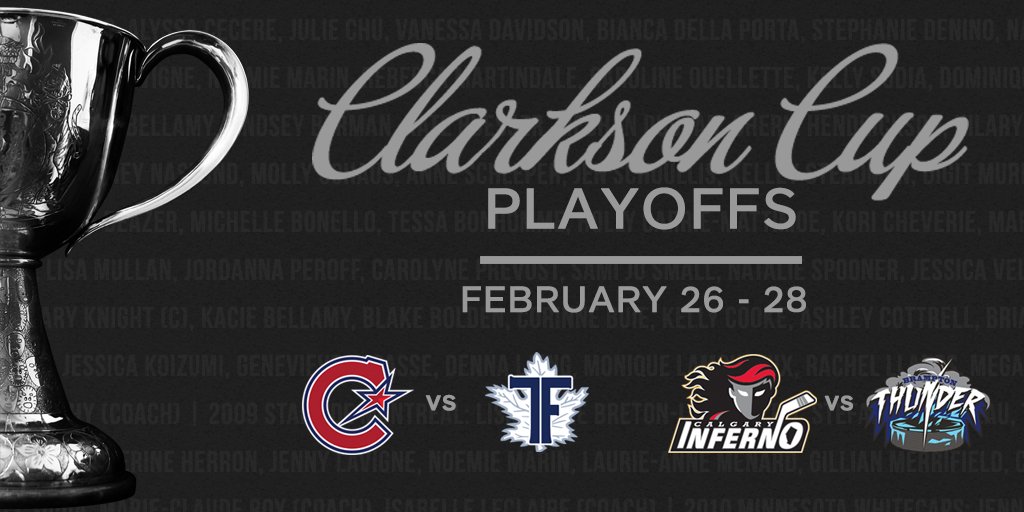 This CWHL playoffs kick off this weekend as four teams battle for a spot in the Clarkson Cup Final. Each semifinal will feature a best of three series.

The Furies will travel to Les Canadiennes' home rink in Montreal, while the Thunder and Inferno will square off for the second week in a row in Calgary.

Here's the schedule for the semifinals:

Les Canadiennes are the top team in the league and they've had a near-unstoppable offense, led by Marie-Philip Poulin, Ann-Sophie Bettez, Caroline Ouellette, and Kim Deschênes.

While the offense has been powerful, Charline Labonte has played well when she's been tested.

“A goaltender is so important at the championship. This weekend she’s going to shine, we know that," Breton-Lebreux said. "She [hadn’t] faced a lot of adversity last weekend, but against Calgary and against Brampton before that, and Toronto before that, there was a lot more shots and she had to shine to stop them so she’s very important to us. So we have a pretty good setup right now I think.”

The area of weakness Les Canadiennes sometimes has comes from their defense, and Breton-Lebreux has emphasized in the past that the team needs to work on their execution. Breton-Lebreux said the team will work on the power play and breakouts this week.

"At this point of the season, we’re just touching a little bit on everything we’ve been working on," Breton-Lebreux said. "A little bit, like 10 minutes of every aspect and try to cover as much as possible, but special teams is always a big part of our practice for the next few weeks.”

The Inferno entered the season as the deepest and best team on paper. They finished second in the league over the regular season, and didn't really come close to overtaking Les Canadiennes. But the Inferno just got one of their best players back in Rebecca Johnston.

Calgary head coach Scott Reid said he was impressed with the play of Elana Lovell, Blayre Turnbull, and Jill Saulnier. Lovell and Saulnier are the team's second and third highest scorers.

"They've definitely stepped up, and we also have our regular top players that we thought we'd get production from," Reid said.

One of Calgary's biggest strengths is not only its speed, but also its depth. With a lineup like Calgary's, it's tough to play against them.

"We have a lot of really talented players and I think our biggest strength is our speed, so we really thrive and succeed on the big ice surface," Rebecca Johnston said. "I think that's definitely a positive thing leading up the playoffs -- we get home ice advantage in our big rink."

The only weakness for Calgary in the playoffs could be goaltending, as Delayne Brian struggled last weekend.

"We play a certain game, we've accomplished what we wanted to do so far, which was our first goal -- making the playoffs -- and we've enabled ourselves to do that," Reid said. "And finishing in a position where we get home ice advantage, so moving forward we just got to keep on our path and our structure and system that we're putting into place, and hopefully, things should fall into place."

"I think we've learned to consistently be a better winning hockey team and I think hopefully that'll translate when we play Calgary this weekend," head coach Tyler Fines said.

The Thunder have all-around been a good team, but sometimes struggle with keeping leads and keeping teams out of their net.

Rookies have also been a big part of Brampton's success, with draft pick Rebecca Vint finishing third on the team with 26 points. Vint's 19 goals are a team high.

*Knox was injured late in the season and has not yet returned.

It's been a tough season for the Furies, who started the year playing without Julie Allen and Jenelle Kohanchuk. Toronto has struggled with consistency this season, but has a huge offensive threat in Natalie Spooner and a reliable backstop in Christina Kessler.

"It takes 60 minutes of hockey and putting that together is hard each and every night," Toronto coach Sommer West said. "It’s something you've got to do to be satisfied at the end when you hold that cup up," coach Summer West said after Toronto's last weekend of the regular season.

The Furies can score, though, and they've proven they can do so against the top teams.

Toronto was the only team that didn't play last weekend.

“It allows us to go over more videotape and go over more things in practice and slow things down a little bit and get a little more prepared," West said. "But at the same time I think not playing in the weekend, sometimes going into that first game when you haven’t played in a week you tend to maybe start a little slower, be a little soft. That’s going to be something we have to prepare the [players] for next week and this week.”

Les Canadiennes swept the season series against Toronto this year. They've also only lost once in the past few months when they dropped a 4-2 decision to Calgary. Before that, Les Canadiennes' last loss was in December.

Les Canadiennes bring one of the most explosive offenses in the league, but the Furies have had some success in stopping them before.

Toronto will have a tough time countering the top line of Marie-Philip Poulin, Ann-Sophie Bettez, and Kim Deschênes.

“In practices we need to work on controlling their space and making them go to places where we want them to go and not allowing them to come back on us and beat us in those spots," West said.

"[We need to] prepare for their power play because they have a very dangerous power play. And [we're] really working our power play this week, so when we go in there next weekend we can perform at a higher level.”

The key for the Furies will be to use Natalie Spooner to open up their offensive attack.

“I think we will be faced with a very fast player like Spooner, so we’ll have to watch for her as well as playing in our defensive zone," Breton-Lebreux said. "So defensive zone coverage will be something to work on as well as watching for Spooner, she can [create] some speed.”

Les Canadiennes also have the defensive and goaltending edge, since defense has struggled a bit for Toronto this season.

The Thunder have put up lots of goals against Calgary -- including a seven-goal performance once this season.

These teams can keep up with each other in scoring, and both seem to get some pretty good chances against each other.

Fines said Brampton's toughest challenge will be Calgary's speed, which is amplified by the Inferno's big ice.

"We have to match them and we have to shut them down when they come through the neutral zone," Fines said.

"When you have that many possible Team Canada women, you've got experience on there. They have a good group of women who play hard hockey."