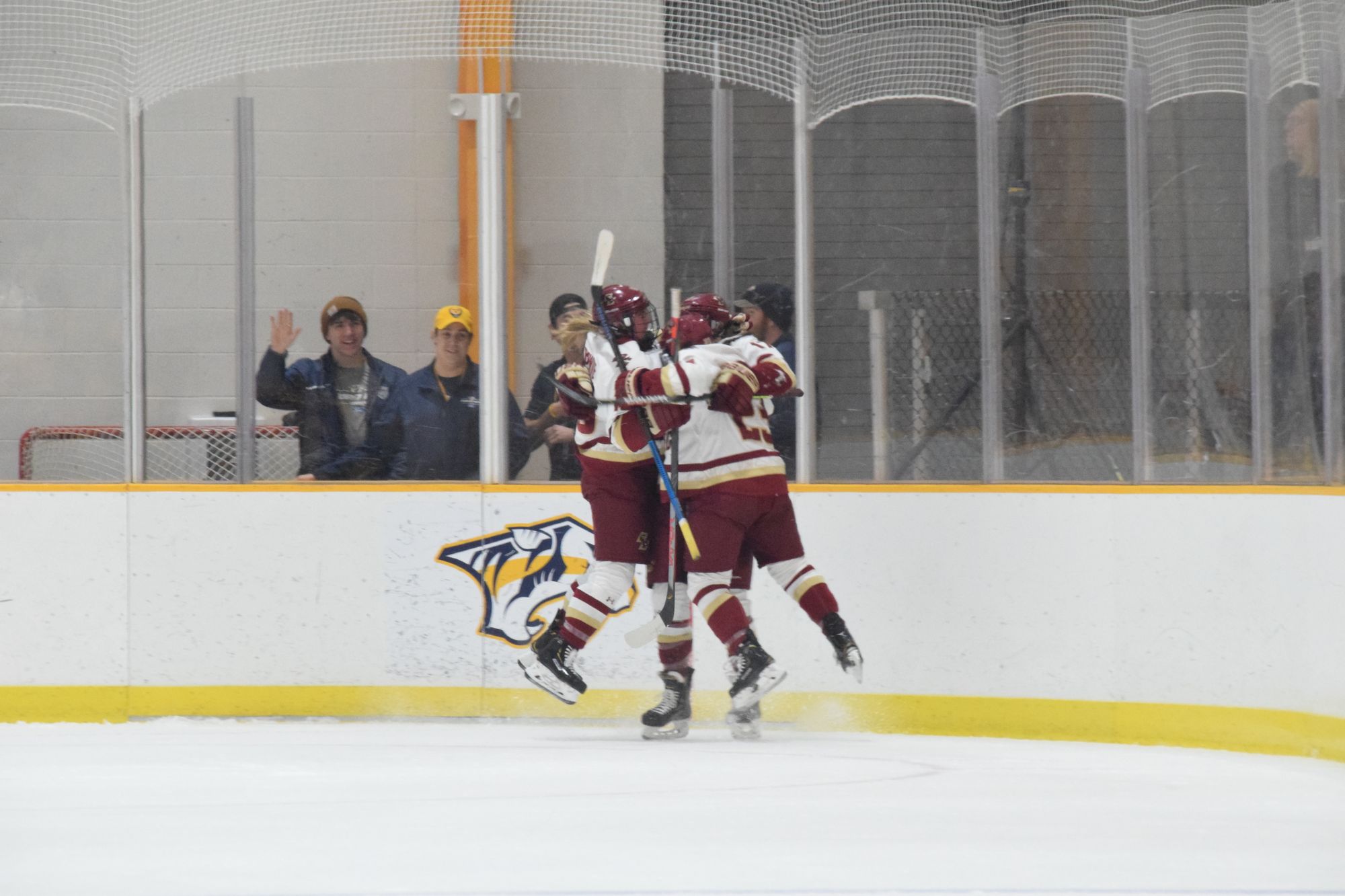 In Bellevue, Tennessee, a  fast-paced, energetic, and entertaining hockey game between (1) Minnesota and (6) Boston College ended in a 2-2 tie on Friday afternoon in the Nashville suburb of Bellevue. After feeling each other out in the first period, Boston College controlled possession in the second period. It was all Minnesota in the third frame and overtime period, but Boston College weathered a 15-1 shot disparity in the third to earn the tie.

The Eagles capitalized during Minnesota power plays twice with shorthanded goals – the first two the Gophers have given up all year.

Late in the first, Caroline DiFiore took an elbowing penalty. Just seconds before it ended, Delaney Belinskas jumped on a pump deep in the Eagles' defensive end and saw an opening up the ice. She took off and made it 1-0 Boston College.

Less than a minute later, Taylor Wente and Amy Potomak got an odd-player rush of their own. Potomak carried it down the right side and fed it to Wente, who tied the game.

It wasn't until late in the second period that Kelly Browne put BC up again with another shorthanded goal. She capped off her breakaway with a bar-down goal to put the Eagles up 2-1.

It was a head's-up play from an underclassman that coach Katie Crowley said has shown a lot of growth this season.

"Kelly Browne, to have the poise to do what she did on that goal [was impressive]. She's a sophomore, but she's playing like a junior or towards a senior," said Crowley.

Speed is a big part of Boston College's game and their quick feet and vision down the ice were on display for both shorthanded goals. Not many teams find getting the jump for a possible short-hander worth the risk of leaving the defense even more vulnerable to the potent Minnesota power play unit.

But Crowley said she is okay with her team taking those chances. While the Eagles have had top-tier speed in recent years, the team has struggled at times with balancing a high-powered attack with a strong defense. That doesn't seem to be the case this season.

"Defense is just as important as offense. When you make a good play in the defensive zone, it will translate into offense. You have to just keep playing that 200 foot game," said BC's Hannah Bilka. "They came back, but we kept playing our game, kept playing defense first. We just stayed together until the end and a lot of people were blocking shots, we kind of stayed together as a team and finished it. They have a lot of really skilled players, but with our defense, we can play against any team."

The Gophers had four power play opportunities and two in the third period stole any momentum Boston College had gained in the second. Alexie Guay took both penalties, and she's a defender that would normally spend much of a penalty kill on the ice. With her out of the play, the rest of the penalty kill unit defenders had to take longer shifts. The Eagles started to show fatigue as the third period wore on, but the Gophers were only able to exploit it once.

Grace Zumwinkle tied the game midway through the third period just as a power play expired by pouncing on a puck that looked like it might have been covered by Maddy McArthur. But the play was not called dead and the Gophers tied it up.

Boston College was able to stymie Minnesota's power play unit, forcing them to the outside and not letting them get too close to the net.

"Their power play is dangerous, so you just have to really be careful. They try to suck you out there and I thought we did a good job of containing, but when we had that opportunity to bite I thought we were able to do it," said King.

The game was not decided in overtime, so it goes down as a 2-2 tie. The teams decided on a sudden death shootout to decide a winner. McArthur stopped Amy Potomak and Bilka scored for BC to give them the "win."

"We thought about a few other players, but Hannah is so gifted and elite when it comes to scoring goals like that. I was really happy for her to be able to put that home. She's had a couple of breakaways this season and has missed on them in the game," said King.

Bilka, a freshman, said she didn’t remember much about the shootout, but that she just tried to put it in the back of the net.

“Maddy McArthur made a great save. It’s a lot easier when it’s to win a game, not to keep it going. You kind of just have to have fun with it, enjoy the pressure,” said Bilka. “(Scoring that goal) helps with my confidence, but I’m learning as it goes on.”

It took Wisconsin a few periods of building momentum to really find their stride, but when they did, the goals came in bunches and the Badgers ultimately claimed a 5-1 win over the Crimson in the Nashville suburbs on Friday evening.

Wisconsin out-shot Harvard 57-15, including 20-3 in the first period, but when the horn sounded at the end of the opening frame, the Badgers had nothing to show for their work. But despite their dominance and opportunity to get frustrated, the team wasn't playing pressed and eventually the goals started to come.

Presley Norby opened the scoring midway through the second period and added another goal for a 2-0 lead less than three minutes into the third period. But Harvard cut the lead to one as Kristin Della Rovere was able to pounce on a rebound in front of the net.

The Badgers were finally able to capitalize on their dominance in shots and puck possession later in the game, when they seemed to find more answers for Lindsay Reed in net. The Badgers knew what to expect with Reed after she made 85 saves in two games against Wisconsin last season.

"[Reed is a big net presence] and we're on a small rink, too, so we just focused on hitting the net and getting pucks on her pads and crashing the net and hopefully put some in there," said Norby.

Wisconsin played with patience and did not panic when Harvard made it a one-goal game. Instead, they wore down the Crimson and were able to pull away late. Daryl Watts, Brette Pettet, and Alexis Mauerman all found the back of Reed's net in the final six minutes of play to open the game up and secure the win for Wisconsin.

"I thought for 60 minutes, it was probably our best game of the season," said Wisconsin coach Mark Johnson. "Our last three games, our first period has been good. We focused in on that task, and then we started to come out and establish something against an opponent you don't see very often. The first period was good and then we built on the second. It was still a tight game, but the effort was consistent throughout the entire thing, and that's really what I think was important... I just liked the way we played overall. We did a good job, had a lot of momentum throughout the entire game, so we're very pleased."

Though Wisconsin pulled away in the final few minutes of the game, Harvard kept it close for more than 50 minutes and were able to hold the potent Badger power play scoreless on three opportunities. Reed tied a career high with her 52 saves.

Wisconsin is facing Boston College at 11:00 AM Central, while Harvard faces Minnesota at 4:30 PM Central.