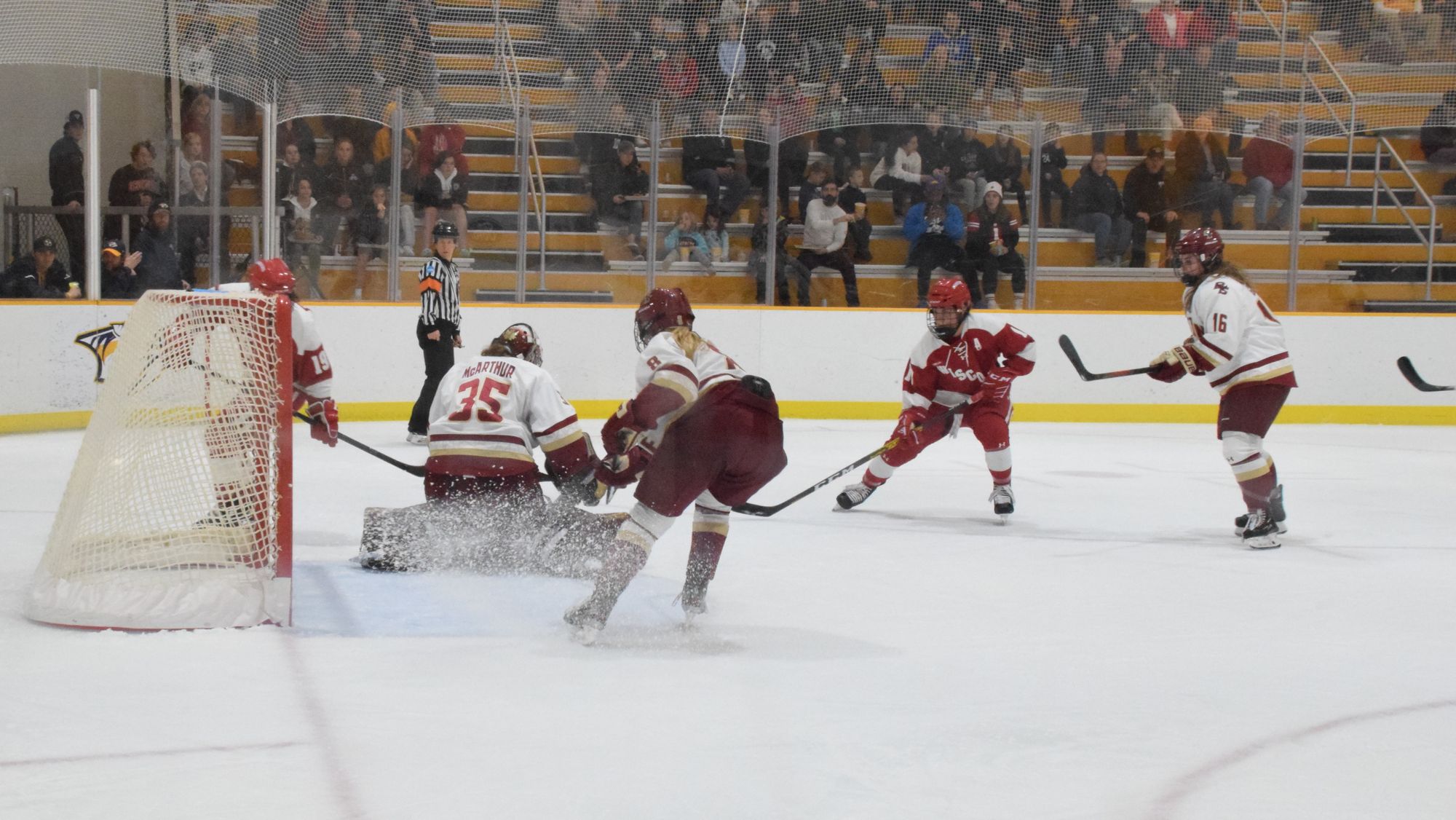 This isn't technically a tournament, but if we were going to declare a winner of the Country Classic in Nashville, it would be the Wisconsin Badgers, who are the only team to come out of the weekend with two wins.

It was mission accomplished for the Badgers, said Abby Roque.

"Making sure we came out with two wins is what we set out to do," she said. "It's a good building block."

Boston College's game is focused on speed and moving up and down the ice as a unit. It's one of the reasons they're able to overpower so many teams. But both Minnesota on Friday and Wisconsin on Saturday were able to keep pace with the Eagles, creating what BC's Delaney Belinskas said were likely some of the quickest games any of these teams had played in all season.

Wisconsin seemed to finally find their stride late in the third period of Friday's game, but they were able to carry that momentum into Saturday's tilt and get off to a strong start, taking a 3-0 lead after the first period.

The first goal came off a deflection in front of the Boston College net. Maddy McArthur made the initial save, but the puck ended up in the back of the net and Sophie Shirley was the last Badger to touch it.

Britta Curl extended the lead less than three minutes later as she snatched a puck out of the air in the neutral zone and took it in herself. She beat McArthur short-side from a narrow angle to make it 2-0 Wisconsin.

Just before the period ended, Roque gave the Badgers a three-goal lead with a power play goal that she sniped top-shelf as she was looking to cycle the puck and was moving across the top of the near circle.

Boston College was able to claw back a bit in the second. Savannah Norcross tipped one in right in front of the net on a pass from Hannah Bilka to make it 2-1 and then Caroline DiFiore showcased the speed and vision that was served the Eagles so well this season. She made a stop just inside her own blue line and then took off down the ice with the puck. Her top-shelf shot made it a one-goal game.

Penalties created interesting opportunities early in the third period, but neither team was able to capitalize. Delaney Drake extended the lead, making it 4-2, when she put the puck between McArthur and the near post on a rebound from a Presley Norby shot.

But the Eagles were not done yet. Cayla Barnes cut the Badgers' lead to one again on a power play with less than six minutes to go. A loose puck and a scrum in the crease led to some chaos and a goal for Boston College. But they would not be able to complete the comeback.

Sophie Shirley's neutral-zone steal and feed to Daryl Watts for an empty net goal secured the 5-3 win for Wisconsin.

Despite the loss, Boston College is very happy with their play this weekend against the top two teams in the country.

"These are the games you play for. These are national-championship-type games," said Barnes. "We went down early, but we never gave up and we came back. I think that's a testament to what a good team we are."

The top-ranked team in the country bounced back from Friday's tie with Boston College to earn a decisive win over Harvard on Saturday. The game was the culmination of the Country Classic in Nashville, which brought women's Division I college hockey to the area for the first time.

The game was characterized by a number of great saves by both Sydney Scobee and Lindsay Reed. Reed came up with 39 saves on Saturday, bringing her weekend total to 91. The goalie was a huge reason both games the Crimson played this weekend for close for much of the time. She also got a huge contribution from her defense, who tallied 18 saves on Saturday.

"I thought that today especially, we did a great job competing with them. We didn't necessarily get the bounces we wanted, but as a team I thought we battled hard. Hopefully we'll face them again later in the season,” said Harvard's Dominique Petrie.

Minnesota had puck luck on their side as a few odd bounces led to their early goals. The game was far closer than the final scoreline indicated and despite the 4-0 loss, Harvard players came away from Saturday's game feeling like they'd redeemed themselves a bit after Friday and proved that they have the ability to play with the top team in the country.

"If we can bring that kind of energy, we can stay with anybody. We're much happier with how we played today. I thought it was a great team effort, we had a ton of energy. It didn't go our way at times, but there's a lot we can take from that game," said the Crimson's Ali Pepers. "We learned we can skate with anybody. We can bring a lot of pressure. We're a tough team to play against. That's something we pride ourselves on and something we really reflected today.”"

Sarah Potomak redirected a shot that beat Reed to open the scoring and Alex Woken doubled the lead less than two minutes later. In the third period, Abigail Boreen scored her first of the year and Potomak added an empty-netter to secure the win.

"I thought we were really good tonight; we defended well. We were able to apply the pressure to a really hot goaltender and I'm really happy with the win here,”"said Minnesota coach Brad Frost. "After that first period, you can get frustrated in a game like that. We had a ton of really good chances, but [Reed] was really good. For a big goaltender, she challenges really well, so there's really not a whole lot to shoot at."

Minnesota closes out their first half with the US Hockey Hall of Fame Museum game against Minnesota State on Saturday at 3:30 PM Central. Harvard will head to Yale for a game at 7:00 PM Eastern on Friday and Dartmouth at 3:00PM on Saturday.