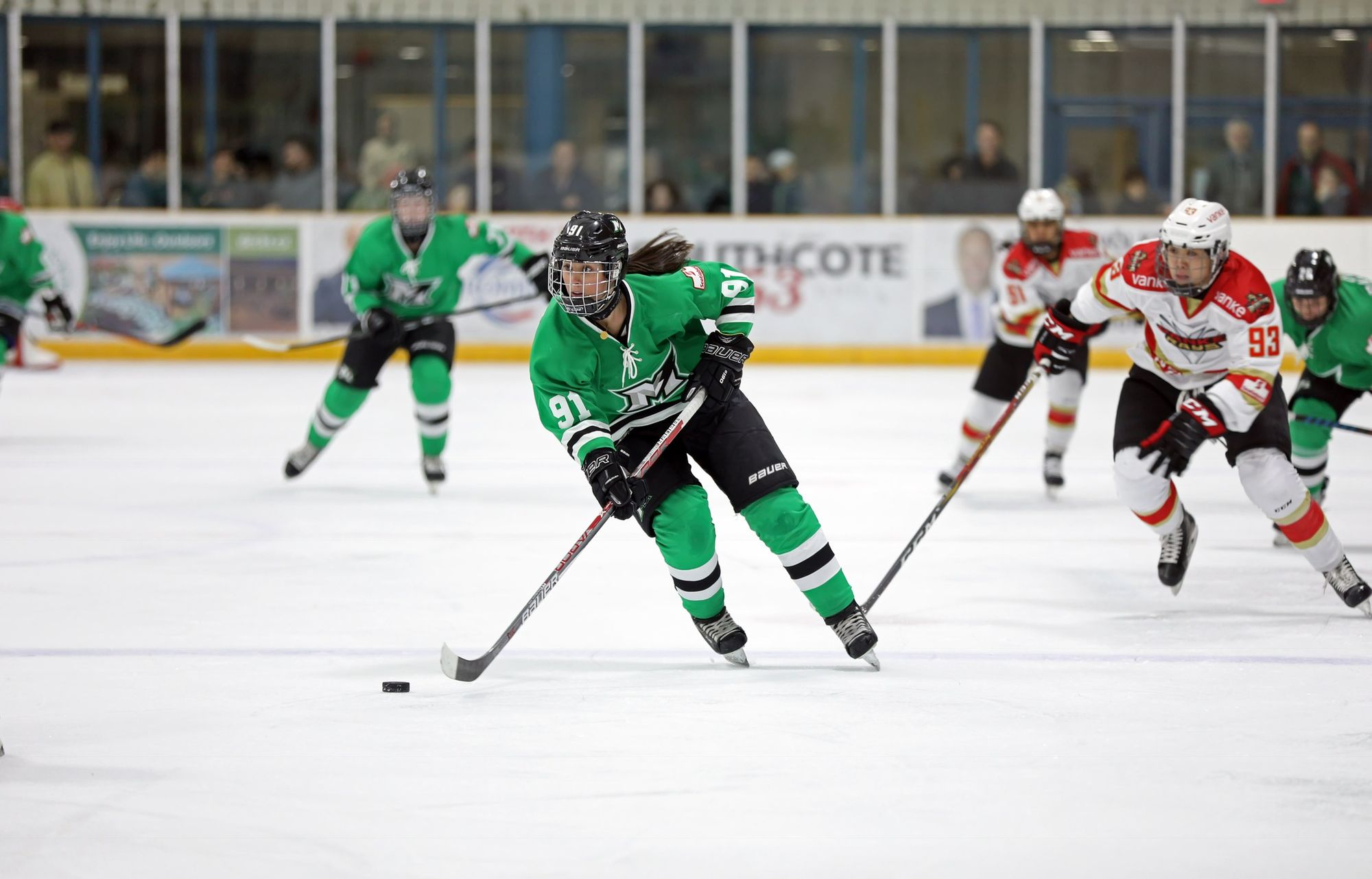 Plenty of players hit personal milestones this week as the Markham Thunder split with the Shenzhen KRS Vanke Rays, Les Canadiennes de Montréal beat the Toronto Furies by a little and then by a lot, and the Calgary Inferno comfortably swept the Worcester Blades.

Thursday's game was played in Ancaster, Ontario, to celebrate 20 years of girls hockey in the community. It's also the hometown of Laura Fortino, who took the ceremonial face-off.

The first period was all about special teams, as the two sides combined for six penalties. Laura Stacey scored the game's opening goal with a shorthanded marker at 15:10, but Cayley Mercer evened things up 37 seconds later for the Rays.

Hannah Miller netted a shorthanded goal of her own at 7:01 of the second period (the penalty that led to it being shorthanded is not listed in the box score, but was reportedly a tripping call on Liu Zhixin). Jenna McParland then tied the game at 2-2 with 2:05 left in the frame.

The Rays killed all of their (presumably) eight penalties, though they gave up a shorthanded goal. Markham neutralized three infractions while also allowing a shorty.

Saturday's contest was a goalie duel between Räty and Erica Howe that stayed scoreless for over 57 minutes until Victoria Bach capitalized on a sharp-angle shot on a power play, putting Markham ahead with 2:34 remaining.

The Thunder were 1-for-5 with the extra attacker and killed off two penalties.

Howe made 24 saves to earn the shut-out, while Räty stopped 34 of 35 pucks in defeat.

The Blades managed to hold the powerhouse Inferno goalless through the first period on Saturday, killing off two penalties in the process, before Kelty Apperson opened the scoring at 6:45 of the second. Kacey Bellamy doubled the advantage at 11:50, and Blayre Turnbull added a shorthanded tally at 16:58.

Venla Hovi made it 4-0 just 1:20 into the third, and Brigette Lacquette rounded out the scoring at 4:54.

"Between the top lines we did very well on face-offs won -- we won half of those face-offs," he noted. "We look at shots on net and we've improved on our shooting, getting the puck to the net. We worked on defensemen getting pucks through so that they can't block them, so we're doing a lot of positive things."

Calgary was 2-for-2 on the penalty kill while Worcester killed off all three, but allowed a shorty.

Annie Bélanger made 17 saves to earn the shut-out in her first CWHL start, while Mariah Fujimagari stopped 42 of 47 opportunities.

Brianna Decker scored the first power play goal of the weekend at 15:45 of the opening period on Sunday, and Apperson made it 2-0 just 32 seconds later.

Lauren Dahm replaced Fujimagari for the second period, but the Inferno took advantage of the cold goalie by scoring three times in a three-minute span, beginning with Turnbull at 1:09, followed by Eden Murray's first CWHL goal, and then one from Rebecca Leslie. Rebecca Johnston made it 6-0 at 18:21.

"We're down 2-nothing [after the first period], we have to open it up -- you've got to get a goal, so you want to start opening things up," explained Kennedy. "Then they get better chances, and with the skill level that they have, you give them a little, they take a lot. But you have to do that; you have to try to get that win, try to get that goal."

Fujimagari reclaimed the crease for the third. Dakota Woodworth increased Calgary's lead 90 seconds in, Brianne Jenner tallied with 43 seconds remaining, and Halli Krzyzaniak made it 9-0 just five seconds before the final buzzer.

The Inferno were 1-for-3 on the power play and killed both their penalties.

Taking just six penalties throughout the weekend despite being overmatched was a good sign for the Blades.

"In the beginning [we were taking too many] in-zone penalties, penalties that you shouldn't be getting like tripping, holding -- that shows that you're behind the play and not in the play," Kennedy said. "We worked on that and we've done pretty well at it; we're getting better."

Bélanger turned away 23 shots for the clean sheet. Fujimagari saved 31 of 36 shots through 40 minutes, while Dahm stopped 17 of 21 in the second period.

The Blades depart for Shenzhen at 6:00 AM on Saturday, and will have some time to adjust and practice before their first game on Tuesday. Players across the league have emphasized the important team bonding opportunity the trip presents, and Worcester intends to take full advantage. Kennedy is also looking forward to having the same full group available in practice as during the games, which isn't always possible when balancing work schedules at home. In a sport where most athletes are still part-time, the week in China marks a rare moment when everyone's together with nothing to focus on but hockey and each other.

The Blades played Shenzhen twice in pre-season, losing 6-0 (despite a scoreless opening two periods) and 2-0. Based on that, what would Kennedy would like to see from his team in the rematch?

"Scoring goals! It would be really nice to put two or three goals a period in the net. When we played them in the beginning, we were still in our camp mode, so we had 20-something players on the bench, three goalies on the bench, everybody got their shift, everybody got their turn -- including all the goalies. When we go there now we're in the season, so we go down to our lines and we have our lines all marked out. They're getting to play together a lot, so good things can happen. And it's the same thing with them -- they've been together for a long time, so they they have to be getting better. Hopefully things work and we get a few lucky bounces here and there and put some pucks in the net, and get a good feeling on it and come home with at least a win."

Part of the emphasis ahead of the trip and in their pre-game practices in Shenzhen will be preparing to play on the wider Olympic-sized ice surface.

"Our young forwards are pretty quick and pretty fast, so if you just play it a little smarter and see what happens... It changes the whole outlook of the game," Kennedy noted. "It changes the game a lot, so it can work for you and also can work against you as well if you're not used to it.

"There's only certain teams that we're going to really play against hard and have a really good chance to look good, and this is one of them," he added of the trip's importance. "So being there that length of time, putting together a string of things would be really good."

The Toronto Furies used their speed and gave Montreal a tough challenge on Saturday, but Les Canadiennes managed to kill off six penalties en route to a 1-0 win.

Erin Ambrose scored the lone goal of the contest, on a quick shot at 12:17 of the second period.

Emerance Maschmeyer turned away 21 pucks to earn the shut-out, while Shea Tiley saved 22 of 23.

Les Canadiennes broke away on Sunday with a 7-0 victory. Katia Clément-Heydra was promoted to second-line centre between Jill Saulnier and Hilary Knight, and the swap paid off. She replaced Sarah Lefort, who took three of Montreal's six penalties on Saturday.

Mélodie Daoust opened the scoring 5:47 into the game with the only goal of the first period.

Knight tapped in a cross-crease pass from Clément-Heydra at 4:14 of the second. (This is officially credited as Clément-Heydra assisted by Knight, but multiple folks in attendance have reported that this is wrong.) Ann-Sophie Bettez buried a pass from Marie-Philip Poulin at 9:16, and Clément-Heydra made it 4-0 a minute later.

Tracy-Ann Lavigne added to the advantage at 13:05 of the third, Olivia Atkinson got her first CWHL goal 36 seconds after that, and Taylor Willard rounded things out with her first career goal on a power play at 16:44.

Les Canadiennes were 1-for-2 with the extra attacker and perfect on three penalty kills. Through six games, their penalty kill has yet to allow a goal.

Maschmeyer made 17 saves to accumulate her 10th CWHL shut-out, while Tiley allowed seven goals on 40 shots.