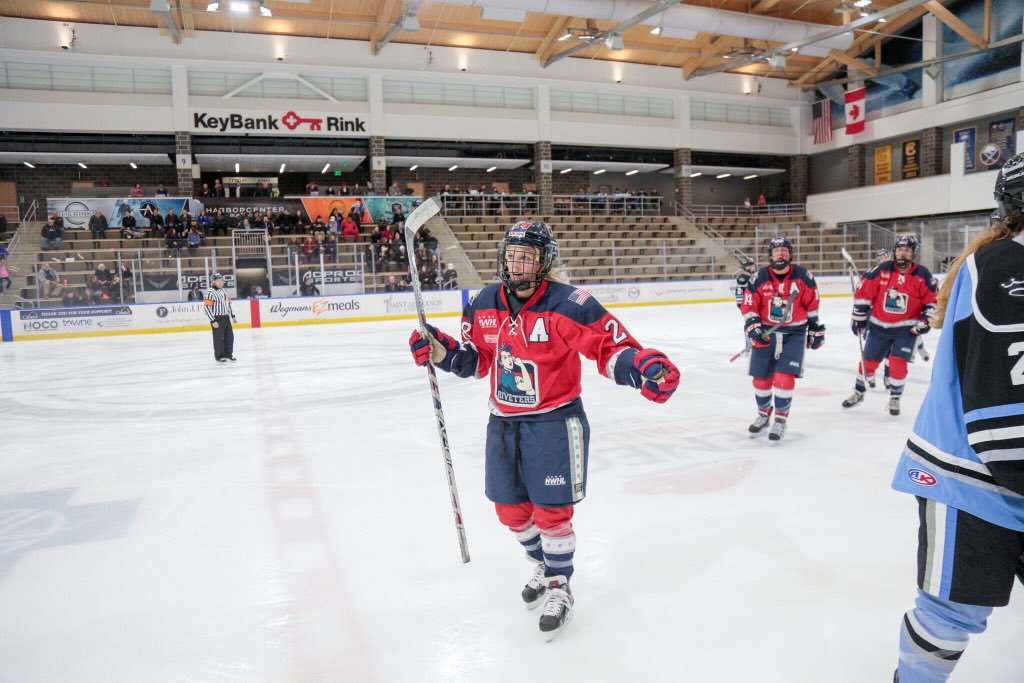 With one week of free agency down, the 2018-19 NWHL season is shaping up nicely. The first week of the league's free agent period saw five returning players sign. In addition, there were several other big pieces of news from around the league.

The Buffalo Beauts have a new general manager in Nik Fattey, who is also Vice President and Director of Hockey at HARBORCENTER, the Beauts' home rink.

Fattey's introduction to the GM role was not formally announced by the league, but came as a surprise when he was quoted in one of the team's media releases this past week.

He was previously a scout for the Buffalo Sabres for eight seasons in both amateur and pro capacities.

The Beauts have been the busiest NWHL team so far in free agency, re-signing four players for the upcoming season.

"She embodies what we look for in a player and we know she will continue to be a leader on and off the ice," Fattey said of Buie.

Elia is coming off a rookie season that saw her average more than a point-per-game, with 17 points (6-11) in 16 games.

Scamurra, who won NWHL Rookie of the Year, averaged a point-per-game in the regular season, with 14 points (7G, 7A). She was also named to the league's All-Star Game.

Chesson is entering her third NWHL season and third with the Beauts. The defender registered eight points (1G, 7A) in 16 games last season and was a key part of Buffalo's defense core.

Elsewhere, the Metropolitan Riveters added Olympian Amanda Kessel to their roster for next season. Kessel was the first Olympic player to sign in the NWHL for next season.

She returns to a Riveters team that's seen some changes over the past year, but is the first piece of a championship team that will look to build off its Isobel Cup win.

"We are coming off of one of the most exciting moments in U.S. women's hockey history with Team USA's Olympic gold medal victory and I want to keep this momentum going in the NWHL," Kessel said.

"I want the next generation of women's hockey players to see that a professional career in hockey is possible," she added.

Meanwhile, the Connecticut Whale, Boston Pride and Minnesota Whitecaps have all been quiet in free agency so far.

While the Riveters added Kessel for next season, they've also lost another big piece of their championship team: captain and long-time Riveter, Ashley Johnston.

Johnston announced her retirement in a statement to the fans earlier last. In her statement, she discusses her travels to and from Albany over the years, and details what the league has meant to her.

"I believe the NWHL offers the highest level of hockey available to female athletes. The league offers a platform for females to be valued as professional athletes. It provides a different narrative, not the one that dominates news outlets where a female athlete is identified for who they're dating or married to, for what they're wearing or what they ate for breakfast."

Johnston finishes her NWHL career with 14 career points, including four goals, in 56 games, all for the Riveters. She joins fellow Riveter Harrison Browne in retirement; Browne retired earlier this offseason.

The Riveters will face Luleå Hockey, champions of Sweden's SDHL, in a three-game "Champions Cup" series later this year.

Specific dates and times, as well as ticket and broadcast info, will be announced at a later date. The games will be held between September 26-30 at Norrbotten Arena in Sweden.

All three games of the series will be played, regardless of who wins the first two games. The teams will also take part in a community hockey clinic for youth.

Stay tuned throughout the summer for more NWHL news & notes.