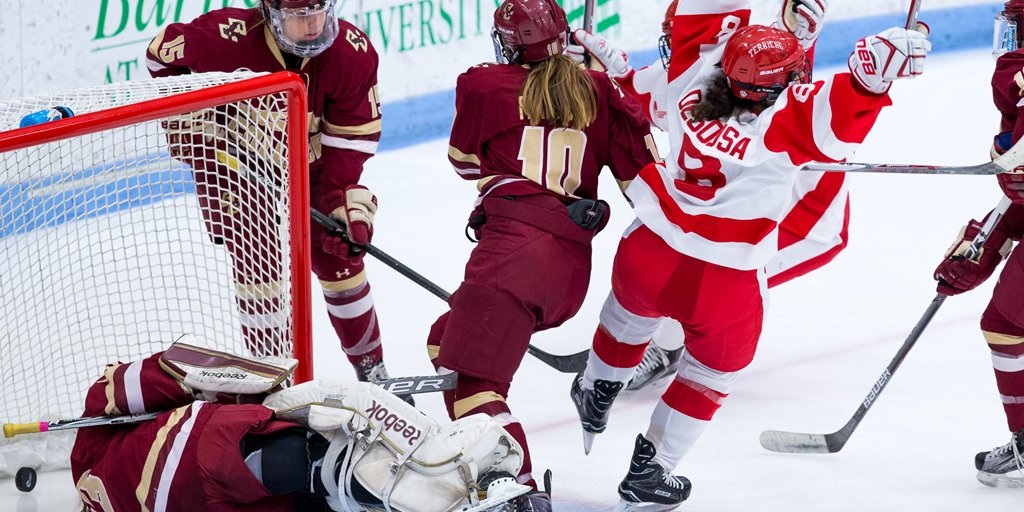 This should be one of the best series we get to watch this year, as these two teams seem incredibly evenly matched. Colgate tends to be more prolific on offense, but both are very good on defense and have great goaltending.

I'm never sure what to make of a team splitting time between two goalies, but it's working very, very well for Colgate, whose Julia Vandyk and Liz Auby are fourth and fifth in the country, respectively.

Cornell has an especially talented penalty kill and special teams could be the difference when the teams are so close together.

Shea Labbe has been the offensive leader for Colgate and Cornell is getting a ton of output from freshman Madlynne Mills and sophomore Kristin O'Neill. The young players have stepped up for the Big Red and could be a difference-maker for them this season.

These two played on Thursday night, and Clarkson took a 2-1 win. All the scoring happened within six minutes during the third period. They're clearly pretty evenly matched and Saturday's game should prove to be just as interesting and exciting.

St. Lawrence has had one of the toughest schedules of anyone over the early parts of the season -- this is their fourth against Clarkson, and they've already had two against BC as well as Colgate, Cornell, and Princeton. They've dropped to eighth in the country and will be working for the rest of the season to keep themselves there. If things continue as they are, Clarkson will earn the ECAC auto-bid and the Saints will be hoping to get an at-large to the NCAA tournament.

Clarkson's won all three of their meetings this season, though Thursday's game was the closest margin of victory.

Watch: Friday's game is available for free via ESPN3. Saturday's game should be available via free stream here.

The four top scorers in the country are playing in this game -- Caitrin Lonergan and Daryl Watts for BC, and Victoria Bach and Rebecca Leslie for BU.

Last season, these rivals split a regular-season series in November, each winning by a score of 5-3. They tied 1-1 during an early January meeting before BC took the season series with a 3-2 win in the Beanpot.

The rivalry between BC and BU is so intense that I'm not sure how much other factors really play in to it. Their relative talent the rest of the year doesn't seem to have much bearing -- this is the hardest each team will play and they're playing for pride.

BU has had a somewhat disappointing season so far, with losses to Merrimack, Maine, and RIT. They also lost 4-3 to BC earlier this year. When they win, they do it decisively -- they're averaging more than five goals per game in their six wins. Compare that to their two-goals-per-game average in their seven losses.

If they're going to pull off an upset, BU has to get a big game in net. Freshman Corinne Schroeder has 10 starts for the Terriers.

On the other end, Katie Burt won't have it much easier. Bach has 12 goals and five assists over her last five games and Leslie has five goals and 10 assists over the same stretch.

↑Boston University's Victoria Bach -- The senior has 10 goals and five assists over her past five games.

↓Wisconsin -- The Badgers' loss to Northeastern last weekend means there are no unbeaten squads left in Division I hockey.

↑Minnesota-Duluth -- The Bulldogs had a rough October, losing six straight to start the month. Since then, UMD is 7-2 to put them back above .500. They upset Colgate last weekend en route to winning Vermont's Windjammer Classic.

↓Harvard -- The struggles continue for the Crimson, who lost to Holy Cross and followed that up with an 8-1 loss to Boston College earlier this week.

↑Robert Morris -- The Colonials earned a 3-2 OT victory on Tuesday to salvage a weekend sweep with Ohio State.

↓Connecticut and Penn State -- These two are the only teams without a conference win. Penn State has four ties within the CHA -- so even winless, they aren't in last place!

↑Boston College's Caitrin Lonergan - The sophomore leads the country with 18 goals scored in 15 games. In the month of November, she tallied 11 goals in eight games. Overall, she has 38 points and has already eclipsed her rookie year output in less than half the games played.