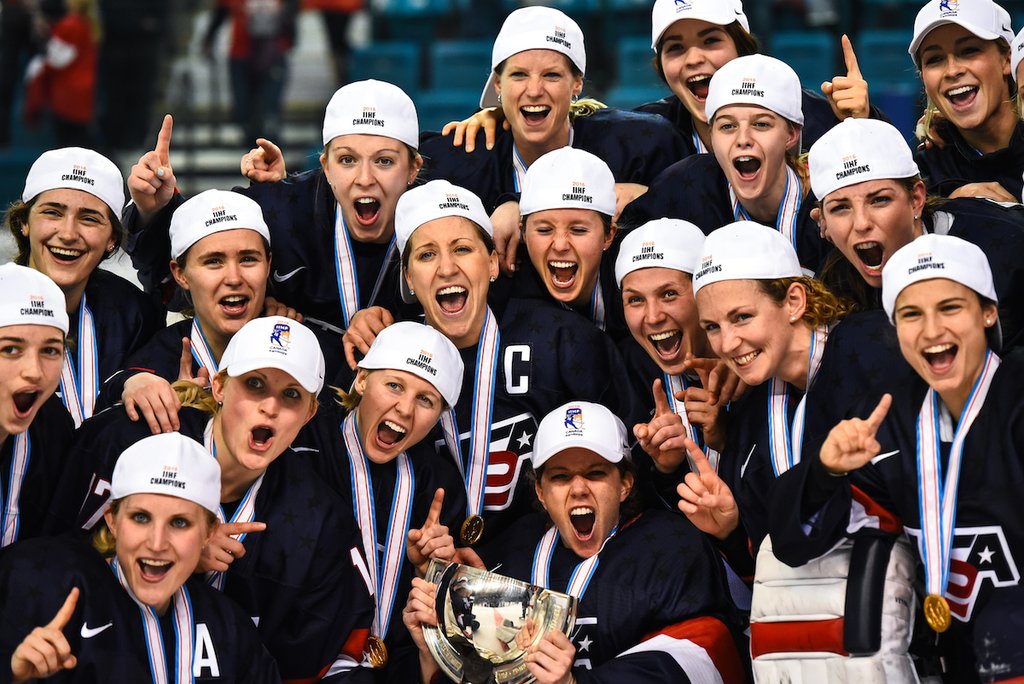 We know who we'll expect in the gold medal game this year at Worlds, and also what's at stake for both groups.

Before Team USA protested their treatment by USA Hockey and boycotted the tournament, it was fair to say that recent history made the Americans the favorites for the gold medal. But now Canada has a huge advantage -- they've been on the ice at a pre-tournament camp, cementing themselves as a team, formulating lines, and getting their legs under them, while Team USA didn't come to an agreement with USAH until three days before the tournament. Assuming that all the players immediately flew in to Plymouth on Wednesday, there's little time for Team USA to get themselves together the first puck drops. And unfortunately for the Americans, their first game is against Canada.

The lack of time for Team USA to prepare means that Canada isn't a bad bet to take the opening round game, but that's no guarantee of what will happen in the medal rounds.

There are seven women on this year's roster who did not compete in the 2016 Women's Worlds for Canada -- forwards Haley Irwin, Sarah Potomak, and Laura Stacey; defenders Erin Ambrose and Renata Fast; and goalies Shannon Szabados and Geneviève Lacasse. The Canadian roster does tend to skew older, though this roster is younger than they've gone in recent years. There are just three collegiate players on the roster, but their team's average age is just 25.26 years old.

As always, Marie-Philip Poulin is the player to watch. Aside from above average skating, puck-handling, hands and shot, what makes Poulin so incredible to watch is how easy she makes it look. Everything is effortless that you forget to remember that she's probably the most elite player you've ever watched. If you're paying attention, some of the things she does are just scary good. But if you tune out, you might miss the best of it. In a lot of ways, she's not super flashy. She just has all the tools at a level far above most everyone else.

It'll be interesting to see what they do in goal. Szabados hasn't played with them in a few years and I think we all assume she'll get the early nod, but I expect all three goalies to get a chance. Emerance Maschmeyer has had the steadiest role with the national team. Lacasse has not been with the team in a while and has likely played her way back into a roster spot with her showing in the CWHL.

Canada's two college-age forwards could be some of the most fun to watch. Both Emily Clark and Sarah Potomak were stellar during the college season and became even more so when paired with other elite forwards on their team's top lines. I expect to see both of them elevate their games to match the play of the players around them.

Though she's been invited to the last few Hockey Canada camps and tournaments, Blayre Turnbull is a newer addition to their player pool. She's made a name for herself in the CWHL and she's learned how to effectively use her size and strength up front to carve out a space.

The average age definitely jumps up on the blue line, with a ton of veteran talent holding down the Canadian defense. I like the additions of Fast and Ambrose, who are former teammates and national champions at Clarkson. They went from teammates there to teammates at Toronto. They've got great chemistry and bring a different vibe to the defensive corps.

I'll always be awed by Meaghan Mikkelson's return to the senior team. She's big on her skates, tough along the boards and a great leader in the back for Canada.

We all know that Canada is one of the best teams in the world, but as always they'll have to get through:

It's been a tumultuous couple of weeks for Team USA, but in the end, they were able to force negotiations with USA Hockey and come out with an agreement that they were happy with. While they -- like us -- are glad they're going to be taking the ice for the World Championships, they're definitely starting behind the eight-ball.

Instead of having a week on the ice with a pre-tournament camp, the players had to scramble to get to Plymouth on Wednesday. USA Hockey announced a practice and some media availability, but that's the only one formally scheduled before they have their first game on Friday. Presumably, as negotiations advanced, players had bags packed and were prepared to head out on short notice, but the whole thing is enough to make me anxious -- and I didn't even have to do it.

USA and Canada will meet on Friday, the first day of the tournament, in their first game of pool play. It gives Team USA little time to ease into things, but should also help them do whatever is necessary to get up to speed.

There are 17 players on the 2017 roster that won gold for the US in 2016. There are four new players: goalie Maddie Rooney, defender Kali Flanagan, and forwards Hannah Brandt and Kelly Pannek. They also have two players returning to the senior roster -- Amanda Kessel and Gigi Marvin.

The biggest change may come behind the bench. USAH named Robb Stauber head coach for the tournament. He led the team at the December series against Canada, but at the time it was thought the move wasn't necessarily permanent. Now it seems that Ken Klee is out and that Stauber is the one who will lead the team to Pyeongchang. The December series wasn't a great one for the Americans. It's too early to know which if any of the changes we saw can be attributed to Stauber, but we'll know fairly quickly into this tournament. In December, the Americans were dumping and chasing, and frankly I'm a bit worried that this strategy will be employed again to help with quicker shifts and getting the team up to speed. You can read my thoughts about that series here.

The long and short of it is that in that series, the US seemed to get away from all the things that they'd been successful with in the past -- and if that's the way the program is shifting, it would be a shame. They have too much talent across their front three to not be using them effectively. Kendall Coyne is wasted if she's never used on a quick break or a cross-ice pass. She can fly and forcing her to dig along the boards over and over is nothing but wasting seconds on the clock.

To some extent, that series gave teams other than Canada a blueprint for how to fluster and stifle Team USA. It took the Americans until the second game to even begin to look like they were a team and with the situation this week, they're going to be even more discombobulated than they were back then. Frankly, it's a bit worrying. If they struggle to pass and through the neutral zone like they did in December, Russia and Finland may be able to steal a goal or two, pack it in, and pull out an upset.

However, that's enough doomsday scenarios. The US roster is packed with talent and no matter what, we're going to get to watch some amazing hockey this week.

We assume we'll see Coyne, Hilary Knight, and Brianna Decker on the top line together, as they've been for quite some time. When they're clicking, they're a unique package of talent that all elevate one another. There's nothing better than a long, tape-to-tape pass from Knight that hits Coyne in stride and breaks her free into the zone.

When Amanda Kessel played in December, she hadn't had a lot of time back on the ice. She seemed to settle in with the Riveters and find a comfort level just as the season was winding down. She was one of the players who was most affected by the sloppy play in the last series. She's most effective when she's allowed to be creative with the puck. She also has incredible vision on the ice, and she needs to be on a line with players that can anticipate her and keep up.

It's good to see Brandt getting an opportunity. She's a sturdy, solid player up front and shows shades of the same physicality and nose for the net that Knight has. Having another line with that kind of presence will only be good things for the US.

Lee Stecklein has been one of the most solid blueliners for years, and she's just 22. She brings height to the back and is especially good at patrolling the front of the net and clearly out rebounds and loose pucks. She, Bozek, and Keller are all big defenders that can help give the goalies a bit of breathing room.

At this point, it appears that Alex Rigsby is the number one goalie, while Nicole Hensley has carved out a spot for herself on the roster. The newcomer is Maddie Rooney, who plays at the University of Minnesota-Duluth. She had an absolutely stellar final few weeks of the season, stopping 112 shots in two days at the WCHA tournament against Minnesota and Wisconsin and helping backstop the Bulldogs to the NCAA tournament. She has great fitness, moves well, and doesn't seem to get flustered.

It's hard to know what to expect from Team USA, considering all of the instability that they've been dealing with, but they have such a collection of generational talent that it would be hard to count them out of another gold-medal match against Canada.