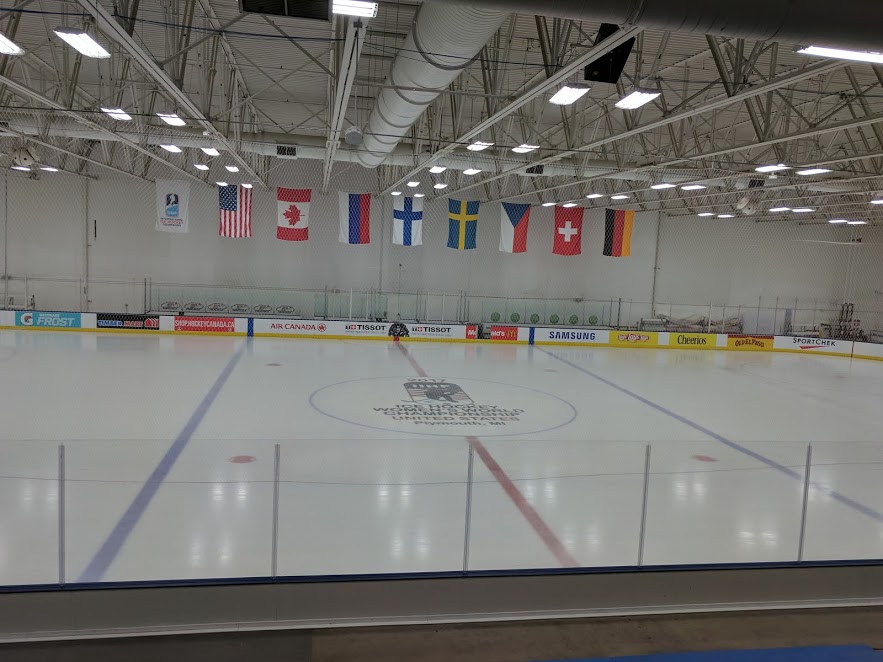 Finland goaltender Noora Räty raised concerns and complaints about the goals and pegs used on the secondary rink on Friday. She compared the pegs used to those one might see in a beer league and had some strong post-game language about the situation.

I tried to push off the post, the net is off and I'm just stuck there. I weigh about 150 pounds. It should not be doing that with my weight. It's absolutely a joke. It can't happen at this level.


It ruins my day when I have to deal with nets like that. That should not be happening at this level. I'm 100% sure that last goal would not have happened if we had real nets. But that's life.

Räty was worked up after Russia scored the game-winning goal with less than a minute remaining in the contest. Räty said she was unable to play her game because of the flimsy anchoring of the goals.

USAH Director of Communications Dave Fischer said that the IIHF approved the playing conditions. It's unclear if any actual violations occurred, but Räty seems to be valid in her statements that these kinds of conditions would not be tolerated at a men's tournament. The use of the break pins -- and incredibly dull ones at that -- is not standard at any competitive level. That the tournament is already playing games on two different-sized ice surfaces is already a question for some. The use of the break pins feels like just another small slight to the women that the men would never have to suffer.

Someone on Twitter called the various slights by USAH "microaggressions" and it feels appropriate. On their own, none of them are terrible, but there's never just one -- and they pile up in a way the women have to suffer through but the men do not.

With USA Hockey refusing to comment and IIHF reps unavailable, it's unclear to what extent Noora Räty's complaints about the goals and their pegs during her first-day game against Russia shone a light on an issue, or merely pointed out another indignity.

The Americans lived up to their own hype and gave their cadre of new fans off the ice a reason to fall in love with them on the ice.

After their morning practice, head coach Robb Stauber talked about pushing the pace and being aggressive, something that his players showed on the ice later that evening. As a former goalie and goaltending coach, Stauber brings a wider vision -- literally -- of the ice. He's trying to get his players to think and see that way, as well. But it's not necessarily something that's easy to teach.

Megan Bozek said that the wider vision of the ice really plays to the team's strengths.

"We're using the whole length and width of the ice, which is helpful for us because we're a fast team. If we can use our speed against every other team, I think it'll put us in a good position," she said.

Nicole Hensley got the start in goal and Stauber implied that it was a strategic move to see how she'd handle the pressure. Though he wouldn't explicitly state it, it seemed like Stauber was looking to get a wider read and evaluation on Hensley, who's mostly seen time against less-talented opponents and who had just one WWC start prior to Friday.

Hensley was helped tremendously by her defense -- the Canadians managed just 18 shots on goal.

The Americans kept pressure on Canada all night and forced Shannon Szabados, who was playing in her first WWC since 2013, to make more than a few spectacular saves.

Since reaching a deal with USA Hockey on Wednesday, things have sort of happened in fast-forward for the players. They immediately transferred into "game mode." Brianna Decker and Monique Lamoureux-Morando admitted they didn't allow themselves a moment to soak it all in until the team was saluting the crowd after the US national anthem was played.

The crowd was fairly evenly split between US and Canada fans, but as the Americans gained momentum and control of the game, the crowd got even louder.

I spent some time asking fans of both countries questions about when they bought their tickets and how the boycott affected their plans. In a small crowd like that, you always have to ask if they people you're talking to are related to one of the players. Three women I stopped to ask said they weren't relatives -- but that they'd worked as lawyers for the women in their fight with USAH.

They obviously couldn't go on record, but they themselves were inspiring to talk to and the conviction, fight, and passion of the players had converted these ladies into new fans who couldn't wait to support the players on the ice after helping them succeed off it.

The US relied on their mostly unchanged roster to breed familiarity and help carry the team without much practice. Their lines were familiar and paired players who had experience with one another. Playing with someone you're so comfortable with is almost instinctual and plays into Stauber's desire for the team to be able to see the full sheet of ice and anticipate how plays develop.

"The chemistry on our team is great. You know where people are going to be on the ice, when to expect the puck, when you know the back check is coming. It just speaks to the power of the team," said Bozek.

On the other side of the ice, the Canadians had a pre-tournament camp, but couldn't seem to find the same type of chemistry. Now is definitely the time to try different pairings and lines in preparation for the Olympics, but it proved costly against the Americans Friday night.

Kacey Bellamy was asked about the team's unity and she responded by praising the team leadership in being able to keep the team focused, prepared, unified, and cohesive in their fight.

"Meghan Duggan is the best captain I've ever played for," she said

The Czech Republic might have been the biggest surprise of day one of this year's tournament. They were eliminated from Olympic qualifications by this very Swiss team less than two months ago by a score of 4-1, but you'd never know it.

I spent the morning on Canadian radio telling various stations that I thought the Czech team might be the most fun to watch this tournament, because they had so much potential and nothing to lose. I double down on that statement, but have to adjust my thoughts that the Czech team might be a few years out from truly competing. They held their own with the Swiss and kept them on their toes -- and forced the Swiss to win in a shootout.

Though the Swiss have ambitions in this tournament, Swiss forward Alina Muller pointed out that the pressure was on the Czechs in this match to prove themselves.

"It was probably easier for us to play them today because we could relax knowing we had beaten them," Muller said. "We were able to relax because we've reached our goal of making the Olympics. But the Czechs played well and checked us closely."

The Czechs scored their goal off a miscue from Swiss goalie Florence Schelling. She's an active goaltender and her team is used to her feeding them long passes from the defensive zone. But a misplaced pass was intercepted by Tereza Vanišová and put in the goal.

"It was a stupid mistake, but as soon as that puck went in, I knew it was all about standing up and forgetting about it and that's what the team did, as well. We came out strong in the third period. We knew we could turn this game around," said Schelling.

The mistake did linger with her a bit longer than she'd have liked, because she found herself timid about leaving her crease. It took a bit for her to find her confidence, but she said she knew that her teammates expected her to play out of her net and if she changed, the goal would have affected a lot more than the scoreboard.

Team captain Lara Stalder hopes to see her team play less nervous and more focused on the second day of the tournament.

"It was a battle all game, with ups and downs, and we're glad we were on top of it and got the two points in the end because the group is really close. It was huge for us. We started a little bit nervous. We didn't keep it simple. We tried too hard. We just need to go back to the simple things. It's not a one player game. It needs a whole team. We really stuck together today. The whole team has to factor in. We all worked hard and for sure can improve things," she said.

Tereza Vanišová is still in her freshman year at Maine, but the potential that she has is clear -- not just for the Black Bears, but for the national team as well. She seemed to be a part of every big play for the Czechs, and she had Schelling read all the way on the pass she intercepted for the goal. She's a young player and she's well worth keeping an eye on.

Beyond the controversy raised by Räty, there was a stellar game between the Finns and Russia. The Russians scored first and forced the Finns to play catch up.

43-year-old Riikka Välilä was the lone goal scorer for Finland -- their most veteran player is still going strong.

Finland has to stay out of the penalty box if they're going to be successful this tournament. With seven different penalties, they forced their defense to do way too much. The Russians outshot Finland 27-18.