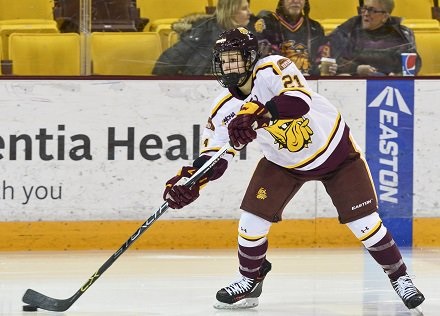 It’s been an interesting and chaotic opening few weeks of the women’s college hockey season. At the end of week three, of the teams that have opened their seasons, just two teams have an unblemished record –- Quinnipiac and Colgate. Boston College, Minnesota, Wisconsin, North Dakota and Clarkson all stumbled against unranked teams. The top-10 poll, usually fairly unchanged in the early weeks of the season, already features three teams that were unranked to start the year.

The upcoming week features Wisconsin at Clarkson and Boston University at Northeastern, as well as Minnesota-Duluth at Minnesota, Ohio State at Bemidji State and our first look at a few of the Ivy League schools, as they start with exhibitions.

We’ll have a “What to Watch” later today, but in the meantime here are some highlights of the first few weeks: