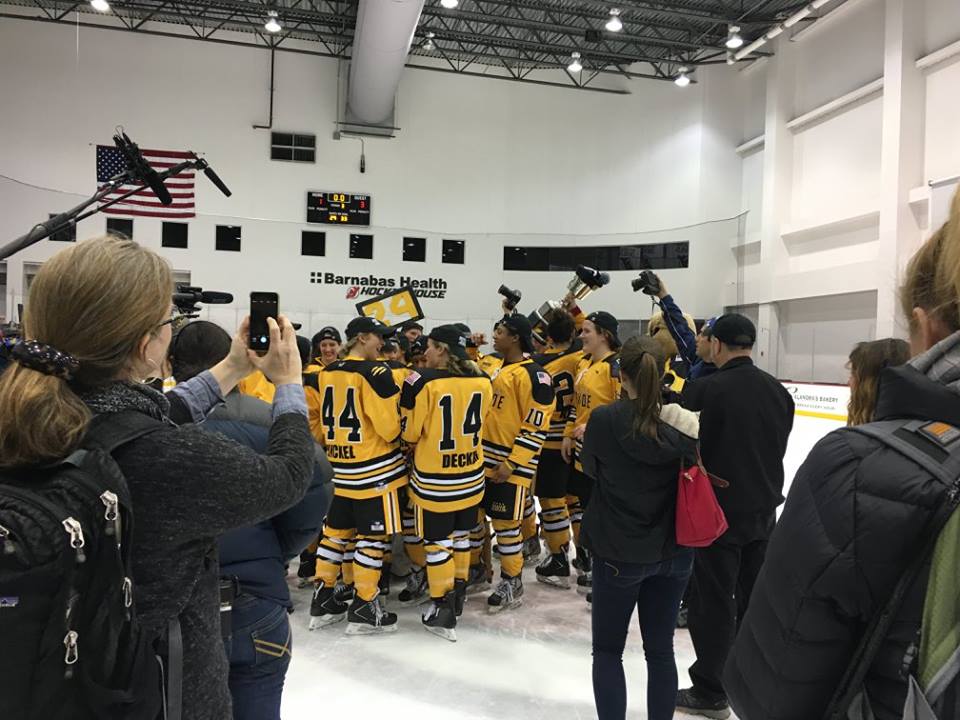 When the NWHL's inaugural season began, the Boston Pride were already the favorites for many. After all, the team was filled with US National Team players and was set up to be a strong, stacked roster.

With names like Hilary Knight, Brianna Decker and Gigi Marvin among those on the Pride's roster, pretty much everyone knew heading into the season that the Pride would be "the" team to beat.

In the end, the Pride lost only four games over the course of the season, which included 18 regular season games, a pair of playoff games, and a pair of Isobel Cup Final games. They won the first-ever Isobel Cup, ousting the Buffalo Beauts, and went on to sweep the NWHL's end-of-season awards.

Yeah, I guess you could say they had a pretty good season.

The Pride were hot from the start of the season, winning their first three games and outscoring their opponents 16-5.

But then, all of a sudden, they got cold. After winning the first three, they'd lose the next three, each by a one-goal margin. Still, they recovered quickly. Those would be their only regulation losses throughout the season, and they'd go on to win 11 of their next 12 games.

The Pride's inaugural season also saw them participate in the Women's Outdoor Classic at Gillette Stadium, facing the CWHL's Les Canadiennes in a 1-1 tie. For further reading on that game -- and particularly the issues that surrounded its execution -- check out Jashvina's piece.

In the outdoor game, Pride forward Denna Laing unfortunately suffered a severe spinal cord injury. She's been working hard to recover from it ever since. Denna was a valuable member of the team, and her injury at the game raised questions about player safety and support for NWHLers following significant injuries.

Laing would go on to win the Perseverance Award, selected via write-in vote by the NWHL Writers' Group, and the NWHL Foundation Award, whose winner was determined by fan vote after the ballot was decided by the NWHL Players' Association.

Later in January, eleven members of the Pride were also selected to play in the NWHL's first-ever All-Star Game, which was an exciting, energetic display of pure talent and great personality from across the league.

The Pride finished the regular season at the top of the league, with an overall record of 14-3-0-1 and 29 of a possible 36 points. They had a league-best plus-36 goal differential, and had won seven in a row heading into the playoffs.

Heading into the playoffs, the Pride were faced with the New York Riveters, and Boston was clearly the favorite to win. The Riveters had just 10 points in the regular season, and a minus-36 goal differential to Boston's plus-36.

As expected, the Pride had little trouble ousting the Riveters in two games, including a 6-0 shutout and a closer 7-4 win. This put Boston into the Isobel Cup Final, where they'd face the Beauts.

Though the Pride were still easily the favorite, Buffalo didn't make it easy for them. The first game was won by Boston in overtime on a Knight penalty shot, a close 4-3 victory. The second game was more of an offensive breakaway, with Boston providing much of the offensive effort until Buffalo scored late in a last-ditch effort to ruin Ott's shutout.

With those two wins, the Pride captured the Isobel Cup, the first team in NWHL history to complete the feat.

The energy on the ice post-game was nearly palpable. It said, "We did it. We won the regular season, we won this, we did it," a sense of accomplishment and -- excuse the unintentional pun -- pride.

"We worked hard all season, and we deserved this win," said Boston Pride netminder Brittany Ott after the team won the Isobel Cup.

Boston followed up its incredibly successful season by sweeping the league's awards. Some, of course, were statistically-based, while others were voted on by players, members of the NWHL Writers' Group and the fans. Either way, in the end, all of them went to the Pride, including the aforementioned pair to Denna Laing.

Looking to the future, down the pipeline are five draft picks for the Pride, including both goaltender Emerance Maschmeyer and forward Miye D'Oench of Harvard; forwards Shannon MacAulay (Clarkson) and Kendall Coyne (Northeastern); and defender Lexi Bender of Boston College. Coyne recently won the Patty Kazmaier Award. With most of their draft picks already established in the city of Boston, the Pride may have an advantage in signing those picks.

While this season was obviously generally a great one for Boston, there are still questions going forward. How do they continue this success? How will free agency affect their stock, and how will the talent potentially be more spread out across the league in years to come? There's an exciting offseason ahead for the NWHL and their first league champions.