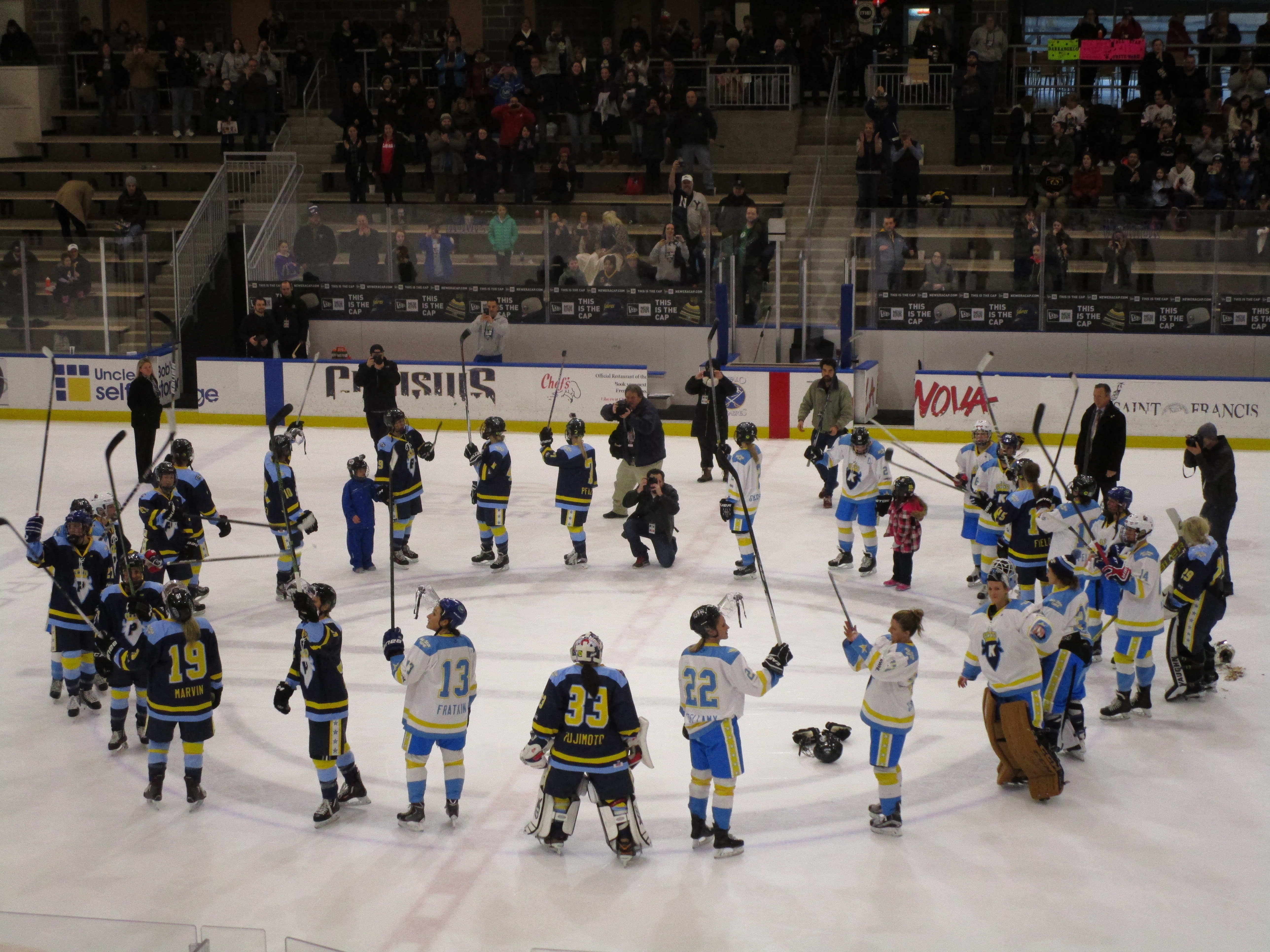 "It's been an exciting year for women's hockey."

That's certainly one way to sum up the past 365 days, in the words of NWHL commissioner Dani Rylan.

The league that didn't even exist on January 1, 2015 hosted its first-ever All-Star Weekend in Buffalo in January 2016 -- a pretty amazing turnover for a fairly newly-begun venture.

The NWHL's first All-Star Weekend saw fans attend a Friday-night dinner with players, enjoy a "Skate with the Stars" event on Saturday evening, and watch some incredibly talented players come together for the game itself on Sunday.

Sunday's events were split into two sections: first a skills competition, which was followed by two 20-minute periods of game action.

Overall, the four events left Team Pfalzer with a four-point lead heading into the game. They capitalized on that advantage, winning 9-1 in the end.

The game portion itself was played 4-on-4, which Rylan said was intended to keep things moving fast and create a fun atmosphere.

The players seemed to enjoy the format.

"It opened up a lot of ice and created a lot of scoring opportunities...it put people in uncomfortable situations when we’re not used to playing 4-on-4," said Hilary Knight.

Emily Pfalzer added that the format helped to show how talented the players are by giving them more space.

Overall, the whole weekend was really about the fans.

The Skate with the Stars event offered fans a chance to interact with the players on another level. Though it was a high-priced item, the opportunity would have been priceless. From little kids being carried around the ice by Blake Bolden, to Jordan Brickner pulling the kids by her stick, to autographs and players dancing at center ice -- priceless and entertaining, to say the least.

The Skills Competition was filled to the brim with entertaining moments, from the chicken mascot head worn by Kaleigh Fratkin in her breakaway attempt, to the 1970s-sitcom style police hat and sunglasses worn by goaltender Jaimie Leonoff.

How about Amanda Pelkey's trick shot of being carried onto the ice in an equipment bag, only for her captain Knight to unzip her before she took her shot?

"We just wanted to make sure the fans were having fun, that’s what it was all about." - Knight

Or the number of fantastic goal celebrations that came for Team Pfalzer? From the spectacular "grenade" celebration, to the football touchdown with a glove... they were all incredibly entertaining for all in attendance.

And how can I forget to mention the goalie race, which saw Brianne McLaughlin and Brittany Ott face off to do a lap around an on-ice obstacle course? Knight herself taking an on-ice selfie with fans in the crowd, or Zoe Hickel trying to shoot tape -- not a puck -- on McLaughlin in the breakaway challenge?

Both teams also partook in post-game autograph sessions, with fans lining the upper concourse of the First Niagara Rink at HARBORCENTER, eagerly awaiting their chance to meet the All-Stars. The entire event was a mutually beneficial experience for both the fans and players.

"Whenever you can interact wit your fanbase, it’s a lot of fun and really puts things in perspective. Sometimes you forget that you’re not only an Olympian, one time you’re a little girl trying to do the things we’re doing now, so it’s something special whenever we can interact with people." - Knight

The weekend also offered players a chance to catch up off-ice.

"We don’t really get to hang out with each other on a regular basis, so just to be in the same place with everyone has been super fun. Hopefully we all put on a good show for the fans," said Connecticut Whale forward Kelli Stack.

Overall, it's important to keep in mind that the NWHL is still in its first year of operation, and that this was the league's first-ever All-Star Weekend. There's always room for growth and improvement in the years to come.

The laid-back atmosphere allowed the players and fans to have fun and enjoy themselves, and the importance of both of those things can't be overstated. In the end, it certainly seemed like the 1,208 fans in attendance enjoyed themselves -- and that's what matters, first and foremost, coming out of the weekend.

"We wanted to give the fans a great game and really show our skill, promote this league, and show how amazing this league is." - Pfalzer

Now, it's time for the NWHL to get back to business as usual. The Buffalo Beauts will host the New York Riveters on January 31, while the Boston Pride visit the Connecticut Whale that evening.