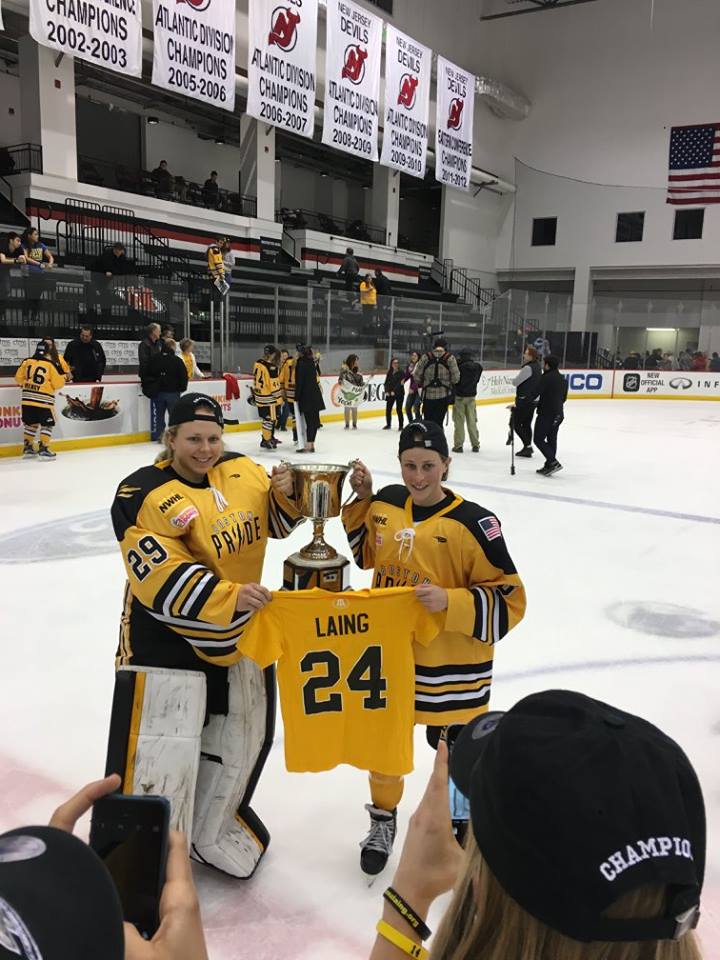 The Boston Pride captured the first-ever Isobel Cup as the champions of the NWHL's first season. A week later, the team captured even more awards, sweeping the league's year-end awards. The league announced the awards via social media on March 20.

At first glance, it's a little hard to swallow the fact that although there are four teams in the NWHL, a single team was able to sweep all of the awards. On the most basic level, it raises some concerns about parity across the league -- an issue that's already been discussed and is reflected by things like the scoring differentials throughout the league. For instance, Boston, a team loaded with US national team players, scored 75 goals this season. Compare that to the NY Riveters, who scored just 40.

Yes, Boston was the best team -- but does that necessarily mean the Pride deserved all the awards? For those who aren't aware, here are the awards the NWHL handed out:

Those two awards were determined solely by statistics/standings, so we can't really take those two into consideration when talking about parity, but let's look at the rest of the awards...

This was awarded to "the defenseman who most excels at her position." The nominees were selected by the league, with the final winner being voted on by members of the NWHL Writers' Group. Six players were nominated: two each from Boston (Gigi Marvin, Kacey Bellamy) and Buffalo (Emily Pfalzer, Megan Bozek), and one each from Connecticut (Kaleigh Fratkin) and New York (Kiira Dosdall). The award went to Gigi Marvin.

In all honesty, I think this award was hard to vote on. Defensive stats aren't easy to come by yet for the NWHL, and without watching every minute that each of these players skated during the season, it's hard to judge them on their defensive abilities. It's easy to say "Well, so-and-so scored nine goals this season...," but in the end, this award is based on defensive skills, and we need better and more advanced stats to help back that up.

The "best goaltender" award was given to the goaltender who most excels at her position. Again, the nominees were selected by the league with the final winner voted on by the Writers' Group. The Riveters had two representatives, with both Nana Fujimoto and Jenny Scrivens on the ballot. Boston had Brittany Ott, while Buffalo had Brianne McLaughlin, and Connecticut's Jaimie Leonoff rounded out the ballot. Brittany Ott won the award.

The Writers' Group also voted on the perseverance award via a write-in vote. The description was as follows: "awarded to the player who most exemplifies the qualities of perseverance, sportsmanship, and dedication to her sport." It's a pretty vague description, and with literally the entire league worth of players to choose from, it's hard to pick just one.

In the end, Denna Laing won the award. Buffalo's Kelley Steadman and Meggan Duggan, as well as Connecticut's Anya Battaglino, were the other top three write-ins, as announced by the league.

Perhaps clarifying the description a little more, or wording it differently, would have made a difference. There are so many ways a player can show perseverance, sportsmanship, and dedication, and the current criteria leave it wide open for our interpretation.

For instance, while I knew that many would vote for Laing based on the word "perseverance" alone, I went a different route and voted for Steadman. Why? She worked hard all season long and played incredibly well -- all as a practice player and while not being paid. If that doesn't show dedication and sportsmanship, I'm not sure what does.

Laing's dedication and positivity while rehabbing from a severe spinal cord injury sustained in the Outdoor Women's Classic certainly show perseverance; however, many have levied criticism at the optics of Laing's story being used promotionally by the league with regard to how it frames disability and the agency of those living with physical limitations.

Denna Laing also won the NWHL Foundation Award, given to the player most actively applying the core values of hockey to her community, as well as growing and improving hockey culture. The NWHLPA chose the nominees, which included Laing, Buffalo's Tatiana Rafter, Connecticut's Battaglino, and NY's Scrivens. The winner was determined by a fan vote.

Finally, Brianna Decker was awarded the league's MVP, as chosen by the NWHLPA via a write-in vote. Steadman, Pfalzer and Knight were the runners-up. With that, the Pride swept all the awards.

Determining the validity of these awards is a difficult discussion to have. In one respect, we can talk about parity throughout the league, as well as the potentially troublesome implications of Laing receiving two awards while often seemingly being raised up as the "face" of the league.

However, we also need to consider that these awards were selected by different groups of people, independent of one another. The NWHL Writers' Group is responsible for some; the players for others; and the fans for others still. How can we argue with who the players select as nominees for the Foundation Award, or who they pick as MVP? They obviously have a unique perspective on things that we, as fans or writers, can't see. The fans have another perspective, while the writers have yet another.

It's hard to try and find a solution to this dilemma when all of the awards were voted on by different groups. It's not like the league could look at the results and say "Whoa, all the awards are going to the Pride right now -- we need to fix that."

Once all is said and done, it is what it is; but the league can take small steps to make it easier, such as working on the "fancy stats," especially for defense, and clarifying the award descriptions. Having talent spread more evenly throughout the league -- that lovely thing called parity -- would also help.

It's also important to consider how media coverage of the NWHL plays in here. Boston has regularly received the most consistent media coverage of the four teams, and maybe that plays into the presentation of this year's awards. Media and generalist fans alike are more familiar with the Pride's individual players, and perhaps that makes them more likely to vote for those players. Ensuring more consistent, well-done media coverage -- both mainstream and not -- of ALL four teams can help in many ways as the league moves forward.