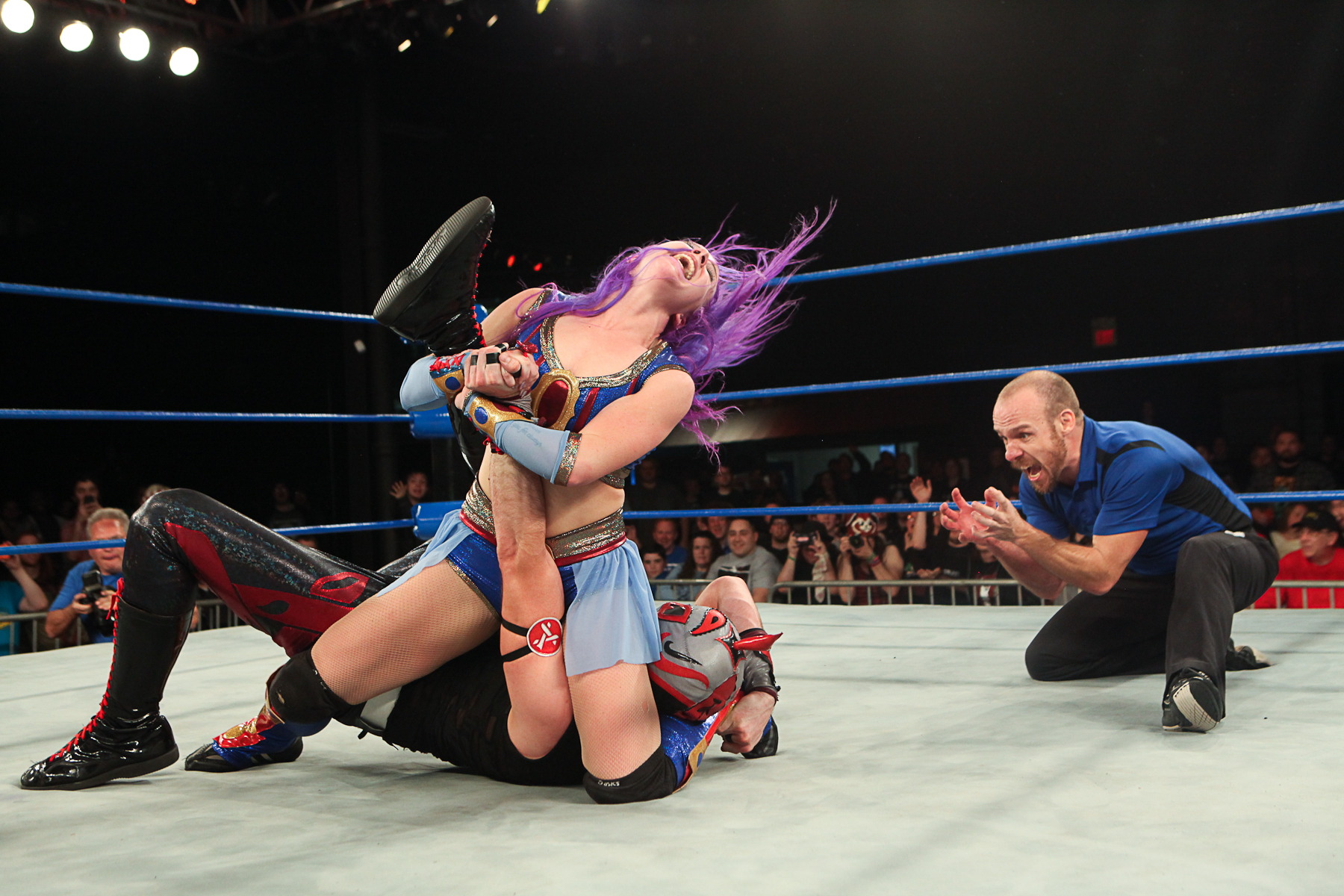 Princess KimberLee does sometimes, even though when she was growing up in Seattle, she wasn't allowed to watch professional wrestling on TV. Now, Princess KimberLee is the Royal Regent of CHIKARA, the Pennsylvania-based league's Grand Champion -- and the first woman ever to win that title in a mixed-gender wrestling event.

KimberLee's background is in dance, and she was introduced to independent professional wrestling by newfound friends on the East Coast. She started training with wrestler Drew Gulak while she was still a student at Philadelphia's University of the Arts.

"The first thing you learn how to do is how to fall," Princess KimberLee says in a phone interview with Victory Press, recalling her first days of training. "And I remember being more sore than I've ever been in my entire life. Like I couldn't lift my neck after the first day I trained, because you inevitably smash your head into the mat a hundred times when you first start. Drew never let me do anything less than the boys. I was always expected to do the same drills as them, just as well as them. I was the only girl who was there when I started training. And he was like, it doesn't matter. You should be able to do everything that they're gonna do." KimberLee said that has helped her in the long run and prepared her for a career in mixed-gender events.

CHIKARA itself is a special environment because of its inclusiveness and audience participation. Princess KimberLee spoke to the limitations that professional wrestling has faced in the past by trying to make everything confrontational and "uncensored," such as during the WWE's Attitude Era. It limits your audience and excludes many children, she says, whose parents don't want them to see an inappropriate show.

Based on the variety of subject matter in CHIKARA shows and the diversity in the audience, it seems that they've found a winning formula. Many CHIKARA characters are based on puns and broad stereotypes, which is typical in wrestling, but they also venture into the utterly surreal and dreamlike. For example, KimberLee's tag team squad this past season consisted of the Princess herself; a masked character named Jervis Cottonbelly, who literally has a mass of cotton fur on the stomach of his costume; and two excitable characters with ice cream cones on their masks, who are known as Ice Cream Jr. and El Hijo del Ice Cream. Without negativity in the show, there are no limits to what you can do with a character. And everyone gets involved.

"CHIKARA is something special in its own way too, because we try to involve the audience in everything we do. Every time I have a little girl watch my crown when I wrestle, and it's little moments like that that make a difference," KimberLee says. "And all of us try to do that. We try to run out in the crowd. I've shoved people out of their seats and sat in their seats. Little things like that, people feel like they're really a part of it, and that's one thing that CHIKARA nails like 100% of the time."

The storyline for the Princess' ascent to the championship was not a fairy tale, but the story of a woman challenging the system to take what was hers. In a previous team event in CHIKARA's Top Banana finale on December 5, KimberLee won "Golden Opportunity" coins with her team Crown & Court, allowing her to come back into the ring and challenge any winner. She cashed them in immediately, coming in against an exhausted foe, Hallowicked, who had just taken the championship belt in defense of his title. The matchup was tense, and the challenger seemed down and out on more than a few occasions. But chants of "Let's Go Princess!" rang out from the crowd. Hallowicked played up his disbelief at having to challenge his title so soon. The Princess was finally able to pin Hallowicked; he was forced to tap out. And so, her reign began.

"I remember I was pacing in front of the curtain before I was going to the ring, just completely nervous," KimberLee says of the moments before she entered the ring. "And, even though it was three minutes, it felt like I was in the ring for hours. It was -- I can't even fully describe how it was. It was such an amazing experience. And I don't even know if I even realized what was happening until it happened. Hearing the fans cheer, and there were some people who just started crying in the front row...It was overwhelming and humbling. I never thought I would be able to affect people that way."

Her mother (who once forbade watching pro wrestling) has become one of KimberLee's biggest supporters, and is a huge fan of what CHIKARA does. "She's actually been to the show with me now and seen me wrestle live, and she supports me in everything I do which is awesome," KimberLee says.

A league as diverse and strange as CHIKARA easily draws some critics for what the Princess and others are trying to bring to the sport. "I still will get messages from people saying that it's completely unbelievable and we're 'ruining wrestling' and all types of things. But with change, you're always going to have people who don't support it -- and there's always going to be people who don't want change. I have to go against the grain to make change, and I'm not the only woman who's doing it." KimberLee specifically mentions Heidi Lovelace, who became the first female Young Lions Cup winner -- a title in CHIKARA that's specifically for wrestlers aged 25 and under.

Young girls are a huge and potentially untapped market for wrestling that CHIKARA seems to have a strong presence with -- meaning that there may be even more female Young Lions Cup winners and Grand Champions in the future. "I have a lot of little girl fans, which is my favorite," KimberLee says. "Being that I wrestle with the men and I hold a title that's never been held by a woman before in a male-dominated company, I get to show them that they get to do whatever they want, and they shouldn't be like 'oh, I'm a girl, I can't play that sport', or 'I can't do this,' or anything -- like there's no limit. And even with older women, I get to show them that too. All I've ever wanted to do is make some sort of a difference and show people that anything is possible. And, finally getting to realize that dream in some way is pretty awesome."

Princess KimberLee's Top 5 moves, including her favorite finisher, the Alligator Clutch (you can't get out!):

CHIKARA's next event is on Saturday, January 30 at The Wrestle Factory, 4711 Wingate Street in Philadelphia, PA. Learn more about CHIKARA at chikarapro.com and follow Princess KimberLee on Twitter at @kimber_lee90.