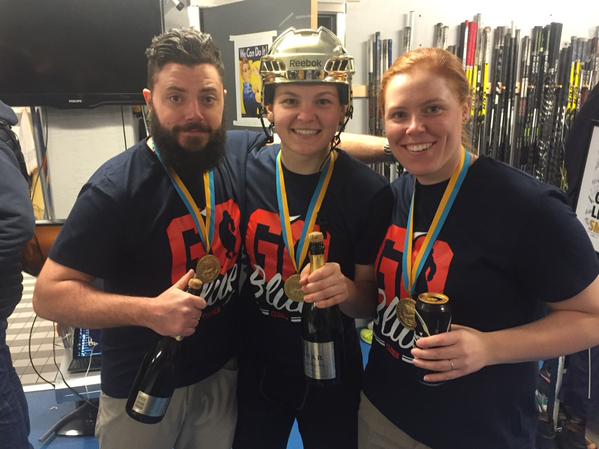 When Jenn Wakefield was little, she loved skiing more than she loved skating. But her passion for hockey grew, and her love of ski shoes sent her to snowboarding. But the Olympic hockey player doesn’t snowboard much anymore; it’s a hobby reserved for every four years, after the Olympics have ended.

“I only snowboard right after the Olympics, just because it didn’t matter if I got injured,” Wakefield said. “So now I only snowboard every four years, coming off of an Olympic year or something.”

In 2014, Wakefield had just won a gold medal with Team Canada at the Sochi Olympics. The forward, who played several games in the CWHL during 2012-13, had two options -- return to Toronto for the playoffs, or skate somewhere else.

She also wanted to snowboard.

“I wanted to try something different and I really wanted to do a lot of snowboarding. I thought it’d be kind of cool to go over somewhere in Europe where I can play hockey and snowboard a little bit,” Wakefield said.

Wakefield left Canada and joined the Riksserien -- the top women’s league in Sweden -- and spent her first season in Pitea.

The Pickering, Ontario, native is now in her second full season in Sweden. Originally Wakefield was asked to play for a Division II men’s league team, Boras HC. But visa complications limited Wakefield to six games, sending Wakefield back to play with Linköping of the Riksserien. She has 34 points in 11 games.

When Wakefield first joined the Riksserien, a culture change and language barrier affected her on the ice as well.

“Even on ice, they call for a pass or want you to shoot and you don’t know the terminologies yet in Swedish,” Wakefield said. “You’re reading off players rather than communication on the ice.”

Wakefield enjoyed playing in Sweden and wanted to skate there for more than a month. For the 2014-15 season, Wakefield was also approached by a Division III men’s team in Sweden -- which gave her a to play both men’s and women’s hockey.

“You don’t really have that opportunity in Canada or the US, so I couldn’t not try something different,” Wakefield said.

Wakefield, on a visa for women’s hockey, needed to find a men’s team that was close to a Riksserien team. She settled on Linköping.

“It was just a cool opportunity to do something different,” Wakefield said. “I don’t really believe one’s better than the other -- I think it’s just a different game and it was just a new opportunity.”

She split the season between Linköping in the Riksserien and IK Guts of Division 3, a Swedish men’s league. With Linköping, Wakefield netted 18 goals and 22 points in 15 games, She added five goals and 13 points with 15 games with IK Guts.

“It was tough because just going into the corners is a lot different,” Wakefield said. “I find the hitting a bit easier just because you have that advantage to use your body, whereas in girls' hockey, you have to take more of an angle, and have, I guess, better footwork to check someone.

“I definitely find it hard bouncing back and forth just because the rules are different.”

Wakefield, who said she was the only full-time woman in the league, said women playing in the men’s league in Sweden is uncommon.

“The guys on my team were awesome. They were super supportive and they realized I was training to make the women’s Canadian National Team,” Wakefield said. “I think they definitely helped me out and really helped me reach my goal for making [the World Championships in Malmö, Sweden].

“You get different perspectives around the league. I mean, there are some guys that didn’t think a girl should be playing in the league -- which, I mean, they’re totally entitled to their position -- and then other guys thought it was great, too.”

While playing for the IK Guts, Wakefield was the only non-native, and a part of a handful of foreigners with Linköping.

Sweden marked the third country that Wakefield has played in. After growing up in Canada, the forward joined New Hampshire in Hockey East, where she was a top-10 finalist for the Patty Kazmaier Award. After two seasons at UNH, Wakefield transferred to Boston University. She helped BU to its first National Championship appearance in the 2010-11 season, the same year she won the Four Nations Cup with Team Canada.

“Going to school for four years in the US really taught me a lot about branching out and getting out of your comfort zone and growing up, living away from home, and finding your own identity,” Wakefield said. “That’s one of the big reasons why I wanted to go to another country. Even if the opportunity never came in Sweden, I think I would’ve still gone abroad, more just to grow as a person and you know find your own identity.

“I feel like after college, it’s like there’s that gap -- what are you supposed to do? I still want to play for the Olympic team, but do I just stay in Toronto or do I try and develop more areas? And again it’s not necessarily great for everyone but I think just the way I’m wired, I think it was best for me to travel.”

Now playing in Sweden, Wakefield hasn’t been able to travel to many other countries. But the forward has visited a few different towns through playing with Riksserien.

“We play all over, so it’s like 10 towns and they’re spread between like 20 hours apart, so you get to see a lot with that.” Wakefield said. “There’s a few teams in Stockholm and [on] some days off, I’ve been able to go like to Copenhagen and Denmark. There’s no team in Gothenburg, but I’ve been able to go there with a few friends and even some friends that aren’t on the hockey team.”

“I go in and volunteer for an hour and an hour and half just to go over skill development and run drills,” Wakefield said.

Wakefield will continue mentoring younger players during the offseason, as she will hold a skills camp in partnership with Mary Giacalone, the top skating coach in her area.

“There’s not many opportunities for only female camps in the east end of where I live, so we thought it would be a really cool idea to just expose the girls to high level training,” Wakefield said.

After the offseason, Wakefield’s plans are uncertain.

“Because I’m involved with the national team program and going for [the 2018 Olympics], I need to talk it over with Hockey Canada [about] my next move,” Wakefield said. “I would love to play back in Sweden, but if they need to see me play more live, then I’ll probably come back home to Canada. I would love to stay out in Europe, but I don’t really know necessarily what the plan for team Canada will be.”

Regardless of where Wakefield decides to stop next in her travels, the journey will be towards getting ready for the Pyeongchang Olympics, even if her route through Sweden and men's hockey is the one less traveled.

For more information on the all-girls development camp Wakefield is running with Mary Giacalone, keep an eye on jenniferwakefield.ca. The camp will take place the week of July 18 in Courtice, Ontario.