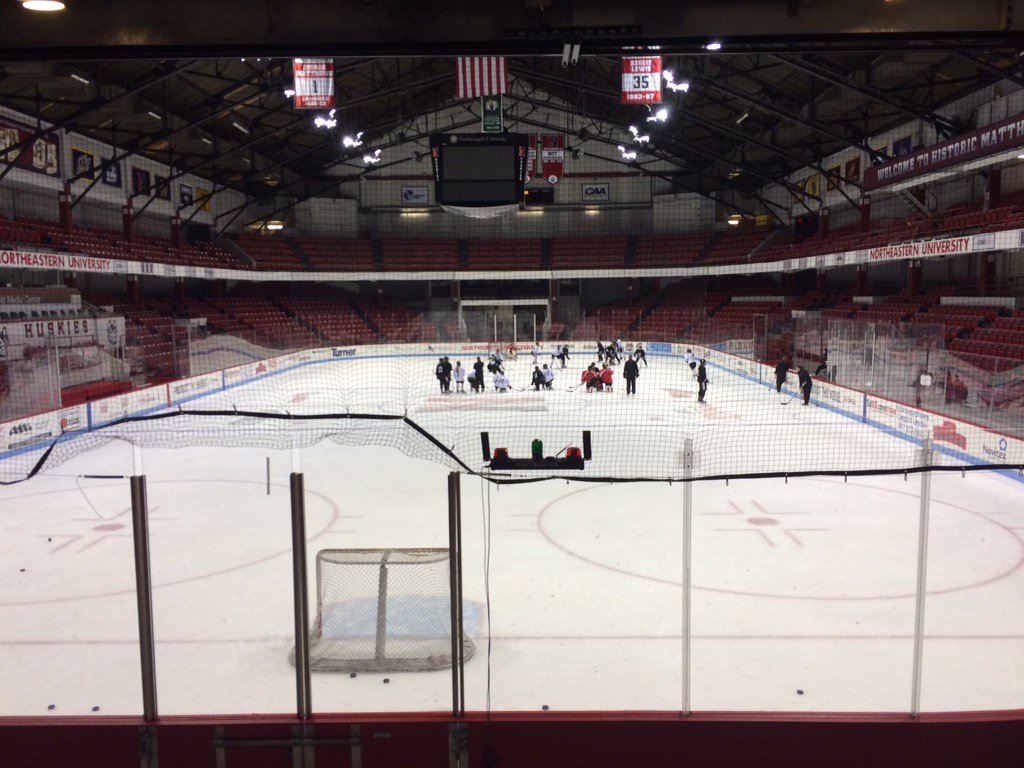 This is a week where some top east coast teams get tested and we will begin to get a clearer picture of which teams are for real and which won't be in the picture come late February.

Neither team has lost a game in Hockey East play, so the winner will have sole possession of first place in the the conference.

BC's Alex Carpenter (32) and NU's Kendall Coyne (30) are the only two players with 30 points or more so far this season and they lead the league in points. Coyne's total is in three fewer games, so she's averaging 2.73 points per game to Carpenter's 2.29.

The teams are second and third in team offense, with Northeastern holding a slight edge, scoring 5.25 goals per game to BC's 5.21.

On the other end of the ice, Northeastern is giving up more than a goal more per game than the Terriers.

The teams are familiar foes and Carpenter and Coyne are teammates on Team USA. But both teams have depth of scoring. For BC, Haley Skarupa has ten goals and 16 assists while freshman Makenna Newkirk is tied for 12th in the nation with nine goals and ten assists. For the Huskies, it's Denisa Krizova with seven goals and 15 assists and Hayley Scamurra with six goals and 12 assists.

Coyne's biggest weapon has always been her speed and many of the teams Northeastern faces can't begin to try to match her on open ice. Boston College has proven capable of that in the past.

It may come down to goaltending and Boston College has the edge with Katie Burt. Northeastern freshman Brittany Bugalski won the starting job and has proven reliable for them, but Burt played in last season's Frozen Four. That big game experience against top competition will serve her well in games like this one.

Watch and listen: Televised Friday Night on MidcoSN and Fox College Sports Pacific (channel 649 on UVerse, Channel 608 on DirecTV).
Free online audio here. Video is available online. It's $8.95 for a 24-hour pass or $9.95 for a one month pass.

North Dakota's been a bit all over the map thus far. They haven't really been able to put together a full series effort against a top opponent. They beat Minnesota, but almost lost to St. Cloud State. They split a series with Ohio State last week and had a tie and a loss to Bemidji State.

NoDak's still ranked, but if they want to remain in the post-season conversation, they need to string together some wins. Currently fourth in the WCHA, they want home-ice for the first round of the conference tournament and need to keep pace.

Despite an disappointing start to the season for the Bulldogs, you can guarantee they'll be hyped up to visit Grand Forks. Expect a tough set of games.

Watch and listen: The game is available online via the Ivy League Network. It's $15.95 for a league-wide month subscription, $10.95 for a single school's monthly pass, and $9.95 for a single event.

Northeastern has a rough weekend ahead, facing their two biggest Boston-area rivals and if they can pass this test, it will do a lot for their strength of schedule and their confidence.

Harvard had a bumpy start to the season and have strung together a few wins since, but Northeastern is by far their toughest test.

↓Wisconsin's scoreless streak -- Difficult to down vote this, but Minnesota-Duluth ended the Badgers' record-breaking scoreless streak when they scored last Saturday. The streak lasted for 624:18. Junior goalie Ann-Renée Desbiens had 545:57 of those minutes, shattering the NCAA record set by former Badger Jessie Vetter by almost 100 minutes.

↑Minnesota's Hannah Brandt -- The Gopher senior had been fighting injuries and sitting on 99 career goals for a few weeks, but obliterated the "slump" with a five-goal game. The first goal made her the fourth Minnesota women's hockey player to reach the 100 goal plateau. The fifth goal gave her 247 career points, making her the program's all-time leading scorer. She has a chance to break Meghan Agosta's all-time NCAA record of 303 career points.

↓Union -- The lone winless team left in the game.

↑Conference clarity -- The highlighted games in Hockey East and the ECAC should help make it clear which teams are the conference best. BC, Harvard, and NU are ranked and have high expectations. But to be the best, you have to beat the best. How these teams emerge from the weekend should help give some indicators of which teams we'll be seeing lead the pack in late February.

↓Differing OT rules -- The WCHA remains the only conference to rely on a shootout and the conference keeps a separate standings column for those wins. For a long time, they were the only conference that needed a way to help separate its top teams. Now Hockey East has 4-on-4 overtime. It definitely feels like this should be a universal rule, whatever they choose. Six of the top ten teams are in direct competition.