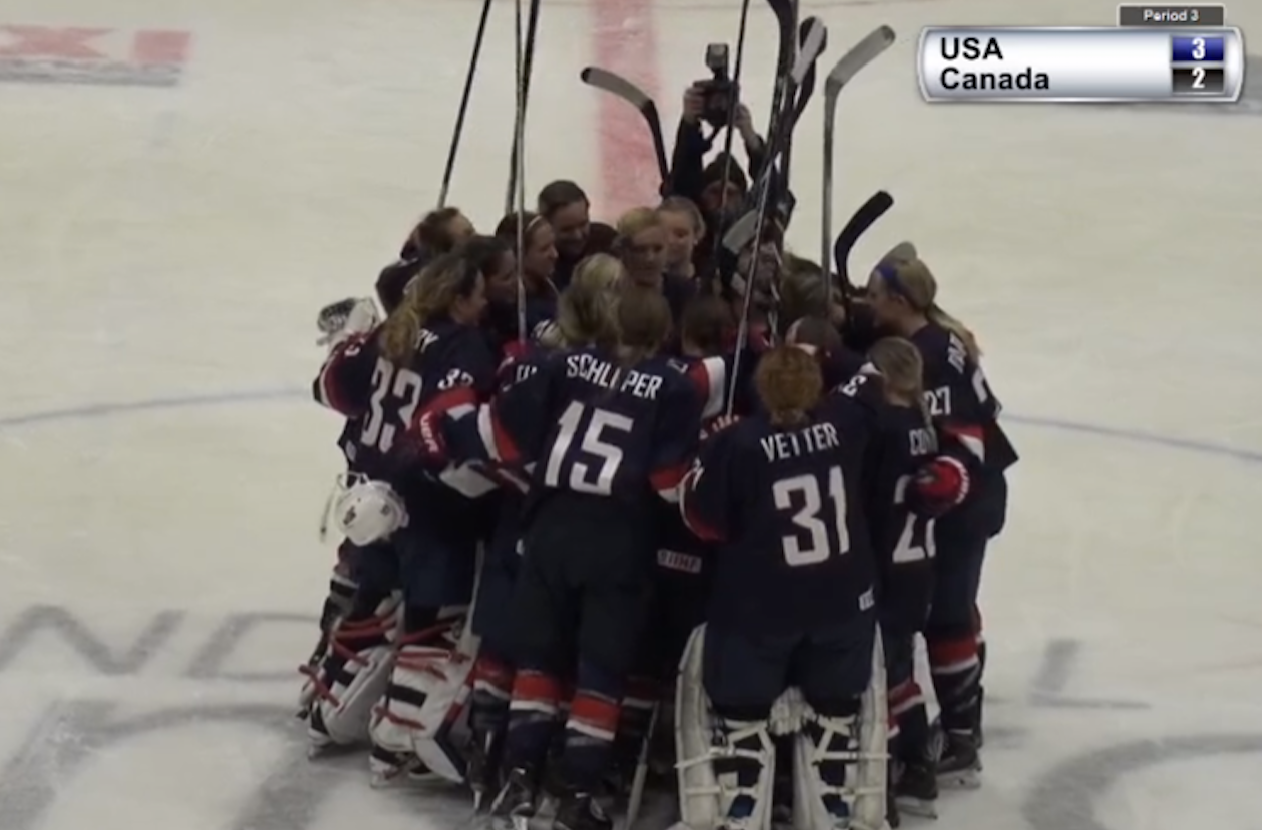 In the bronze medal/third place game, Finland defeated host nation Sweden in overtime. Swedish goaltender Minatsu Murase was excellent in the loss, making 35 saves on 38 shots. The Swedes were only able to muster 19 total shots on Meeri Räisänen, but they still made it to OT knotted at 2-2.

Both of Sweden's goals came from Erica Udén Johansson, the former Quinnipiac forward who is from the Sundsvall area. Finland triumphed on a three-point performance by veteran Riikka Välilä. The OT winner was scored by Jenni Hiirikoski.

The gold medal game was also an overtime victory for the United States.

While most of us in North America were still struggling out of bed and making coffee, the two teams managed a scoreless first period. Monique Lamoureux took a penalty for body checking at the end of the first period, however, and Canada wasted little time capitalizing at the beginning of the second period, scoring with just 9 seconds to go on Team USA's penalty kill. Natalie Spooner took a pass from Marie-Philip Poulin and buried it behind Vetter for the 1-0 lead.

Brianna Decker also scored on the power play in the second period to even the game, getting the last stick on the puck in a pile-up in front of Emerance Maschmeyer. Canada took the lead again on a blast from up high by Meghan Agosta with under six minutes to go in the second.

Decker was able to tie it again at just 1:46 of the third period, taking the pass from Hilary Knight who was streaking down the right side, and driving the net to shuffle the puck past Maschmeyer. While the teams traded power plays, the score stayed even and led to a 10-minute 4-on-4 overtime.

Kelli Stack saw a seam early in OT to hit Hilary Knight with a pass up-ice. Knight stayed just onside and was able to get a partial breakaway, scoring on Maschmeyer and doing an incredible fist pump celebration. This capped Team USA's first Four Nations Cup victory since 2012. It was also another strong performance from Jessie Vetter compared to her last appearances with the national team at the 2015 Women's Worlds and the 2014 Four Nations Cup.

As we read in Nicole's report from Team USA's camp this year, the roster is a slightly different look than Team USA has taken in previous years, leaning much more heavily towards older players whose college careers are behind them.

This would seem to already be the effect of the established CWHL and new NWHL creating an environment where women have the option to play after college at a high level, which likely has effects that are both emotional and physical in terms of conditioning and competitiveness.

While we are still a few years out from the formal roster selection for the 2018 Pyeongchang Olympics, this is a very early first look at the direction Team USA's women's development is heading.

We'll have more detailed coverage as the week goes on about how both American and Canadian national teams are developing going forward, including a look at how CWHL and NWHL players did at the tournament.

And unless you want to catch more Swedish hockey, don't forget to cancel your LiveArena subscription if you signed up to watch the tournament.