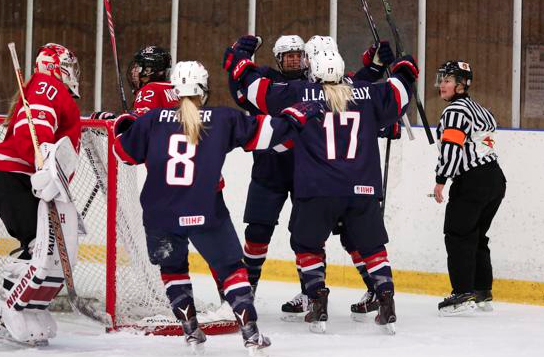 Jessie Vetter got the job done at the 2015 Women's World Championship in Sweden this past April, winning the gold medal game even though she finished the tournament with just a 0.76 save percentage. However, she was perfect in her first start in the 2015 Four Nations Cup against Canada, stopping 31 shots from the defending Four Nations champions. It was the best performance in some time for Vetter, making the 3-0 victory for the Americans a true and complete team effort.

At the other end, Maschmeyer was also strong, but was finally beaten by Monique Lamoureux with a backhander midway through the second period. It ended up being the deciding goal in the game, but Megan Bozek was able to add an insurance goal on the power play with just five minutes to go in the second period.

The shot count for both teams was lower in the third period, as the Americans succeeded in slowing down the pace of the game for long stretches and preventing Canada from having sustained pressure in the offensive zone. It showed the strength of Team USA's blueline, who defended well down low and made smart plays in the neutral zone to reduce pressure on Vetter in the later stages of the game.

Kendall Coyne (selected by the Boston Pride in the first round of the NWHL's 2015 draft) would add a goal with Maschmeyer pulled, picking up some incredible speed to skate past the Canadian defenders and nail the empty net.

Finland beat Team Sweden handily in a game that took place at the same time as the USA-Canada tilt.

Sara Grahn played well, but Finland's Meeri Räisänen was excellent in stopping 21 of 22, including a penalty shot save on Jenni Asserholt. Finland spent a significant amount of time shorthanded, but Sweden was unable to convert on the power play.