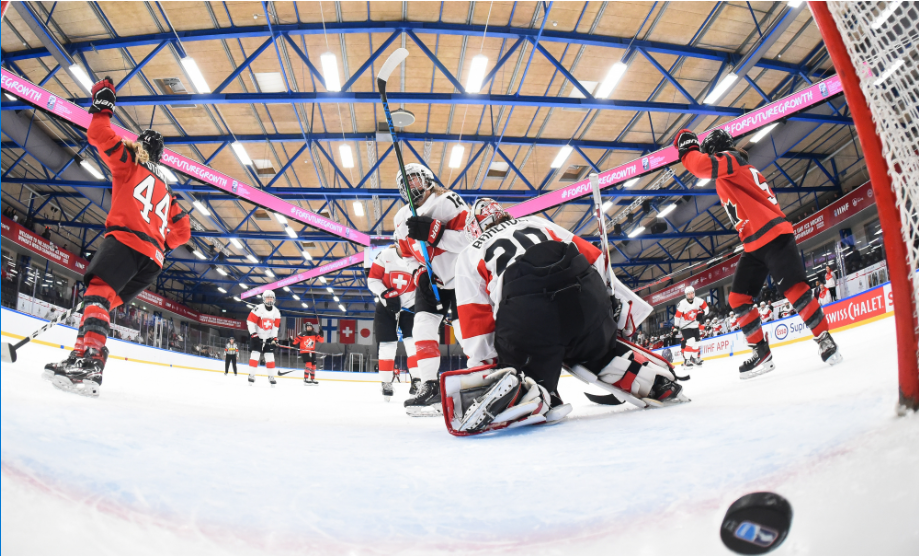 Switzerland opened their 2022 Worlds tournament with a win, thanks to multi-point performances from Lara Stalder and Alina Muller. As I said in my preview, this team is trending upwards.  Though a victory over Japan may not be the most evident proof, they've already scored more goals than they did in last year's preliminary round, so... it's a start.

The Swiss failed to capitalize on three different power-play opportunities in the first period, after both Shiori Koike and Makoto Ito were penalized for separate illegal hits. A boarding call later in the frame also proved fruitless, as did another advantage in the opening minutes of the first period.

Stalder, the captain, finally opened the scoring for Switzerland just over seven minutes into the second period following a solid chance from Japan. Stalder scored off a pass from Muller, slamming a one-time shot into the net. Muller quickly doubled the lead just 1:32 later, striking off a pass from Stalder in the slot.

Switzerland outshot Japan 17-10 in the first two periods. Goaltender Miyuu Masuhara was pulled with about two and a half minutes to play in regulation, and just 21 seconds later, Lena Marie Lutz capitalized on the empty-netter.

Akane Shiga was able to score a late goal for Japan - their first of the tournament. While the end result still wasn't ideal for Japan, it was a major improvement of their earlier 10-0 loss to the USA against a less formidable opponent. Masuhara made 17 saves, while Andrea Brandli had 16 saves on 17 shots faced in her first Worlds' win. Lara Christen led all skaters with 25:44 played.

Czechia wasted no time getting into the game, with Klara Hymlarova and Daniela Pejsova quickly making it 2-0 less than 2:30 in. Although the teams exchanged penalties throughout the period, Czechia outshot Hungary 15-2 in the first. (Even more impressive was their 20-2 shot margin in the third period!) Hungary's first shot on goal didn't come until the eight-minute mark.

Tereza Radova made it a 3-0 game near the midway point on a blocker-side shot, before Adela Sapovalivova struck on the power-play with a tip-in pass less than four minutes later. Czechia had absolute control of the game, and even a power-play tally from Alexandra Huszak wasn't going to change that.

Czechia added three goals in the third period, with Sapovalivova scoring her second of the game. Natalie Mlynkova and Vendula Pribylova also tallied.

The United States decided to switch things up, going with Maddie Rooney in net instead of Nicole Hensley. (Look, I know Aerin Frankel arrived later than the rest of the team due to COVID protocol, but I sincerely hope she actually gets to play.)

While Finland is definitely a tougher opponent, the US had no trouble handling them. Although the win came by 'only' a five-goal margin, the US outshot Finland by a 72-16 margin. Yes, you read that correctly.

From the get-go, the Americans' energy was different than their game against Japan. After squandering an early power-play opportunity, Jincy Dunne made it 1-0 just 6:13 in on a sharp shot from the blueline off a pass from Hannah Brandt. Minutes later, Finland nearly tied the game, but it was waived off and turned into a penalty kill instead. Where the tide of the game could have changed, it didn't.

Abby Roque, who played as the 13th forward despite being one of the best offensive pieces on the ice, made it 2-0 on a power-play goal near the midway point. Parked in front of the net, Roque redirected a shot from Cayla Barnes past netminder Anni Keisala.

Before the second period ended, Amanda Kessel made it 3-0 off a pass from Roque. Shots on goal after 40 minutes were 52-7, and the dominance continued in the third period.

A bright spot of the game for Finland was Ella Viitasuo's goal just 46 seconds into the third. Their rally, however, lasted only a few minutes before Amanda Kessel snapped a one-timer off a pass from Taylor Heise behind the net. Hanna Bilka and Hannah Brandt then scored within 41 seconds later in the game to seal the win.

After having to make 66 saves, I certainly hope Keisala didn't have to buy her own dinner. Definitely not the kind of situation you want to put your goaltender in. Also, let's talk more about Roque. She only played 9:04 as the 13th forward, yet in that limited time, she had a goal and an assist, plus four shots on goal. Wouldn't you want to give a player that good more ice time?!

A closely-contested game ended in a Sweden win thanks to shootout goals from 17-year-old defender Mira Jungåker and Hanna Olsson, who is having a fantastic tournament early on.

The first half of the game was largely uneventful, with no goals and just two penalties. A few minutes can make all the difference, however. Lina Ljungblom opened the scoring with a one-time power-play shot in the dying seconds of another advantage. That goal was immediately followed by another power play for Sweden; although they didn't score, it provided a needed momentum swing. Olsson then made it 2-0 less than a minute later.

Things got interesting in the third period. Anna Kjellbin gave Sweden a three-goal lead just under seven minutes in, but the final nine minutes of play were all Germany's, particularly as their opponent got into some penalty trouble.

Nina Christof scored the first of three power-play goals for Germany. Less than four minutes later, Nicola Eisenschmid scored following a major penalty to Ljungblom for checking from behind. Tanja Eisenschmid also scored on that major power play, with just 42 seconds left in regulation and with an extra attacker, to force overtime.

Emma Soderberg was perfect in the shootout.  Jungåker and Olsson both scored on Sandra Abstreiter. German defender Katarina Jobst-Smith led all skaters in ice time (27:22).

Canada spread out their offense across sixty minutes of play, outshooting Switzerland by a 46-8 margin en route to the win. After a successful early penalty kill, Sarah Fillier struck first for Canada with a long shot from the high slot that deflected off something (or someone) in front of the net.

The Canadians then had to kill off two more penalties, including one late in the opening frame. Fillier struck again near the midway point of the game, beating Andrea Brändli on the short side.

Less than two minutes later, Emily Clark made it a three-goal game, capitalizing off a turnover inside the zone. Clark picked up a pass from Blayre Turnbull and again, beat the goaltender with a quick shot.

Alina Marti scored for Switzerland in the third period - the first time in Worlds history that Switzerland scored against Canada. Laura Zimmerman found Marti with a pass in the slot; she got a quick shot off to beat the netminder. Finally, Blayre Turnbull added the insurance goal with under ninety seconds left in the game.

Brändli had 42 saves in the loss, while Ann-Renee Desbiens needed to make only seven saves at the other end of the ice for her second win of the tournament.

Michelle Weis opened the scoring with what wound up being Denmark's lone goal of the game, less than 13 minutes in. Weis capitalized on a power-play, Denmark's second of the game, to give them the lead. Goaltender Klara Peslarova failed to control the puck, which slipped out of her glove and into the net.

Before the opening twenty minutes were in the books, however, Katerina Mrazova tied it for Czechia off a pass from Dominika Laskova, also on the power play. Denmark got into their own penalty trouble, giving their opponent nearly back-to-back advantages.

The onslaught of penalties continued in the second period, with Czechia eventually ending up with a two-player advantage. They capitalized in the final second (literally), with Natálie Mlýnková making it a 2-1 game off a give-and-go with Mrazova.

Daniela Pejšová scored twice in the third period. Michaela Pejzlová also tallied. Four of Czechia's five goals came on the power play, while the final shots on goal tally was 49-13 after the team really began to pour it on in the second period.