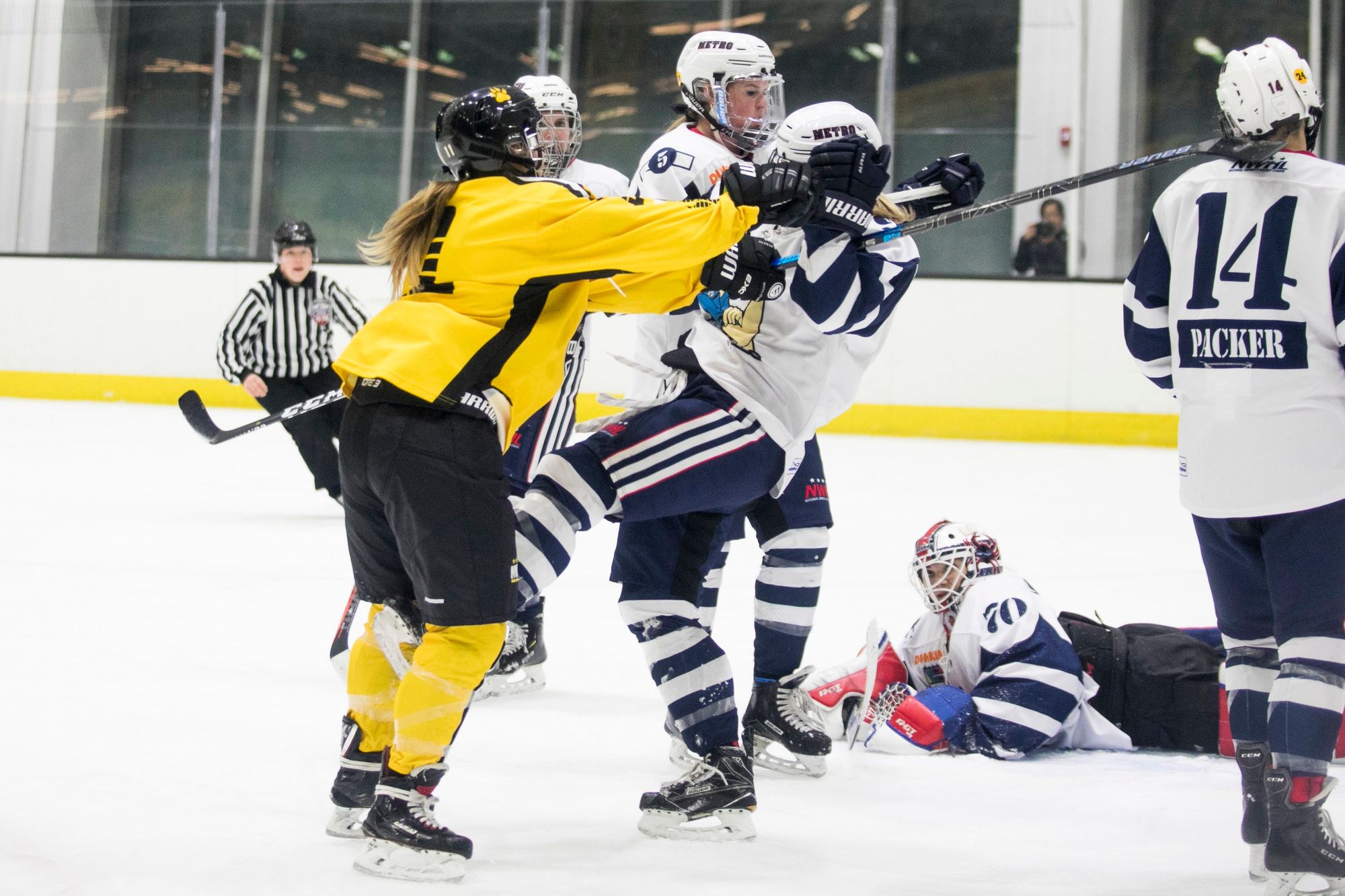 The NWHL's Metropolitan Riveters split their weekend, falling to the league-leading Boston Pride before beating the last-place Connecticut Whale the following day. The Buffalo Beauts also defeated the Whale to maintain their hold on second place. The Minnesota Whitecaps were inactive this past weekend.

Once again, the Beauts came out with a win against the Whale, this time in their final meeting of the season. Erin Gehen had two goals, and Marie-Jo Pelletier notched three assists in the win.

The game started off somewhat tentative, with no shots on goal on either side in the first three minutes. Gehen put her team up with a wrist shot from the slot off a pass from Pelletier less than five minutes in, and it got the Beauts going.

Just over four minutes later, Cassidy MacPherson scored on the power play on a shot down low on the far side of Sonjia Shelly. Before the Beauts could really run away with the game, however, the Whale got one back. Kelsey Neumann made the initial stop, but failed to cover the puck, and Kayla Meneghin pounced on it to halve the deficit.

Buffalo regained the two-goal lead on a tally from the captain, Corinne Buie, early in the second period. After Shelly made an initial save, Buie capitalized on an opportunity off the rebound as she was driving to the net.

Quickly, though, the Whale got one back. Elena Gualtieri made a saucer pass toward the net, which Jane Morisette deflected out of mid-air.

WATCH: This will almost certainly be the goal of the weekend and just might be the GOAL OF THE YEAR!!! What an unbelievable play by Elena Gualtieri and @JaneMorrisette who connected for this BEAUTY for the @CTWhale_NWHL. Great call from @MattFPxP.

As the Beauts clung to the one-goal lead, the Whale pushed hard for the equalizer, but each team only ended up recording six shots aside in the middle frame. Gehen scored her second of the night on one of those shots; Connecticut couldn't get the puck out of the zone, and MacPherson got the puck out in front with a feed from behind the net to a waiting Gehen for the tally.

Buffalo added a pair of goals in the third period en route to the 6-2 win. Kim Brown scored on a rip of a shot that went top shelf under the crossbar before Taylor Accursi tallied on the power play with under six minutes to play.

Saturday's matchup between Boston and Metropolitan was arguably the closest we've seen this season in a game involving the Pride. Although in the end, Boston remained undefeated with a 5-2 victory, it was a closely-played contest and the Riveters gave the Pride a run for their money.

The game was also the first for the Riveters after a lengthy break; they hadn't played since October 27. Coming out of the break, they showcased a fresh energy and struck first, midway through the first period. After Boston put the pressure on, the Riveters finally got it out of the zone & Kate Leary beat a Pride defender in a 1-on-1 challenge to make it 1-0. This marks the first time all season that the Pride have not scored first in a game.

The lead lasted only a few minutes, however, as Alyssa Wohlfeiler tied the game on a perfect setup from across the ice from teammate Mary Parker. Before the opening twenty minutes were over, Boston made it 2-1 as Parker herself scored top-shelf.

The Pride nearly scored again a short time later, but the play was eventually ruled no goal and play continued.

Midway through the second period, the Riveters rallied back, as Leary scored her second of the game. An initial shot by Cailey Hutchison from the point was deflected several times en route to the net.

But less than six minutes later, the Pride regained their lead. Emily Fluke picked up a pass from Mallory Souliotis in front of the net and made it look easy as she put it behind the goaltender Sam Walther.

The Pride added two more goals in the third period en route to a 5-2 victory. Captain Jillian Dempsey scored top-shelf off an accidental drop pass from Christina Putigna, and McKenna Brand recorded her league-leading 11th goal off a backhand pass from Dempsey.

Riveters fans finally have something to cheer about, as the team finally recorded its first win of the season with a 2-1 victory over the still-winless Whale on Sunday evening. Meanwhile, the Whale haven't registered a win in over a year, with their last victory coming on December 2, 2018.

On Sunday evening, the Riveters got on the board just 3:47 in with a goal from captain Madison Packer. After a chance at the other end, the Riveters skated the puck down the ice. A nice pass from Kate Leary in front of the net found Packer, who scored on the backhand.

Metropolitan would maintain the 1-0 lead through 40 minutes of play, despite being outshot 21-13 in that frame of time. Brooke Baker then intercepted an errant pass from a Whale player and made it 2-0 from the top of the crease with a shorthanded tally early in the third.

Emma Vlasic put the Whale on the board in the final minutes of the game, scoring a power-play goal with the extra attacker on the ice and the goaltender pulled. In the end, the Whale had eight power-play opportunities, but couldn't find the equalizer.

Sam Walther made 33 saves in the win. At the other end, Sonjia Shelly made 23 saves.

This coming weekend features two NWHL games. The Riveters host the Pride on Saturday at 7:00 PM Eastern before visiting the Whale on Sunday at 1:30 PM Eastern.

Boston Pride netminder Lovisa Selander has been named to Team Sweden's roster for the Four Nations Tournament, which will be held in Fussen, Germany from December 12 through December 14. In nine NWHL games, she has recorded a .946 save percentage and 1.79 GAA.