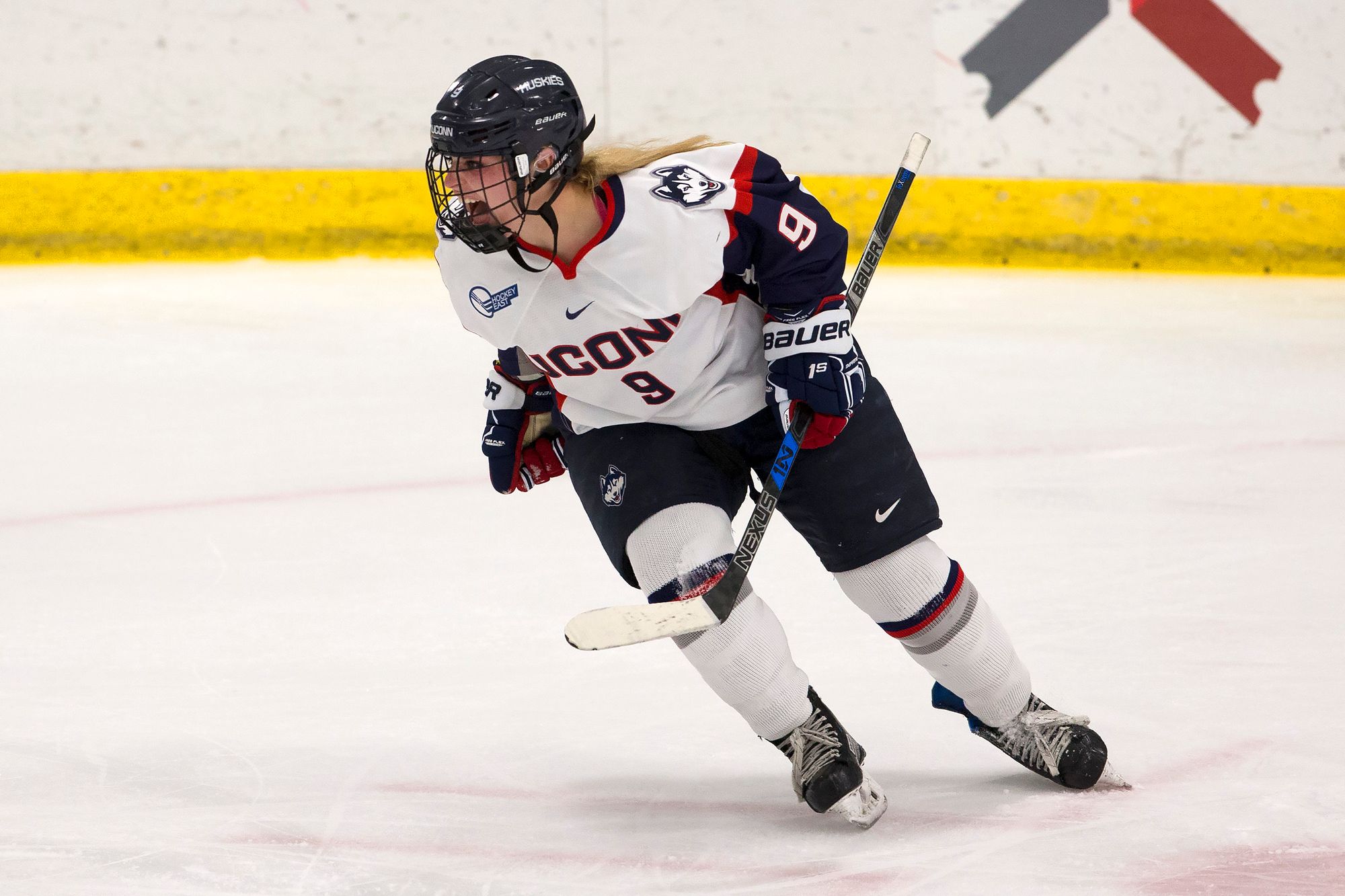 Like with any other college road trip, the University of Connecticut women's hockey team boarded a bus in the middle of last week ahead of a two-game weekend slate. This was a first for the team: the Huskies were traveling to Buffalo, NY for the inaugural Women's College Hockey IceBreaker, where they'd face opponents like Mercyhurst, Minnesota-Duluth, and Colgate.

For junior forward Natalie Snodgrass, however, the trip was a little more special.

The roughly six and a half hour bus ride would take Snodgrass back to the rinks at LECOM Harborcenter – where she won a gold medal with the United States at the 2015 IIHF Women's U-18 World Championships.

"Being on the bus ride here, it just gave me chills," Snodgtrass said. "Being in the presence of what I did back then, it's really cool and definitely motivated me for this weekend."

At the time, Snodgrass was a junior at Eastview High School in Apple Valley, Minnesota. She'd already participated in several events as a part of USA Hockey, including the Under-18 Series, player development camps, and had been invited to the USA Hockey Women's National Festival.

In mid-January 2015, she added a U18 gold medal to her repertoire. Not bad for a 16-year-old who was barely old enough to hold a driver’s license.

Snodgrass appeared in five games during the 2015 contest in Buffalo. She was on the bench when Jincy Dunne scored the infamous gold-medal winning goal in overtime, boosting Team USA to a 3-2 victory over rival Canada in front of a packed crowd filled with enthusiastic, energetic fans.

"That's what I kind of noticed," Snodgrass said as she reflected back. "Being on the bench... I always kind of picture all the USA fans with their flags, probably one of the biggest crowds I'd ever played in front of in high school."

"Then with Jincy scoring, I remember being on the bench and absolutely dog-piling everyone," she added with a smile. "Really good memories."

Women's hockey fans will recognize several others who participated in the 2015 tournament, including Melissa Samoskevich, Cayla Barnes, and Katie Burt for Team USA. Sarah Potomak and Jaycee Gebhard both played for Canada that year; UMD's Emma Söderberg suited up for Sweden, too.

Snodgrass found herself back at Harborcenter the following year, suiting up with her USA teammates for a training camp ahead of the 2016 U-18 tournament, as well as an exhibition game against the NWHL's Buffalo Beauts.

"It was a little different feeling because the tournament itself wasn't here," Snodgrass said. "But it's a beautiful facility, they treat us really well, and I just have really good experiences every time I've been here."

Fast-forward a few years, and Snodgrass has continued to rack up the accolades. She won another gold medal with that team in 2016 and led the US with seven points, including six goals – one of which was the gold-medal winning overtime tally. In addition, she's been part of both the U-18 and 8-22 Women's Select teams, and been invited to two more national festivals.

After a high school career that saw her average 1.24 points per game, Snodgrass joined UConn in 2017; she's continued to put up impressive numbers ever since. During her rookie season, she led the team in goals and points, becoming the first freshman to do so since her sister (2011-12). In her time with the Huskies so far, she’s accrued 73 points, including 38 goals, in 82 games.

Her time at UConn, she says, has been invaluable to her growth on and off the ice.

"Looking back, I see how mature I've grown as a hockey player," she said. "You look at the freshmen now, and you see that there's a learning curve. You don't really realize it... but I used be that player, that inexperienced hockey player, even though I thought I was as talented as the other girls."

"I think I've matured a lot in the D-zone and the offensive zone, a lot of structure and skill," she added.

Snodgrass is an alternate captain for the Huskies this year.

"It's an honor," she said. "I'm very humbled with that. But I think that our team as a whole, it doesn't matter if you have a letter. Everyone steps up in their own way."

"I'm not one to really be verbal, so I lead by example and I think a lot of players follow in that suit," Snodgrass added. "It's really neat to see some of last year's freshmen, who are now sophomores, stepping up that way, too."

As of writing, Connecticut is fourth in the Hockey East standings with an overall record of 4-4-0 (2-2-0 in conference play).

Their season kicked off with exhibitions against Ryerson and the Connecticut Whale, before the Huskies traveled to Brooklyn for the first-ever game with the Long Island University (LIU) Sharks. Connecticut swept that weekend, and has since faced opponents including Holy Cross, Merrimack, and New Hampshire.

"We've definitely had some cool opportunities at the start, but now we're getting into our Hockey East play, which means getting a chance to see all those rivals again. BC's coming up, BU again," Snodgrass said. "We're definitely excited to get the Hockey East play going."

The Huskies return to action after more than a week's break as they host Brown for a rare Tuesday night game on November 5. BC, Vermont and Maine are among their other opponents in the weeks ahead. Connecticut also participates in the Nutmeg Classic in Hamden, along with Yale, Quinnipiac, and Minnesota Duluth.