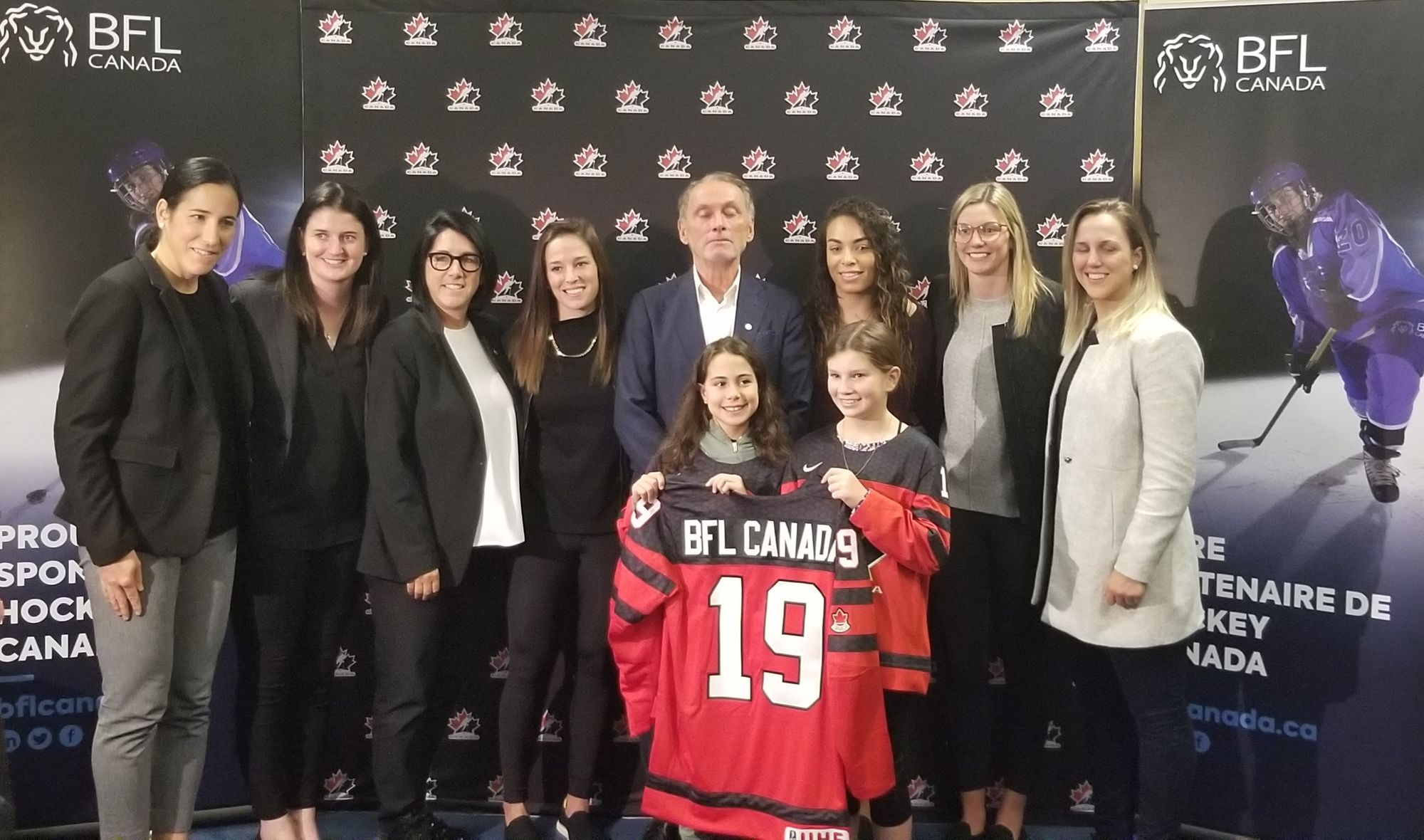 On October 2, Hockey Canada announced a five-year international marketing partnership with BFL Canada, focused on supporting women's hockey programming. The multi-million dollar investment will include BFL becoming a title sponsor of annual high performance camps at the U18, development, and senior levels, the introduction of a coaching award that will recognize 26 female coaches each year, a coaching mentorship program, and sponsorship of both the IIHF World Girls Ice Hockey Weekend and the IIHF Global Girls' Game. BFL will also be a partner of all Women's World Championships through 2024, including both 2020 and 2023 on home ice in Canada.

The primary impact of the investment, according to Gina Kingsbury, will be in ensuring stability for existing program structures throughout the quad, leading into the Olympics in 2022 in Beijing. In addition to the high performance program, there's a focus on the grassroots, with funding towards programming designed to expand girls hockey across the country.

The added money also provides more security and versatility for Hockey Canada in its relationship with its players. The national women's team quietly renegotiated its athlete agreements in recent years, and Kingsbury noted that increased resources for the program can be used in a variety of ways, including direct player compensation.

"Any dollar amount allows us to be flexible on how we support them, and be able to support more," she said. "So if it's camps and events or it's directly to the athletes, again, more investment allows us to be able to support them in different aspects and different avenues. So of course this helps us a great deal down the road as well, supporting our athletes individually."

Much of the conversation at the event centred on the pivotal moment women's hockey is experiencing, and the need for a sustainable professional league going forward. BFL president and CEO Barry Lorenzetti declined to comment on the topic of funding the sport at the professional level, saying only that there may be another announcement in the future, but Cassie Campbell-Pascall confirmed in a tweet that BFL would also be supporting the PWHPA.

To account for the current lack of a league structure, Hockey Canada has introduced a series of seven mini-camps for post-collegiate players. The camps will ensure that players are involved with the program every few weeks throughout the season. The first edition ran from September 30 to October 3 in Montreal, with two more scheduled to take place in Montreal this fall and the possibility of a fourth in the city "after Christmas." Others will be based in Toronto and Kitchener in 2020.

What this regular contact with older players also allows is for Hockey Canada to emphasize youth evaluation at other events throughout the year.

Hockey Canada and USA Hockey have already scheduled a two-game series in Hartford, Connecticut and Moncton, New Brunswick in December, as well as a Rivalry Series in February with games in Vancouver and Victoria, British Columbia, as well as Anaheim, California. The two federations are expected to announce another series shortly for the early-November time window allotted for the 4 Nations Cup, which host Sweden cancelled in response to a boycott by its entire national team pool.

"It's very important for us to be able to provide that critical experience, both to our athletes and our staff, just building our program to where it needs to be," Kingsbury explained. "Four Nations, for us, was a big piece of the puzzle. It was five games overseas and provided us that structure and that environment, so we're trying to recreate something similar, something that we feel that will benefit us down the road."

Rosters for that series, in particular -- at least on the Canadian side -- are expected to lean young, featuring an assortment of college players.

"We're looking at bringing younger and younger players to certain events," Kingsbury acknowledged, adding that nothing would change within the development program itself. "With these mini-camps where we're focusing on our older players that are out of college, it provides us to be able to be a little bit more flexible, maybe, in other tournaments or other games where we could bring some of our younger players and see where they fit and where they stand, so that we can be healthy for years to come."

While this year's program structure is unique, Hockey Canada is hopeful that a format created through frustrating circumstances can ultimately be transformed into an advantage heading into the 2020 World Championships in Halifax and Truro, Nova Scotia, and that the stability brought forth by the five-year partnership will foster success come 2022 in Beijing.