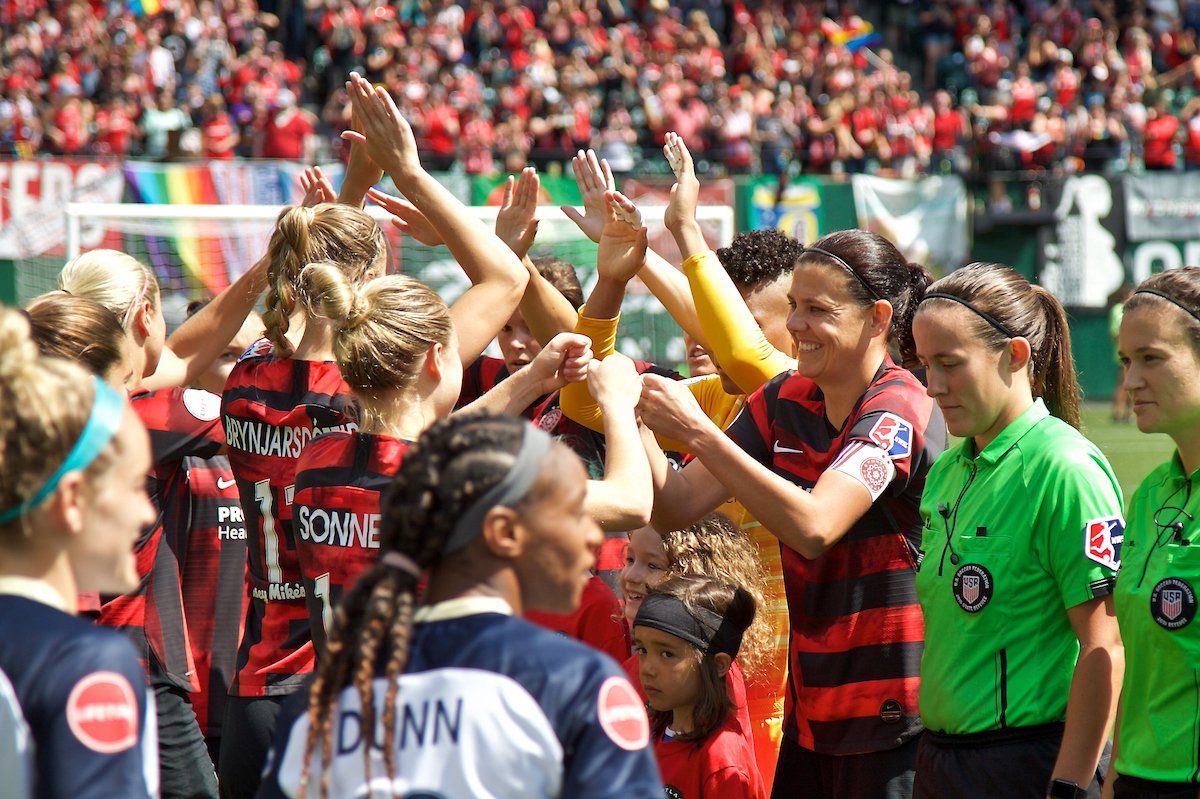 Is there a German word for winning without scoring any goals?

The Portland Thorns held on to their spot at the top of the table last Sunday in front of a record-breaking crowd of 25,000+ at Providence Park, but they managed to do so without actually scoring once. The North Carolina Courage struck first thanks to some harmonious interplay between Lynn Williams, Kristen Hamilton, and Crystal Dunn, but the Thorns equalized on a misguided clearance from Stephanie Labbé, and got the go-ahead on an own goal from Abby Erceg. If I were an even bigger hack, this is where I would make a joke about how "defense wins games, but it's usually for your own team." The Thorns' actual best player on the day was keeper Adrianna Franch, who seemed to be able to stop Hamilton, Dunn and co. at just about every conceivable angle.

Anyway, chaos comes for everyone in the NWSL – it is a lioness licking her chops, awaiting each top-ranked side as they gazelle-prance up the ladder. It came for the Courage on Sunday, and it came for the Red Stars last night, who after five resonant wins, fell to a bottom-ranked Sky Blue FC for the second time this season. Although Chicago came out charging, Kailen Sheridan's mastery in goal and a spectacular top-corner strike from Paige Monaghan earned the Jersey side's third win of the season, and their second against the Red Stars. Who will chaos come for this weekend? Before the end of the season? It's still anyone's title, and may chaos rule.

Is there a possible outcome for the Women's ICC except "Lyon demolishes everything"?

Speaking of the Courage, as defending NWSL champions, they'll host the second annual Women's International Champions Cup starting today in Cary, welcoming three more of the world's top WoSo clubs for some preseason action. It's not quite the international footballing lovefest that the World Cup was, but the ICC does grant us the opportunity to revisit some of our favorite Good Good WoSo Friends from the World Cup, and offer a look at the season ahead in the European domestic leagues.

And although preseason tournaments mean absolutely sod-all and only exist for money and marketing reasons, after seeing thousands of people flock to South Bend, Indiana for a preseason match between Liverpool and Borussia Dortmund's men's sides earlier this summer, it's nice to think about a future wherein women's domestic sides also draw that kind of attention for preseason.  (Let's also mention that the Courage will have to balance this tournament with their regular-season needs, which is taxing on any club, so it ought to be for a good reason.)

All four of these teams are also very good! Atlético Madrid has the swipey-banged brick house that is Elena Linari in their back four and World Cup Golden Glove winner Sari van Veenendaal in goal, delectable foils to the likes of the Courage’s Kristen Hamilton and Debinha. Manchester City offers a Who's Who of the England team, including veterans Steph Houghton, Karen Bardsley and World Cup goal machine Ellen White. But even after they finished as runners-up last year and don't have home-pitch advantage, it’s hard to envision a scenario in which this tournament isn't Olympique Lyonnais's to lose. Lyon is the Broken Social Scene of WoSo, a collective whose individuals are already impressive (Wendie Renard! Lucy Bronze! Ada Hegerberg, who is probably the Leslie Feist!), but together create something admirable and complete. Oh, and they added another England player who shone at the World Cup, Nikita Parris! Even if you don't care about summer preseason tournaments, it's going to be fun getting to see these players and what they can do together again.

Will Louisville be the next great WoSo city?

In the wake of the World Cup, soccer fans around the United States are campaigning to bring the NWSL to their cities. There have been ongoing efforts in big soccer cities like Atlanta and Los Angeles, but reports this week have pointed to the next WoSo side coming out of Louisville. Nothing is confirmed yet, but a partnership with Louisville City FC, a USL side, has some advantages, including a soccer-specific stadium in the city (like a Portland or Orlando), sharing of resources, and a built-in, passionate fanbase led by the fans known as "The Coopers." Louisville's geographic location also lends nicely to potential rivalries with Chicago and North Carolina.

But with another expansion that could potentially involve affiliation with a men's side, a question to ask is whether the NWSL moving further away from independent clubs and closer to this being the normal for expansion (see also: Utah, Orlando). And will that normal create a larger gulf between the haves and have-nots in a still-growing league? But if it means a more sustainable and prosperous league, and making the NWSL more geographically accessible to more people, does affiliation matter? Is it worth having a slightly uneven playing field sometimes if it keeps growing WoSo in America? I don't know, man, I just work here.

MLS continues to dig itself deeper into a Nazi-enabling suck-hole by doubling down across the league on its "no political speech" policy, and fans are responding loudly, with many supporters' groups providing their own interpretation of the Iron Front in tifo and banners.

This past weekend in Atlanta, members of Atlanta United supporters group The Resurgence had a number of banners confiscated by stadium security, including one with the wildly controversial message, "End Gun Violence." The weekend before, Philadelphia Union star Alejandro Bedoya grabbed a sideline mic and gave an impassioned plea to Congress to end gun violence after scoring a goal. MLS named him Player of the Week, while some of the United supporters were handed multi-match stadium bans.

As MLS doubles down on this ridiculous policy (and Alexi Lalas concern trolls anti-fascist soccer supporters, because why wouldn't he?), opposition to it is growing stronger and louder and building across North American soccer. In addition to the MLS Players' Association tweeting in support of its fans and opposition to the policy, supporters' sections all over the country are displaying flags and banners with their takes on the anti-fascist Iron Front symbol as part of the #AUnitedFront campaign. Over the weekend, members of Reign FC supporters group the Royal Guard displayed a Cascadia-inspired version.

Although NWSL does not have the same policy around political messaging or documented issues with a violent far-right element as MLS, it's a reminder that the power to dictate a club's culture rests with supporters. It's supporters who decide a club's ethos and values and inclusion, who set the atmosphere and the tone, who decide their priorities. NWSL supporters, like supporters of any other North American soccer club, have the opportunity to set a tone of solidarity.