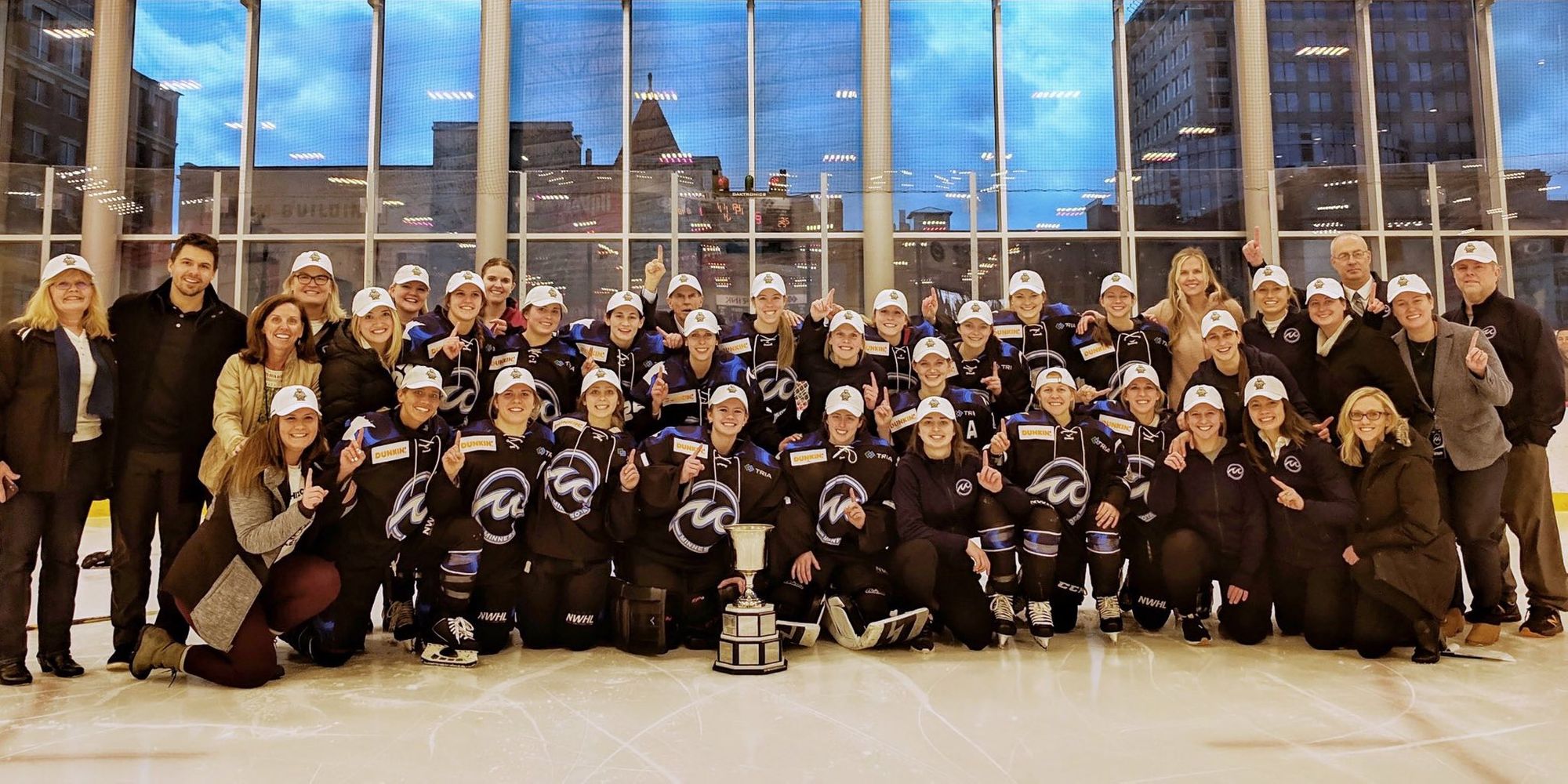 The Minnesota Whitecaps finished off an extraordinary inaugural NWHL season with the franchise's first Isobel Cup, beating the Buffalo Beauts in overtime on Sunday to claim the championship.

It took just over 60 minutes of action for the Whitecaps to capture a 2-1 win on home ice at TRIA Rink in front of a sold-out crowd, with Lee Stecklein scoring the game-winning goal 49 seconds into overtime.

As expected, it was a tight game. The Beauts dominated play early on, limiting the Whitecaps' time with the puck and putting a few shots on net. As Minnesota began to find their legs, the game evened out and it was up to Nicole Hensley and Amanda Leveille to keep the pucks out of the net.

Minnesota began to earn more chances and started several odd-player rushes, but kept putting themselves offsides to stop the play. They also found themselves on the power play with Kelly Babstock in box for Buffalo, but were unable to capitalize.

The Beauts managed to strike first. Defender Emily Pfalzer took a shot from the point and the puck flew through a crowd and into the back of the net. Blake Bolden and Annika Zalewski notched assists on the goal, which came with just under three minutes left in the first period.

The Whitecaps quickly tied the game just 1:22 later. Amy Menke took a shot from the short side and put it over Hensley and into the net. Hensley had little chance on the tying goal, and the teams skated off tied at one.

As the game continued, both teams played physically and exchanged several power play opportunities, but failed to capitalize, time and time again. Both Leveille and Hensley made multiple spectacular saves and played lights-out to keep the opposing team from getting a lead. In addition, both teams were extraordinary at blocking shots and preventing offensive opportunities in tight on their netminders.

With 60 minutes in the books, NWHL history was made: this is the first time the Isobel Cup champion was decided in overtime. As it turned out, the teams required only 49 seconds of extra hockey to determine the victor, with Lee Stecklein blasting one from the blueline and in through Hensley's five hole.

The Whitecaps outshot the Beauts 31-23. Minnesota went 0-for-4 on the power play, while Buffalo went 0-for-3. Leveille recorded 22 saves, while Hensley had 29. Hensley was called into the starting goaltender spot for Sunday's championship game with Shannon Szabados sidelined (day-to-day) with a lower-body injury.

Stecklein, with the championship-winning goal, was named playoff Most Valuable Player. It was her first goal of the playoffs, and only her second goal of the season (and first since December 29), but it certainly was a huge one in front of the sold-out home crowd.

With Minnesota's win, four different teams have won the Isobel Cup since the NWHL's creation. With Boston winning in 2016, Buffalo in 2017, Metropolitan in 2018, and now Minnesota, the Connecticut Whale are now the only NWHL team without an Isobel Cup championship.

That means that next season, we'll either see the Whale win it for the first time, or an NWHL team will make history and become the first team to win it twice. (Assuming the league doesn't add anymore teams in the offseason, that is.)

The Whitecaps organization is also the first to have won both the Isobel Cup (NWHL, 2019) and the Clarkson Cup (WWHL, 2010).

With another NWHL season in the books, stay tuned for more team season reviews, free agency coverage, and regular updates throughout the offseason!