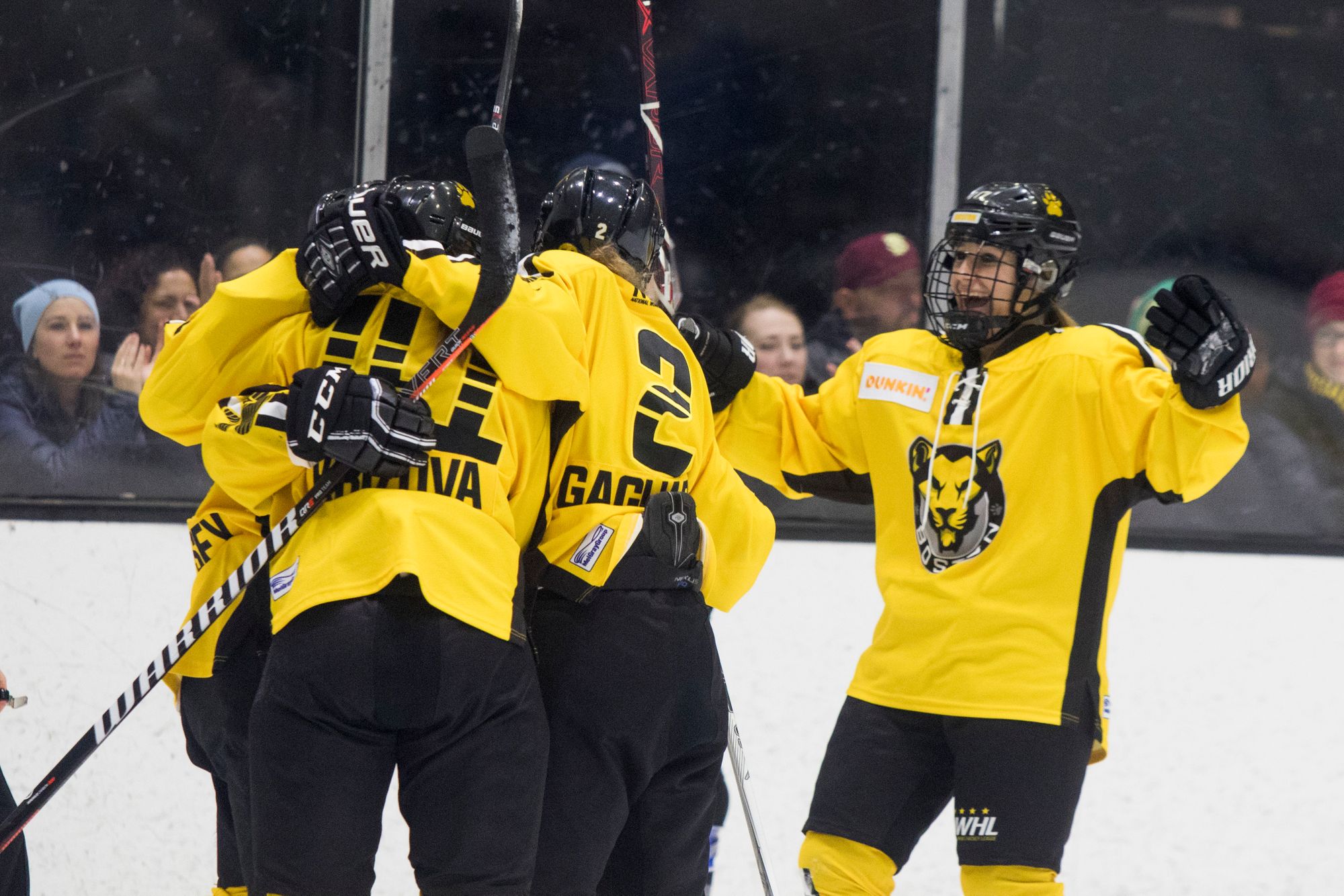 It was another disappointing season for the Boston Pride, who finished the season third overall (out of five teams) and saw a first-round playoff exit to the Beauts.

It wasn't all bad for the Pride, however. They won 11 games during the season, compared to just four victories in the prior season. They also saw spectacular attendance numbers at Warrior Ice Arena this year, including some sellouts. As I said in my season preview way back when, the Pride were more of a contender this year. In the end, however, they didn't make it any further.

The Pride's roster this season was a mix of returning players and newcomers. Among those gone: Janine Weber and Paige Harrington. Among the newcomers: Denisa Křížová, Lauren Kelly, McKenna Brand, Toni Ann Miano, and goaltender Katie Burt. Gigi Marvin returned to the Pride after having been centralized with the US National Team the previous season, providing a huge boost to the team.

Haley Skarupa led the team with 18 points, including a team-high 12 assists. Brand registered 17 points (6G, 11A) in 16 games, while Marvin also put up 16 points (10G, 6A) in just 15 games while playing mostly as a forward. Křížová registered 14 points in her first NWHL season.

Captain Jillian Dempsey finished the season with 10 goals, tied with Marvin and Buffalo's Hayley Scamurra for second in the league. Skarupa's 12 assists were also tied for second-best in the league.

In net, Katie Burt took the helm for much of the season. She finished the season 11-5 with a 2.26 GAA and .920 save percentage. Brittany Ott, once Boston’s absolute starter, played only 31:55 all season long. Madison Litchfield, the Pride’s third goaltender, did not play at all.

It was a bit of a surprise to see Burt take such complete control in net for Boston. For so long, it seemed like it was Ott's net, so to see her displaced as the top goaltender for the Pride was just strange for someone who's watched the NWHL since the beginning. That being said, Burt has been a great addition for the Pride.

The Pride opened the season with five consecutive home games, of which they won three. Their first game was a 5-1 win against the Riveters, then a 4-2 victory over the Whale. They finally suffered their first loss of the season in week three, but rebounded for a win over the Beauts in their next game.

It was overall a season of ups and downs. They went back and forth with wins and losses, but at one point won four straight from December 1st through the 30th, including a pair over the top-ranked Minnesota Whitecaps. In those four games, Boston outscored their opponents 19-5.

But that four-game streak was followed by a 5-0 loss to the Beauts to kick off the 2019 calendar year – not exactly what Boston was hoping for. They continued to go back and forth as the season progressed and won three of their last four regular season games.

Finishing the regular season in third meant the Pride had to travel for their Isobel Cup semifinal game in Buffalo. Ultimately, they flopped and fell 4-0 to end their season.

↑ The Pride scored a league-high 60 goals this season, including 23 in the third period and 21 in the first period (best in the league). They finished the season with a plus-24 goal differential and an average 3.75 GPG

↑↓ The Pride took "only" 477 shots on goal this season, third-most in the league. But their shooting percentage was outstanding: 12.6%, best in the NWHL.

↑ Boston was also the best NWHL team on the power play, capitalizing on 22.9% of their opportunities with 11 power-play goals. They also had the best penalty kill (92.9%).

↓ The Pride were one of two NWHL teams – along with the Riveters – who didn't register a shutout over the course of the season.

After one season with Thomas Poeck behind the bench in Boston, the Pride found themselves with a new head coach this season: former NHLer Paul Mara. Mara had previously served as an assistant coach with the 2018 USWNT team that won gold at the Olympics in Pyeongchang.

Marissa Gedman served as an assistant coach this season.

After failing to make the championship in two consecutive seasons – and after making the final in each of the first two season – the Pride are looking to get back on the winning side of things next season. The introduction of Katie Burt to the NWHL has been a huge boost, and if she returns, will be a key going forward. It'll also be interesting to see if Gigi Marvin returns in her capacity as a forward or if she returns to the blueline next season.