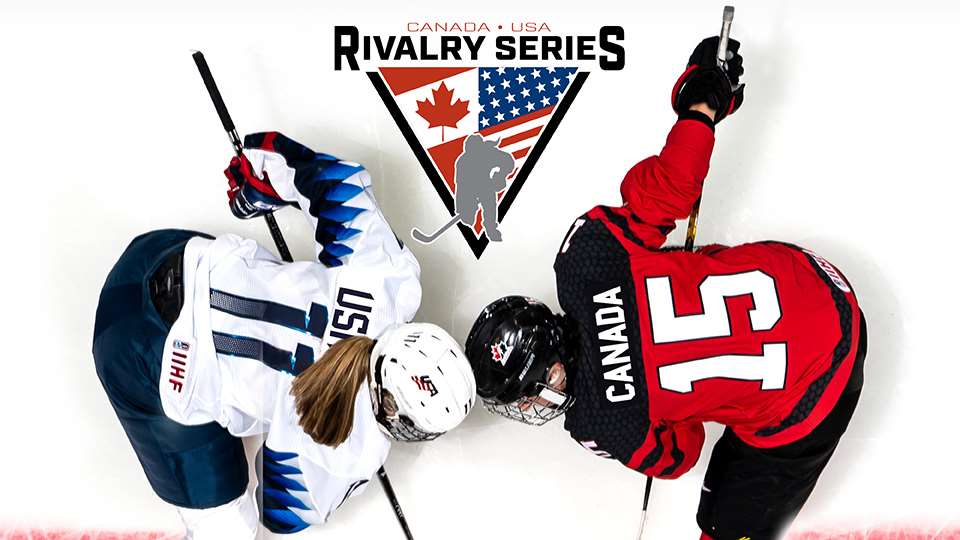 Tonight's the night that Team USA and Team Canada's senior teams return to the ice to face off in one of the greatest rivalries in sports.  The exhibition series, dubbed the "Rivalry Series" by USA Hockey and Hockey Canada, is exactly what it says it is.  The three-game exhibition will be televised fully on NHL Network in the US and TSN/RDS in Canada, three years out from the Olympics – which now seems like an obvious choice even to the wider hockey masses who might not yet be convinced that women's hockey at its highest level is better television than your average regular season NHL game.

Exhibitions between these two teams have been hotly contested.  The greatest thing about a rivalry of this caliber is that it feels like every game matters, whether it's for Olympic gold or nothing at all.  It's a chance to see many of the most talented players in the world competing against each other – true best-on-best play.  It's also a great look at the rosters, coaches, and their chemistry ahead of IIHF and other competition.  Any hockey player will tell you that every chance they get to play against the best in the sport is something they look forward to.  What's a little unusual about this series is that many fans will get to join in on a national broadcast, which is uncommon outside of Olympic years even for the IIHF Worlds.  In short: it should be a good time.

Tonight's game is the first of three, with a 7:00 PM Eastern puck drop at London, Ontario's Budweiser Gardens, which is sold out.  The second game will be contested on Thursday, February 14 at Toronto's Scotiabank Arena, also at 7:00 PM Eastern.  Game three will be at Little Caesars Arena in Detroit, Michigan at 12:00 PM Eastern on February 17.

Both rosters lack NCAA player participation due to school schedules and the particularly competitive stretch at this time of the NCAA season.

CWHL rookies Brittany Howard (Toronto) and Rebecca Leslie (Calgary) will be making their senior team debuts.  It is also a Team Canada debut for Howard, while Leslie previously represented her country in U18s.  Leslie is third in points on her team with 11 goals and 15 assists in 24 games.  Howard has just 9 points in 22 games, though the team around her has not been as high-flying offensively this season.  Both players will add depth to an already-stacked roster.

Also making her senior team debut is 31-year-old Ann-Sophie Bettez, who has been widely regarded in the women's hockey community as a Team Canada roster snub for years.  With Les Canadiennes, she frequently sees ice time with Marie-Philip Poulin and Jill Saulnier as her linemates, and has 44 points (17G, 27A) in 24 CWHL games this season, second only to Poulin who has 49.  Bettez will likely continue to spend time on Poulin's wing during the Rivalry Series.  Montreal head coach Caroline Ouellette said of Bettez on February 2 in a postgame scrum in Brossard: "It's been a long time deserved. I think if you ask any player in the game, they'll tell you that she's one of the best, and I want to salute the new leadership at Hockey Canada [for giving] her a chance, because she's been the best in what is the best league in Canada, so she deserves a chance to skate with the best players, and she's earned it."  The new challenge of neutralizing Bettez and Poulin together will be no small task for Team USA.

Other players at forward are newer to the national team roster, having made their debuts at Four Nations.  The defense is trending younger, with players like Montreal's extremely formidable Lauriane Rougeau staying home to make way for dynamic players like Halli Krzyzaniak and Erin Ambrose.

In goal, there's really no bad choice among Shannon Szabados, Geneviève Lacasse, and Emerance Maschmeyer.  All are capable of stealing games, though they haven't had their best outings against Team USA in recent years.  Szabados is the lone NWHL player on Team Canada's roster and has filled Charline Labonté's skates nicely as the veteran go-to in net.  It will be interesting to see if each goalie gets a start in the exhibition (as it's a great test run for the Worlds) or if head coach Perry Pearn will lean on anyone in particular.

Maschmeyer is the hardest working goalie in pro women's hockey this season with over 1,100 minutes played so far this season with Les Canadiennes, posting 4 shutouts.  Her teammate Lacasse has on the other hand been used lightly in net, playing only 3 games this season with a 2-1 record.  Szabados leads the NWHL with a .944 save percentage.

Other than Szabados, the longest-tenured players on this roster are Marie-Philip Poulin and Rebecca Johnston, who have been with the senior team since 2009 and 2008, respectively.

Notably Team USA is bringing just two goaltenders to Team Canada's three, when it could have been an opportunity to add someone new into the mix or include the Beauts' Nicole Hensley, who was with the team in Pyeongchang.  (2018 shootout hero Maddie Rooney remains with her college team at Minnesota Duluth.)  Katie Burt makes her senior team debut, having previously been with Team USA in U18s.  The former BC Eagle has played the most minutes of any goaltender in the NWHL this season, with a 9-4-0 record and a .913 save percentage.  Alex Rigsby joined the Calgary Inferno this season and has a 12-2-1 record with 1 shutout and an 0.925 save percentage.

On the skater side, there are some familiar faces back that had been surprise exclusions from the Olympic roster, including Alex Carpenter.  Megan Bozek is also back after re-joining Team USA for Four Nations in November.  Michelle Picard returns having last played for the national team at the 2016 World Championships.

Buffalo's Savannah Harmon and Hayley Scamurra are making their Team USA debuts.  Scamurra leads the NWHL in points this season with 9 goals and 10 assists. Defender Harmon has proven to be a clutch player with 2 of her 3 goals this season being game winners.  Kacey Bellamy, Gigi Marvin, and Hilary Knight remain mainstays as the longest-tenured players on the roster.  All three played in the 2010 Olympics, and Marvin has been with the senior team since 2007.

Overall, Team USA brings reliability and physicality at forward. Hilary Knight (a power forward in the purest sense of the term) will likely see time ice time with Brianna Decker for the first time in awhile.  Knight has 8 goals and 8 assists in 22 games with Les Canadiennes de Montreal this season, while Decker has 12 goals and 11 assists with the Inferno.  The two have been known for punishing shifts together that lead to chippy goals.

At defense, the roster remains speedy and mobile in a way that could be especially dangerous on special teams, with Bozek and Bellamy racking up power play points this season in the CWHL with Markham and Calgary.  Marvin is second among defenders in the NWHL this season in scoring with 6 goals and 4 assists, though she often plays at forward as well.  Lee Stecklein's 1 goal and 7 assists are tied for third.

This will be head coach Bob Corkum's second appearance with the team, after first joining USA Hockey in this position last fall for the Four Nations Cup.

As usual, these teams are evenly matched with all-world players at every position.  Both teams have used similar strategies and approaches to building their rosters for the series, with a balance of veterans, regulars, and players making their debuts with their national teams.  If everyone is bringing their best, it should be a tight and exciting series.

Kirsten Whelan contributed to this report.