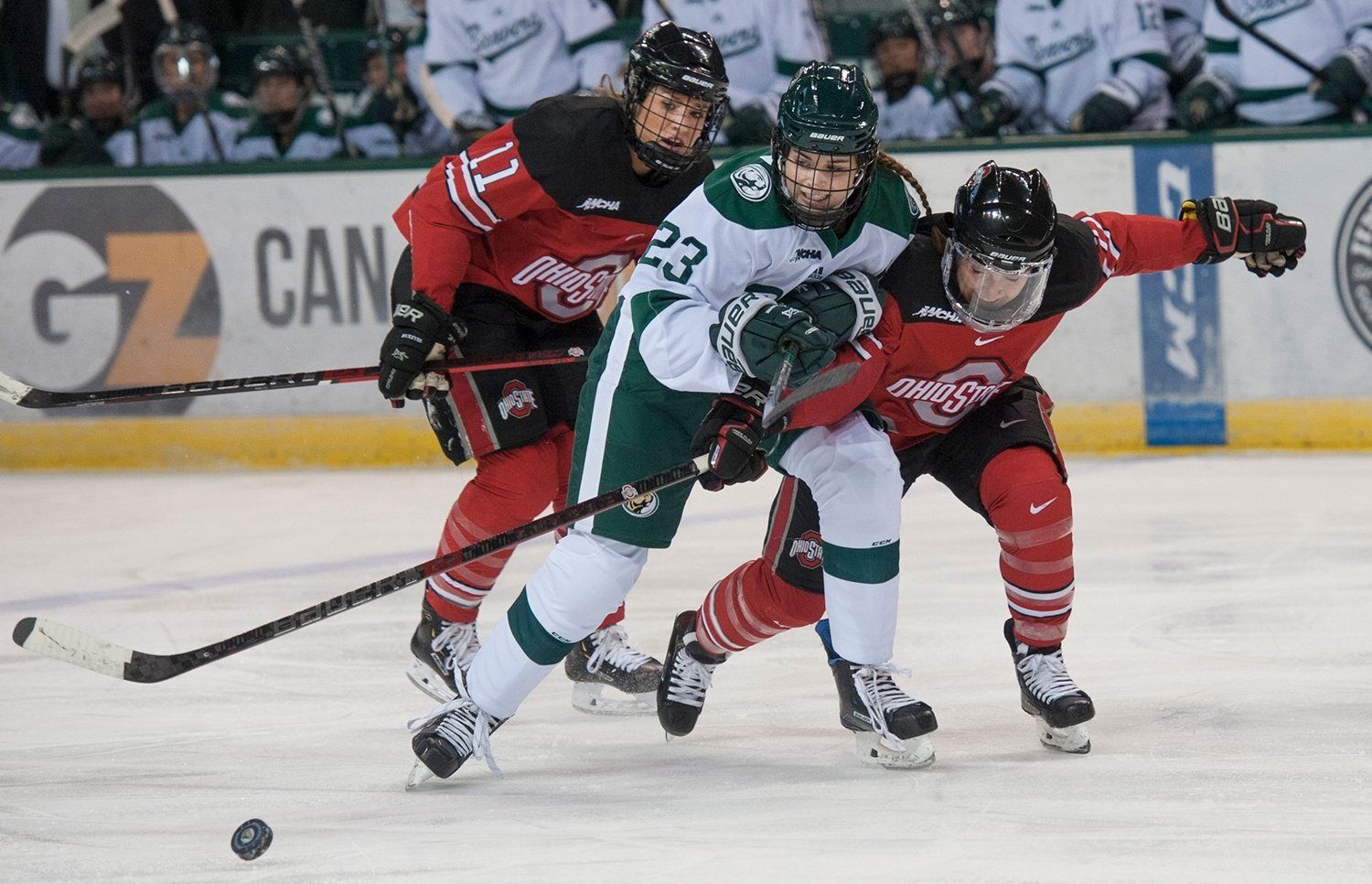 The Big Red are tied with Princeton atop the ECAC with Clarkson just a single point back. Cornell took a 3-1 win when these two teams met on December 1, but before that the Golden Knights had won give straight.

Clarkson is very good at home and have a 27-game win streak on their own ice, while Cornell is 7-1-5 on the road this season. Over at USCHO, I picked this game to end as a tie and it sure seems like that could be the case. The teams are very evenly matched in most statistical categories, are virtually tied in the standings and both teams are riding an eight-game win streak.

The Golden Knights boast three of the nation's top scorers in a potent top line. They average nearly four goals per game and are allowing 1.82 goals per game. Their defense isn't as strong as it has been in recent years, but they've got Kassidy Sauve in net and the offensive firepower to overcome the slightly more porous defense.

Cornell scores at a slightly slower pace, but also allows fewer goals. In fact, they come into the weekend  not having surrendered a goal in 171:57, which is the longest span of time it has gone without allowing a goal since the 2010-11 season. Marlène Boissonnault has been incredibly solid in net for the Big Red and leads the ECAC with a 1.66 goals against average.

Obviously Princeton will have something to say in the matter, but it'd be a good bet to say the winner of this one goes on to win the conference.

Watch: A paid stream will be available on FloHockey.

Bemidji State have been wreaking havoc all over the WCHA this season and causing headaches for teams that don't bring their best against them. They swept the Buckeyes back at the beginning of November and have beaten Wisconsin and Minnesota-Duluth in recent weeks. Ohio State has been very good at home, going 10-4 on their own ice. Bemidji will have their work cut out in hostile territory.

The Beavers are a particularly good defensive team and it's very difficult to play against them from behind. They take away shooting lanes, crowd the ice, and stifle teams once they have that lead. Blocked shots and stellar goaltending carried them in their upset of Wisconsin last week and they'll be looking to do the same in Columbus.

Ohio State needs to have a clean sheet this weekend in order to improve in the Pairwise. The Buckeyes' position is very precarious and they'll need to pick up every point they can to make their case for an at-large bid to the NCAA tournament.

Bemidji State will be looking to keep Emma Maltais and Tatum Skaggs to the outside. They'll look to clog the lanes and force long, outside shots that can be blocked.

Watch: Televised on NESN. A stream should also be available on ESPN+.

Both opening round games of the Beanpot were upsets, with the lower or unseeded team coming away with the win. Boston University responded to everything Northeastern put at them and then triumphed in the shootout. Harvard goalie Lindsay Reed had a career game and the Crimson put Boston College back on their heels to take game two. Now we have the Beanpot Final no one expected.

BU has one just a single Beanpot title, back in 1981 when they were still a club team. Harvard has won 13 Beanpots, the latest coming in 2015.

Boston University has one of the better scorers in the country in Jesse Compher. The Terriers had a rough start to the season, but have not let those early miscues define them. A sweep of Boston College to start December gave the Terriers confidence and they've lost just two games since then, going 9-2-3 and putting themselves in a position to be a part of the postseason.

Harvard has had a few seasons of late that have been out of character for the program, though wins like Tuesday's over Boston College show that the fight has not gone out of the Crimson. Reed has been a revelation for them in net, making them a team to reckon with every time they step on the ice.

The Beanpot is a big deal out east, and BU has definitely been the odd team out when it comes to titles. Winning a second, especially in a season where they had to mentally push to get where they are, would be very sweet for the Terriers.

↑Minnesota State defense –  The Mavericks are first in the country with 493 blocked shots and second with 1,055 saves. Goalie Abigail Levy has played the most minutes of any netminder and her five shutouts are second among all NCAA goaltenders.

↓Boston College – The Eagles won't play in the Beanpot final for the first time since 2012.

↑Minnesota Duluth senior Maddie Rooney – She tallied 81 saves against the Gophers in last weekend's two game series and had her sixth game against the in-state rivals where she had at least 40 saves.

↓Wisconsin – The Badgers dropped out of the top spot in the national rankings for the first time since October 22.

↑ECAC players –  The ECAC swept the national awards for January as Loren Gabel, Sarah Fillier, and Grace Harrison were honored as Player, Rookie, and Goalie of the Month, respectively

↑Wisconsin senior Annie Pankowski – She was named a finalist for the Hockey Humanitarian Award, presented annually to college hockey's finest citizen — a student-athlete who makes significant contributions not only to his or her team but also to the community at large through leadership in volunteerism. She is the only woman among this year's finalists.