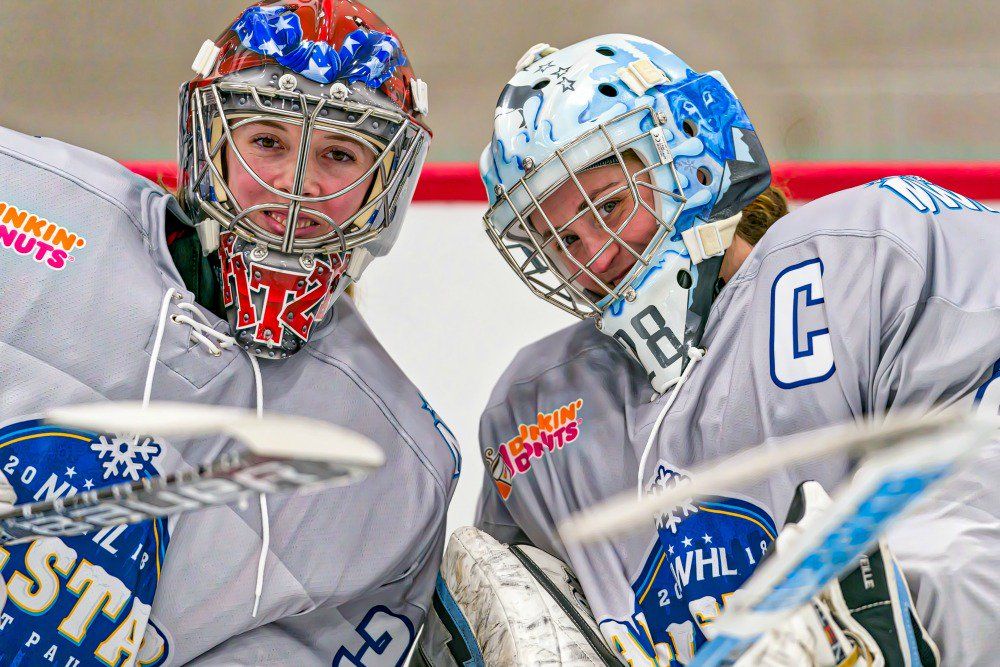 From the North Star State to the Queen City, Amanda Leveille has proven herself to be a spectacular goaltender in the National Women's Hockey League. After spending her first two professional seasons with the NWHL's Buffalo Beauts, Leveille went home to Minnesota, where she's been suiting up for the Whitecaps this season. The Kingston, Ontario native previously played for the Minnesota Golden Gophers in her college years.

The Whitecaps have largely depended on Leveille’s services in net this season – which isn’t exactly a new phenomenon for her. In Leveille’s rookie season in the NWHL, she split goaltending duties in Buffalo with Brianne McLaughlin and won the Isobel Cup. Her sophomore season saw her take the helm in Buffalo, appearing in 21 games. She went 14-6-0 with a 2.72 GAA.

This season, Leveille has played in all 10 games for the Whitecaps and helped them to a 7-3 record, tied for the top of the league standings.

Four of those games have come against her former team. The Whitecaps beat the Beauts 3-2 and 2-1 in their first tilts of the season, both in Minnesota. Leveille made 70 saves in the two wins.

When Leveille came home – to her second home, Buffalo, that is – she helped lead the Whitecaps to a split with the Beauts.

"I loved my time in Buffalo," Leveille said. "Anytime that I can come back here is really special."

Minnesota beat Buffalo 2-1 at KeyBank Center, home of the NHL's Buffalo Sabres, with Leveille stopping 33 of 34 shots faced. The Whitecaps dropped a 4-0 decision to them the next day at HARBORCENTER, but Leveille made 23 saves.

"We won the first game, and the second game didn’t go exactly how I planned. Nicole Hensley played unreal, and sometimes that happens. You run into a great goaltender, and they [the Beauts] have two of them. We'll just build on this and get better next time."

"Next time," as it is, comes sooner rather than later. The Whitecaps are on the road this coming weekend to return to NWHL action, facing the Boston Pride for a 7:30 PM Eastern puck drop on Saturday before visiting the Connecticut Whale at 3:00 PM Eastern Sunday. Overall, Minnesota will play four of their final six games on the road.

The Whitecaps most recently played a pair of exhibition games against Ohio State. They won both games, by scores of 3-2 and 3-1. Leveille split the net with Julie Friend and made 32 saves in the second win.

Playing in Minnesota, according to Leveille, has been "unreal."

"I mean, every game, we've sold out so far, which most Minnesotans expected because it's the State of Hockey," Leveille said. "It just adds another element to the game, when you walk out and there's little girls who want to high-five you and then you score, and the crowd is really into [it]. It's just really an awesome feeling to play in Minnesota in front of those fans."

Could the Whitecaps ever play a game at the Xcel Energy Center, home of the Minnesota Wild?

"Absolutely," Leveille said. "In the State of Hockey, I feel like… we could maybe not fill it up, but maybe fill up the bottom bowl. That would be kinda cool."

In heading to Minnesota, Leveille joined a largely already-established Whitecaps team. Though they hadn't played in the NWHL previously, the Whitecaps as an organization have been around since 2004. Many of their players have been with the team for years, building a framework for a strong team.

"A lot of the girls on the team have played with each other since they were little," Leveille said. "The chemistry on this team is something that I haven't really ever gotten to experience."

"It’s been really cool to meet all the people that I used to play against in the WCHA and now have them on my team," she added. "Everything about Minnesota has been good so far."

Leveille is, of course, referring to her time with the University of Minnesota. Between 2012 and 2016, she appeared in 116 games for the Gophers and registered a 1.18 GAA and .947 save percentage. She won three national championships, including a 3-1 championship win over Boston College in 2016.

On that Gophers team, Leveille played with many other NWHLers, including Hannah Brandt, Dani Cameranesi, Amanda Kessel, and Lee Stecklein. Among those on the BC team that year: Kaliya Johnson, Dana Trivigno, Haley Skarupa, and Katie Burt.

As the season wears on, the Whitecaps have continued to build off those relationships and stoke that chemistry.

"Off-ice chemistry really goes to on-ice chemistry," Leveille noted. "Normally, we're on top of teams, we're scoring first, and then we're bearing down and not giving them anything.”

Though the Whitecaps are atop the NWHL right now – and Leveille has played in every league game for them this season – there are still a handful of games left, and the standings remain up in the air. Leveille is also preparing for the upcoming NWHL All-Star Weekend in Nashville, her second straight All-Star appearance after playing in the game in Minnesota last year.

"We've just got to keep playing our hockey," Leveille said. "We're still pretty early in the season, and our goal is to win the Isobel Cup. Games like this [the 4-0 loss to Buffalo] are really opportunities for us to learn."