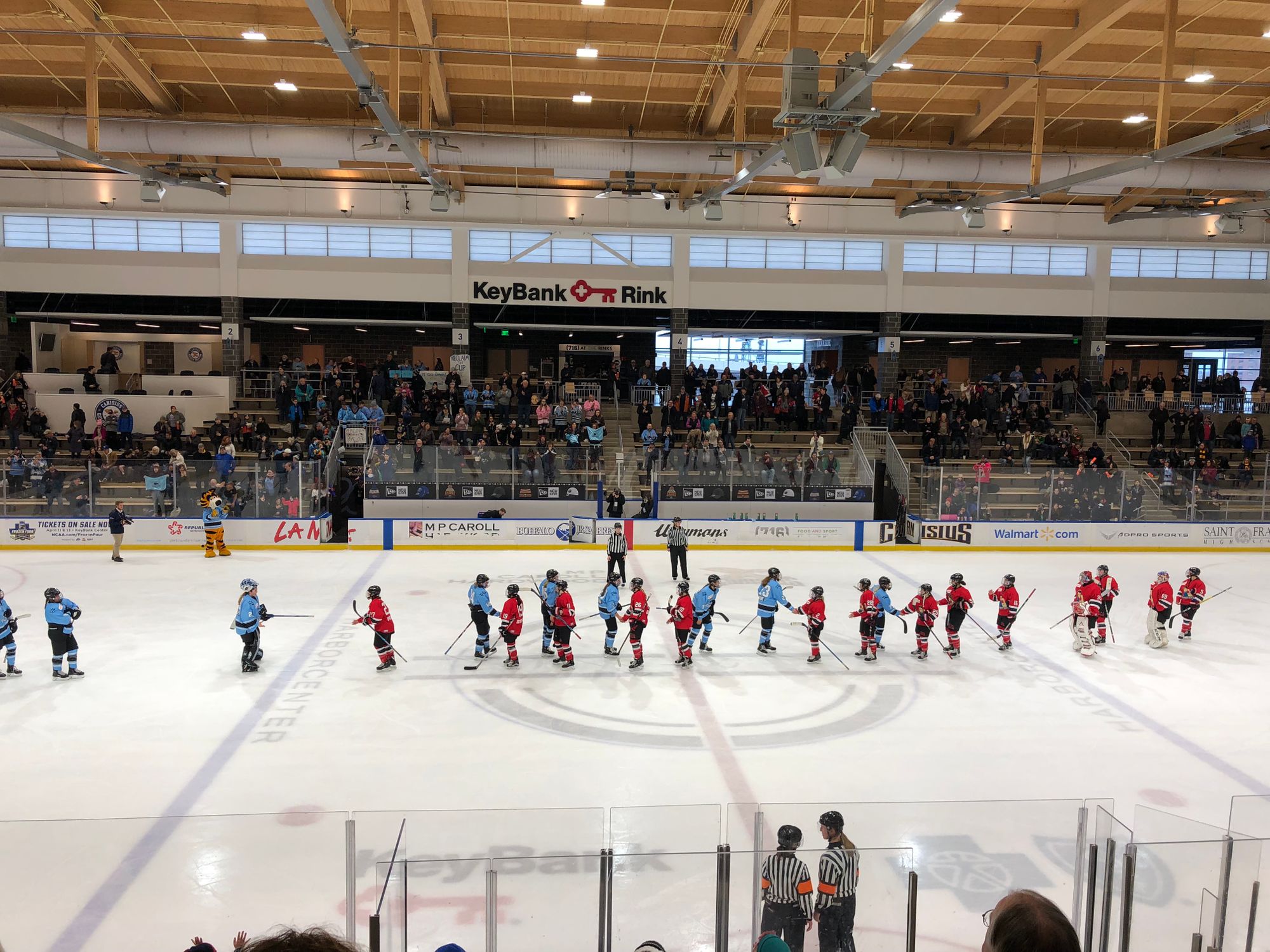 For the first time in league history, all five NWHL teams were active in league play in the same weekend. The Buffalo Beauts and Metropolitan Riveters met for the first time since the 2018 Isobel Cup championship game, while the Minnesota Whitecaps traveled the East Coast to face the Boston Pride and Connecticut Whale.

The Buffalo Beauts captured their third consecutive win on Saturday with a decisive 5-1 victory over the Metropolitan Riveters. The Riveters struggled early, getting very little zone time, but got on the board first. Madison Packer tipped a shot in front of the net to make it 1-0 Metro with 7:22 to play in the first period.

Just ten seconds later, however, the Beauts opened fire. Maddie Elia tied the game, ringing a shot off the post and into the met from the middle of the face-off circle to the left of Maria Sorokina. A short time later, Hayley Scamurra gave Buffalo the lead, getting Sorokina down on one side of the net and slapping it in the other side.

Those goals were followed by three more unanswered tallies, starting with another from Scamurra on the power-play less than a minute into the second period. Julianna Iafallo made it a 4-1 game, also on the power play, several minutes later.

At this point, the Riveters pulled Maria Sorokina in favor of Katie Fitzgerald. Sorokina allowed four goals on 11 shots faced.

With 13:35 to play in the second period, Sarah Casorso and Packer got tangled up. No punches were thrown, but both players received fighting majors and game misconducts. It was Casorso's final NWHL game, and a very fitting way for her career to end.

"Packer and I, we have a bit of history," Casorso said after the game. "There had been some friendly exchanges already in the game and I think that was just a bit of a boiling point."

"I kind of got her pinned against the boards there, and before I knew it was happening, my helmet was off and then it was over," she added. "I wouldn't call it a fight. It was more of a bit of a wrestle."

Casorso is referring to the hit she laid in the Isobel Cup Final that injured Packer's shoulder. Casorso earned 12 minutes of penalties on the play.

"When I looked at my team, they're all patting me, I stepped off the ice and it sunk in," Casorso said. "That was your last second on the ice. I got extremely emotional. I entered the dressing room and I was like, that's it. And then Shannon Szabados walked in and she goes 'Buddy, you're a legend!' Yeah, that was a legendary moment."

As the end of the second period grew near, the Beauts killed off a significant 5-on-3 and nearly scored shorthanded. The score remained 4-1 until the midway point of the third period. Once again, Buffalo capitalized on the power play, scoring 27 seconds into a penalty to Miye D'Oench.

Kelly Babstock scored her second goal of the season to finalize the 5-1 victory, and the Beauts held the Riveters to minimal zone time and no shots on goal in the first 15:55 of the third period. Nicole Hensley made 24 saves in the victory.

The Boston Pride scored five goals in the first period and held on through the final 40 minutes en route to a narrow 5-4 win over the Minnesota Whitecaps on Saturday night, in front of a sold-out crowd at Warrior Ice Arena.

Kendall Coyne Schofield opened the scoring for Minnesota just 3:25 in. The Pride then received goals from Kaleigh Fratkin and Amanda Pelkey just minutes later to tie the game and take the lead. Fratkin's goal came on a shot from near the blue line, while Pelkey scored from a nice angle to Amanda Leveille's right side.

Although Amy Menke would tie the game less than two minutes later, the Pride charged back for three goals in just under four and a half minutes in the second half of the opening period. Jillian Dempsey, McKenna Brand, and Denisa Křížová all scored, and the Pride held a 5-2 lead after twenty minutes of play. Dempsey gave Boston the lead once again with a goal from the middle of the faceoff circle to Leveille's right, while both Brand and Křížová scored from down low to Leveille's left and right sides, respectively.

Amy Schlagel and Jonna Curtis added goals for the Whitecaps in the final two periods, but ultimately, the Pride held on for the win. Katie Burt had 26 saves in the victory, while Leveille had 20 saves for the Whitecaps.

Nine different Pride players registered at least a point in the win, including Haley Skarupa, who had two assists, Dempsey (one goal, one assist) and Gigi Marvin (one assist).

Less than 24 hours after falling to the Pride, and one bus ride later, the Whitecaps returned to action against the Whale on Sunday afternoon.

Jonna Curtis opened the scoring, picking up the puck behind the play and skating in on the Whale net before putting it behind Meeri Räisänen nearly seven minutes in.

Minnesota took a 2-0 lead a few minutes later on the power play. Amy Menke brought the puck into the zone and passed it Hannah Brandt at center ice, who slapped it into the net.

Michele Löwenhielm put the Whale on the board with under five minutes to play in the first period, getting a cross-ice feed from Emily Fluke and slamming it in from between the face-off circles.

The scoring wasn't quite done for the period, though. After cycling the puck, the Whitecaps went ahead 3-1 on a snipe from the blue line from Amanda Boulier.

Menke scored her second goal – and fifth point – of the weekend midway through the second period. Menke took advantage of her speed, got Räisänen on her side amid bodies in front of the net and squeezed the puck in to make it 4-1 Minnesota.

Connecticut had several good chances in the middle frame, including a near-goal in the dying seconds, but the Whitecaps remained up by three goals after forty minutes.

Leveille got a little break with under five minutes to play in regulation, as the Whitecaps elected to give Sydney Rossman some playing time against her former team. It was Rossman's first action of the season and first as a Whitecap.

With the win, Minnesota ended a two-game losing streak. The Whale, meanwhile, have lost four consecutive games dating back to December 8.

Next weekend will see the Whale travel to Minnesota to face the Whitecaps for a pair of games. Elsewhere, the Pride and Riveters face off in New Jersey on Sunday afternoon. The Beauts are inactive.