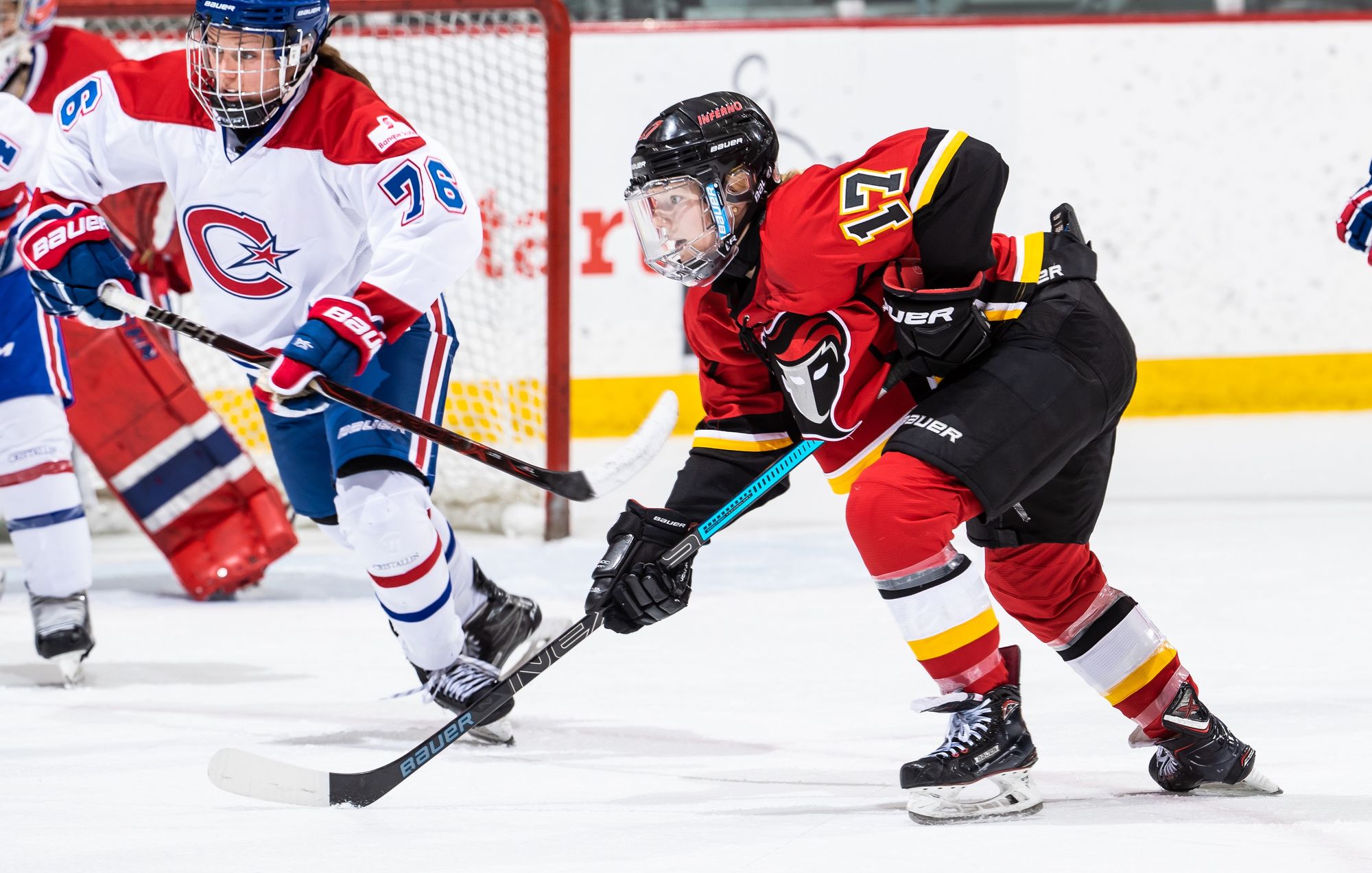 The Toronto Furies and Markham Thunder split a home-and-home this weekend, while the Calgary Inferno swept Les Canadiennes de Montréal to secure their spot at the top of the standings.

The two GTA teams played a home-and-home series this weekend, with Markham hosting the Saturday contest and the Furies hosting Sunday's outreach game in Oakville, Ontario.

Jamie Lee Rattray opened Saturday's scoring 4:02 into the game, and Kristen Richards doubled the advantage with a power play marker ten minutes later. Natalie Spooner then got Toronto on the board with a power play goal of her own three minutes after that.

The second period was even until the dying minutes, when Victoria Bach netted a rebound from the slot and Laura Fortino beat Elaine Chuli high just 54 seconds apart to put Markham up 4-1.

Sarah Nurse scored a power play goal from the top of the slot to start the third, but Laura Stacey replied with a power play tally of her own five minutes afterwards for a 5-2 final.

The Thunder were 2-for-5 with the skater advantage and 2-for-4 on the penalty kill.

Mackenzie MacNeil struck first on Sunday with her first career goal, a power play goal off a scramble in the crease. Spooner then made it 2-0 for the Furies, but Kelly Gribbons got one back for Markham just 37 seconds later.

Bach tied things up with the lone goal of the second period, which saw a combined 34 penalty minutes assessed (including a pair of 10-minute misconducts).

Early in the third period, Nurse beat the defender to collect the puck in the neutral zone and score a beautiful shorthanded breakaway goal to restore Toronto's lead, but Bach scored on a 5-on-3 at 15:12 and forced overtime.

Nurse made quick work of the extra session, sniping a shot from the high slot 57 seconds in to give the Furies the 4-3 win.

Toronto was 2-for-6 on the power play and killed off nine of ten penalties.

Montreal landed in Calgary without a head coach; the team left with no points and injuries to two key players. Three of Les Canadiennes' top six forwards are currently injured, with two of those injuries sustained during Sunday's game.

Kaitlin Willoughby opened Saturday's scoring with her first CWHL goal, and Rebecca Johnston followed it up less than two minutes later. Brigette Lacquette added another goal at 18:53 to put the Inferno up 3-0 after one.

Montreal came out strong for the second period, with Mélodie Daoust and Ann-Sophie Bettez scoring to bring Les Canadiennes within one.

Johnston scored shorthanded just 44 seconds into the third period and it proved to be the last goal of the game, for a 4-2 final score.

Calgary was 0-for-1 on the power play and more than perfect on two penalty kills.

Alex Rigsby turned away 19 of 21 shots, while Emerance Maschmeyer saved 27 of 31.

On Sunday it was Montreal that came out of the gates soaring, as Bettez and Marie-Philip Poulin scored the only goals of the first period.

The Inferno tied it up in the second, thanks to a shorthanded effort from Halli Krzyzaniak in the opening minutes and a goal by Zoe Hickel at the midway point. Katia Clément-Heydra went down after a hard hit; Les Canadiennes have confirmed that she will miss at least one week with an upper body injury.

Late in the third period, Mélodie Daoust collided knee-on-knee with an Inferno defender and was helped off without putting any weight on her left knee. She'll be out for at least six to nine weeks, per the team. To add insult to (literal) injury, Turnbull netted the game-winner with 26 seconds remaining just as the teams seemed poised to go to overtime.

Calgary was 0-for-4 on the power play and 2-for-2 on the penalty kill while adding a shorthanded goal.