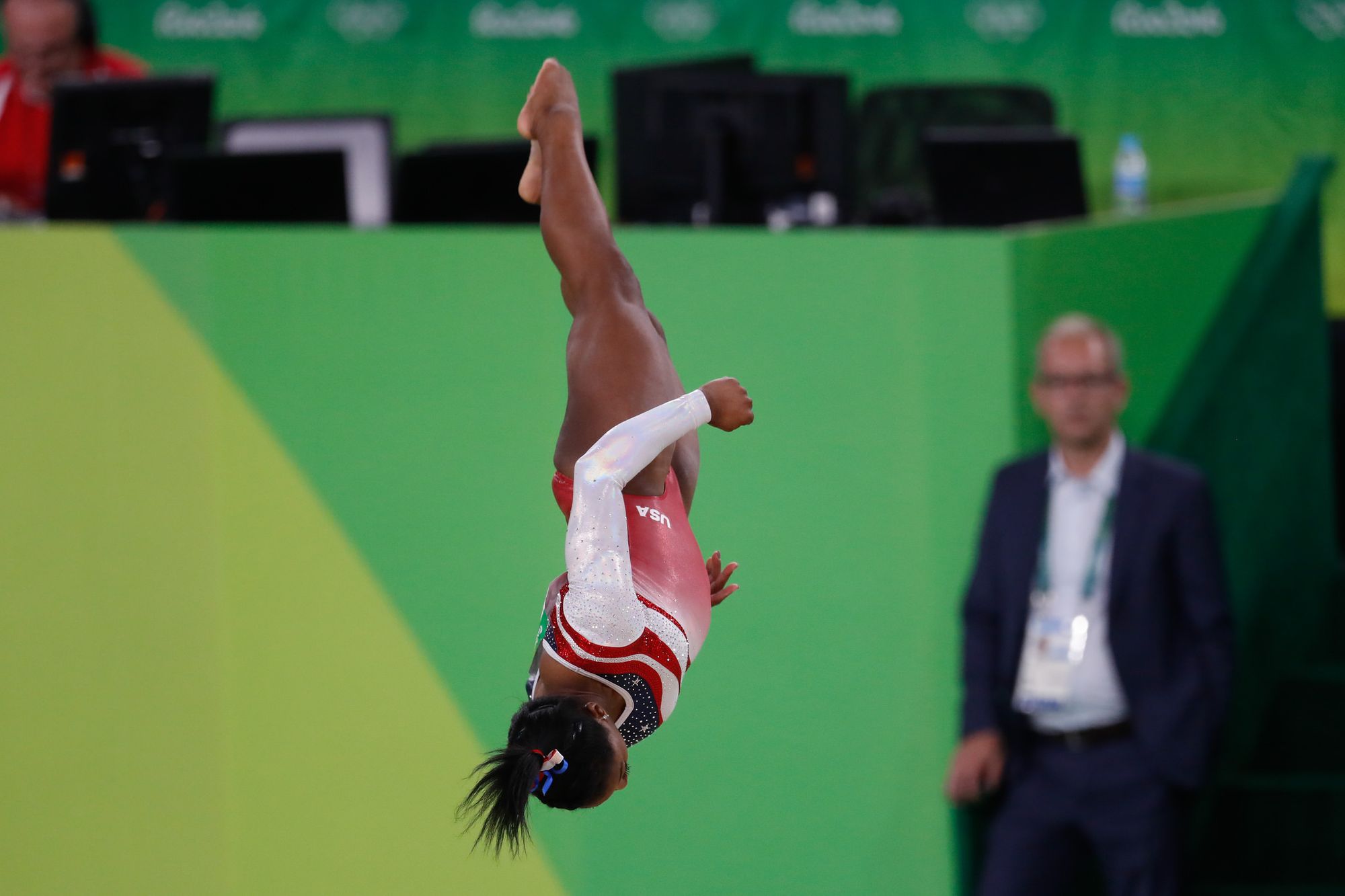 Just past 12:00 AM local time on the morning of women's qualifiers at the 2018 World Artistic Gymnastics Championships in Doha, Qatar, the best gymnast in the world wasn't in bed dreaming sweet dreams of yet another gold medal. She was in a nearby emergency room, courtesy of a kidney stone she later nicknamed "The Doha Pearl."

The next day she successfully landed a vault no other woman has ever competed internationally – a Yurchenko half-on, front layout flip with double twist off that has a difficulty score of 6.4.  In gymnastics, that's incredibly high. Because new elements are named after the first gymnast to successfully compete them internationally, this vault will now be known as "the Biles." It is her second eponymous element; the first is a double layout half-out, a G-level floor exercise skill.

Five days later, the "pearl" still in her system, Biles became the first female gymnast ever to win four all-around gold medals. Her latest all-around gold came with the highest margin of victory ever recorded at a women's gymnastics world championship, 1.693 points (her total score was 57.491). Over the following two days, the individual event medals she captured made her the first woman in 31 years (the last was Elena Shushunova in 1987) to medal in each event at a world championship, and the first American woman to do so.

To put it in layman's terms: Biles is the undisputed G.O.A.T.

When Worlds began, Biles had not yet been back in the gym a full year. Her four-event score in qualifiers, 60.965 points, was higher than the 60.100 she earned on the first day of the U.S. National Championships in August. Perhaps more notably, that 60.100 was the first over-60 score achieved since she won the all-around title in the 2016 Rio Olympics.

Biles is light-years ahead of everyone else in women's gymnastics. This year's Worlds proved that remains true even when she is imperfect.

The last year has been, to put it mildly, a chaotic mess for USA Gymnastics. For survivors of former USA Gymnastics national team doctor Larry Nassar (a list that includes Biles, as she revealed in January 2018), it was a year full of reliving trauma, and doing so largely in the public eye. For Biles, it was also a year of returning to training, returning to old habits, returning to form, and, in the end, returning to the top of the podium.

After watching her epic journey, one that reached astronomical heights in Doha last month, it would be easy to take Biles's dominance for granted. On the surface, her career has been nothing but gold medals and new records since her 2013 World Championships all-around win. Beneath the surface, however, Biles is all too human – a fact that makes her dominance that much more impressive.

According to the Olympic Channel, although Biles officially returned to training last November she "would quit every three days." She was still struggling mentally in May, refusing to attempt skills on the balance beam or tumble backwards. Two competitions loomed: the U.S. Classic in July and U.S. National Championships in August.

With the help of her parents and coaches Laurent and Cecile Landi, she figured it out.

Execution-wise, Biles's performance in Doha was far from her best. To wit: she fell twice in the all-around competition. For any other gymnast one fall would've been the end of her medal hopes. Two would've been an unmitigated disaster. And yet, thanks to the current scoring system (and thanks in no small part to her unreal gymnastics abilities) Biles walked away with her record-setting fourth all-around gold.

The current gymnastics scoring system, which replaced the "perfect 10" system in 2006, is open-ended and prizes difficulty. It doesn't require gymnasts to be perfect – rather, it balances an execution score (taken out of 10 and determined by literal execution of elements, technique, and artistry) with a difficulty score determined by the complexity of skills a gymnast completes in their routine. It rewards gymnasts who are creative, who push the boundaries of the sport, while still alternately rewarding or penalizing for execution depending on the gymnast's performance.

For every-four-years gymnastics fans, or those who aren't really fans at all but have heard of Biles anyway, execution typically isn't a problem for her. She is frequently sublime – her body perfectly straight, legs zipped together without a millimeter of sunlight between them, toes beautifully pointed. Most of her elements in Doha showcased this. But in two specific incidents in the all-around – once on her namesake vault, which she sat, and once when she fell off the balance beam – she faltered.

Was it because she's only been back in the gym for a year? Was it because she was still dealing with her kidney stone, a condition known to be quite painful, with the only pain medication available that which doesn't risk breaking anti-doping rules? Was it simply because athlete – even the very best – have bad days now and then?

The reasons don't matter. Biles won anyway. In a performance she described to media as "capable" and a "bomb", Biles showed that even on her worst days, she laps the competition.

Whether Biles should have the kind of room to make the mistakes she did and still win by a record-setting margin is another conversation entirely. On the uneven bars, floor exercise, and balance beam there are ample opportunities for a judge to deduct points for execution. Vault is the outlier, as there is only the one skill for the judges to observe and so only one opportunity for deduction. Many in the gymnastics world argue that, for this reason, deductions on vault should be higher than on other apparatuses.

Until that changes, however, Biles's difficulty score on vault is high enough to allow her to fall and still medal on the event – and that's with her "downgraded" vault, the Cheng, and not the Biles. (Yes, gym fans, that's right. A Cheng can officially be called a downgrade. If you're Simone Biles.)

No matter your opinion on the scoring system and execution deductions, however, one thing remains true: on the whole, Biles is competing more difficult routines than anyone else and that sort of drive and creativity should be recognized and rewarded.

Just How Dominant is Biles?

In the press conference after the all-around competition, AA silver medalist Mai Murakami said, "When Simone fell twice I wasn't thinking I could win. I was thinking... Simone can fall?!"

That reaction was echoed by most of the gymternet (that's "gymnastics internet" for those of you not used to the portmanteau).

Media coverage of Biles's accomplishments has, for the most part, accurately portrayed just how dominant she is. Mainstream media has, it seems, done so to the point that even many fans who don't watch gymnastics in non-Olympic years felt that same combination of shock when Biles fell in the all-around and the feeling of "oh, of course" when she won anyway.

One thing media could do better, however, is portraying the extent to which Biles is the greatest. Not only is she the best gymnast we have seen or will see in our lifetimes, one could argue that she is the greatest athlete in all of sports.
That argument might include facts such as:

Some people might argue that, due to his longevity, Michael Phelps outstrips Biles when it comes to the title of Overall Sports G.O.A.T. You can't determine that title by straight-up medal count, however. Women's gymnastics has fewer events and fewer opportunities to medal than swimming. You have to look closer.

In Michael Phelps's best Olympics (Beijing in 2008), he won eight out of 17 available medals, for a total of 47 percent. In Rio in 2016, Biles's only Olympic Games so far, she took home five of six available medals, or 83 percent. Four of those five medals were gold. On top of that, Michael Phelps didn't swim twice as many laps as the men he competes against, and he didn't swim a more difficult stroke in the same race.

Phelps competed against his peers and beat them soundly.

Biles has no peers.