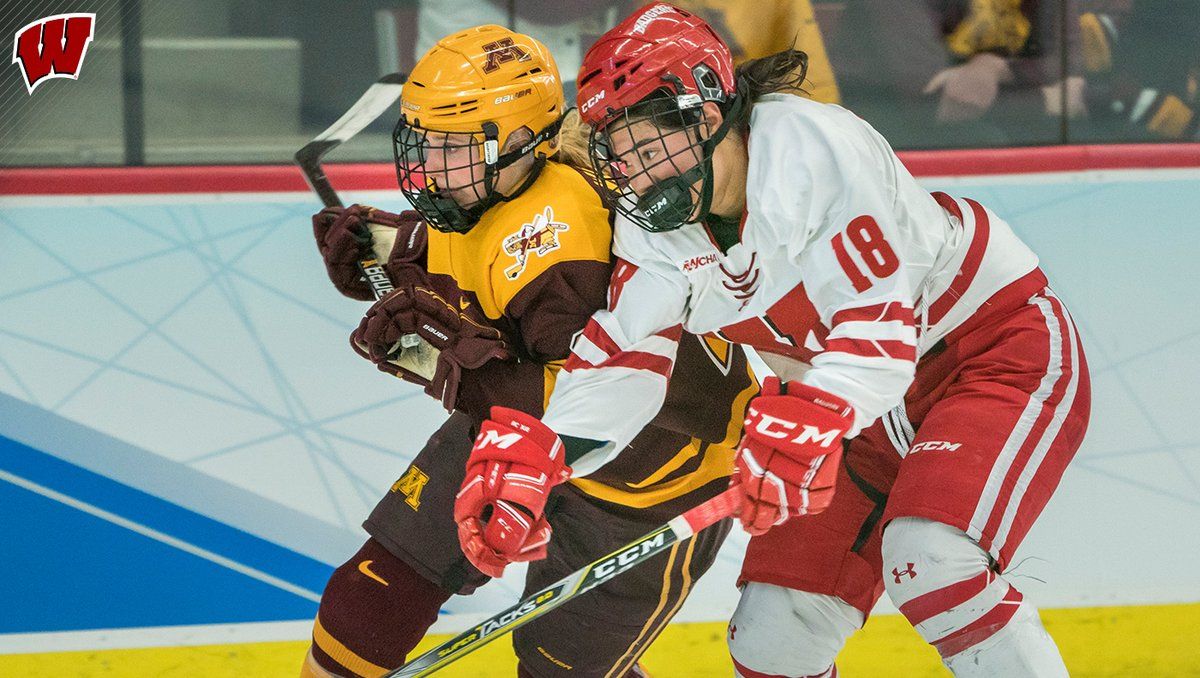 Saturday and Sunday at 2:00 PM Central

Watch: The games will be available through a paid stream on FloHockey and also through BTN. You can listen to a free streaming radio broadcast here.

Last year, Wisconsin completed their first-ever regular-season sweep of the Gophers. Minnesota defeated the Badgers in the WCHA tournament championship game, which the Gophers needed to earn a berth into the NCAA tournament. What they got for their efforts was a return trip to Madison for the NCAA quarterfinal, where the Badgers won 4-0.

Both games are already sold out and the Badgers are riding a 35-game home unbeaten streak. I don't believe Wisconsin will sweep the season against Minnesota again this year, but I have a feeling they may be able to hold serve at home.

The Gophers will be looking for their top line of Amy Potomak, Kelly Pannek, and Sarah Potomak to get moving a bit more. They've been perfectly okay so far, but I think we all expected that line to be beyond compare. We're probably reaching the end of when it makes sense to say "It's still early," but I don't think anyone writing up a game plan for the Gophers was expecting Nicole Schammel to be the scoring leader.

A big key will be on special teams. The Badgers were not great on the power play last year, but have improved significantly already. They're averaging a power-play goal per game over the first four weeks. Meanwhile, the Gophers have been very bad on the penalty kill – as in, one of the worst teams in the country. And they're also not scoring at the clip they'd like with the extra attacker. Gopher/Badger games are always physical, so team discipline and special team play is likely to make a big difference in these games.

Watch: A free stream of the games is available via ESPN+.

The St. Lawrence Saints are currently 3-4-1, but that record doesn't accurately tell the story of their season. They've played six overtime games and three of their losses are in one-goal, overtime games. They came out with a big win last weekend over Clarkson (the defending national champs' first loss of the season). Boston College needed two spectacular plays to take them down in the extra frame. As the season goes on, we're seeing growth from the Saints, and if they can find that little bit extra to win those close games, they're going to be a team to keep an eye on.

Ohio State is coming off a big weekend split with Minnesota. They've also split a series with Colgate so far this season. It's clear last season was no fluke and the Buckeyes are a solid team. They have been starting a rookie goalie in Andrea Braendli who has proven to be strong in the net for them. A lot of their success will continue to ride on how she plays.

Sophomore Emma Maltais has been a breakout star for the Buckeyes and she leads the team in scoring. Last year's WCHA Rookie of the Year has a great shot and eye for the goal.

Watch: It appears there will be a free stream on Maine's website.

Maine is a team that surprised folks last season, finishing third when they were picked to be near the bottom of Hockey East. Fifth-year coach Richard Reichenbach has had success recruiting players from Europe, as I detailed last week, to create a mature, potent, puck-possession squad that wears down opponents and works extremely well together.

Despite an amazing year last season, the Black Bears still couldn't figure out Boston College, who they lost to by a combined score of 15-3 over their three conference meetings last season.

Boston College is a team that looked terrifying on paper heading into this season, but the Eagles seem to have lost some of the offensive oomph that was a hallmark of their success last season. It's unlikely we'll see such high scoring this time around. The game will serve as a good measuring stick for Maine in determining how they're going to measure up to the top of Hockey East this season.

↑Brown freshman Lizzy Gross – She scored her first collegiate goal on Saturday, which would be notable enough, but she also tallied a hat trick in that game and followed that up with a goal and two assists in the Bears' come-from-behind win over Connecticut on Sunday. She was named ECAC Rookie of the Week for the effort.

↓Clarkson – The defending national champions lost their first game of the season, a close 4-3 overtime defeat at the hands of St. Lawrence. They dropped out of the top spot in the rankings

↑Wisconsin's Sophie Shirley – The freshman was named WCHA Rookie of the Week and NCAA Third Star of the Week after tallying four points against Princeton. She had the game-winning goals in both Badger wins this weekend.

↑Brown – The Bears won two games all of last season, but have opened up this year winning three-in-a-row, something they haven't done in at least the past ten seasons.