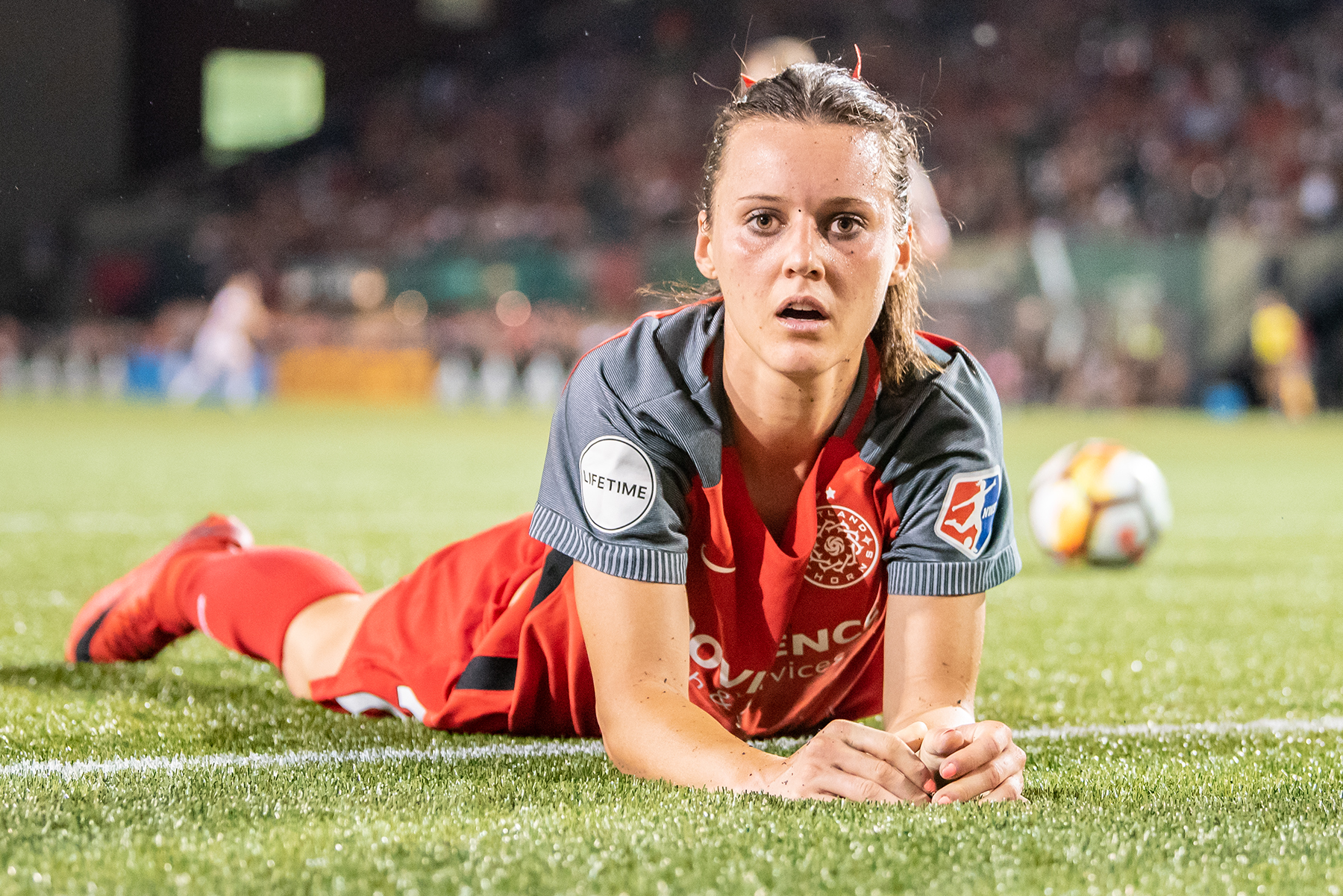 With the league scrambling frantically toward the international break, this jam-packed week was the most bizarre of the season, replete with overly physical play, appalling officiating, and how-did-she-do-that goalkeeping errors. More quick summaries so you don't have to be here all day. Let's go:

A predictably bleak day for the Spirit in North Carolina. After a dumb goalmouth scramble in the 12th minute led to a goal for Debinha, the Courage toyed with the visitors the way a cat plays with a mouse before eating it. So often with this Courage side, you get the sense they could be winning by six at any moment, if they chose to. A 60th-minute goal by Jessica McDonald, facilitated by a bad giveaway by Estelle Johnson, was the final blow.

In retrospect, my recommendation last week to keep an eye on the Seattle-Utah game (see below) looks completely stupid. This game, between a deeply, often entertainingly flawed Orlando side and the never-say-die Dash, the true people's team of 2018, was always going to be the fun one on the midweek slate. And boy oh boy, it didn't let us down.

Rachel Daly kicked off the scoring in the 17th minute, five minutes after a two-hour weather delay ended. After Ashlyn Harris handed her a second on a platter shortly after halftime, Orlando scrambled for a comeback. Sydney Leroux pulled one back but the Pride couldn't quite put away another of their many chances.

Then in the 94th minute, everything happened at once.

First, Daly scored her third of the night on a breakaway. After some prognosticating, that goal was waved offside. Immediately thereafter, Marta -- who had been spotted not long before dropping between the centerbacks in a desperate bid to prevent another goal -- shoved Daly in the face for the long-awaited first red of the season.

If you had Marta --that Marta!-- picking up the first red of the year... well, definitely don't congratulate yourself, because that would have been a ridiculous prediction. As Marta trudged off the field contemplating how life led her to this place, Thembi Kgatlana got her first goal of the season on another breakaway.

Yet another game got way out of hand when the ref failed to rein in physical play. Gunny Jonsdottir, in particular, couldn't catch a break: in just the first half, she got hip-checked in the head by Theresa Nielsen and kicked square in the stomach by Allie Long. The yellows flew, but haphazardly. Long picked up a card for the aforementioned kick; in an utterly baffling call, so did Rachel Corsie, for being run into by Adriana Leon. Jonsdottir got one of her own for colliding with Long on what looked like a 50-50 header.

Yet for all that, the difference was ultimately a defensive mistake, as Megan Rapinoe got loose at the far post on a corner kick and headed one in.

As if in answer to the Thorns' beatdown against Utah last week, North Carolina got the second 4-0 win of the season at Sky Blue. After a couple early looks by the home team, North Carolina grabbed hold of the game and didn't let go. Abby Erceg scored her second of the season in the 15th minute after some truly abysmal marking on a set piece. Lynn Williams got a second-half hat trick. No surprises here.

By the end of this one, Laura Harvey had had it absolutely up to here and held nothing back post-game, looking utterly despondent as she ticked off a litany of complaint (some completely justified, some less so) against the officials:

“It’s just every single game something happens that changes the dynamic of the game." pic.twitter.com/ibArhsaxWj

After the USWNT's second-choice keeper fumbled yet another routine save to put the Royals on the board in the eighth minute, Orlando earned a penalty when Jonsdottir bear-hugged Alanna Kennedy from behind during a corner kick. Alex Morgan put her spot kick away. Early in the second half, Kristen Edmonds chipped Abby Smith for the go-ahead goal. A demoralized Utah side couldn't mount a comeback.

This was the second game in two weeks where a serious-looking injury was the main story -- and this one ended with a Red Stars player in the hospital.

In the 35th minute, Steph Catley slammed Arin Gilliland in the air as they both went up for an aerial ball, and Gilliland collapsed holding her neck. She was eventually stretchered off the field with a suspected cervical spine injury. That the x-rays later showed no damage to her spine doesn't make this incident much less damning for the officials in the NWSL, who routinely let games spiral out of control. Players will play right up to where refs draw the line, and if refs don't start drawing the line much, much earlier, more serious injuries are going to happen.

Oh, and Sam Kerr scored a goal in the 87th minute after Michelle Betos cleared a ball directly to Yuki Nagasato.

Portland dominated a game marred by strange goalkeeping mistakes and missed calls on both sides. Lindsey Horan scored two in the first half thanks to slip-ups by Jane Campbell -- one a header on an Emily Sonnett service that Campbell ran off her line to claim, but missed, the second a tap-in after the Houston keeper failed to catch a simple lobbed ball in the goal area.

Kealia Ohai got one back in the 36th minute after A.D. Franch made a mistake of her own, deflecting a low cross straight into the Houston forward. A few minutes later, Houston probably deserved a penalty when Franch accidentally cleared a ball into Rachel Daly's face and then bodied her off the ball as she was about to score.

Ana-Maria Crnogorcevic's goal in the second half wrapped up the scoring, but not the excitement. A 70th-minute effort by Hayley Raso was waved offside late. In response, Crnogorcevic fulfilled my wildest dreams, drawing a rectangle -- unmistakably the universal "VAR" symbol -- in the air not once, but TWICE. The video evidence is less clear, but I think I also glimpsed Tobin Heath and Lindsey Horan make the sign.

I have been waiting for an NWSL player to do this all season. It's a fitting end to a week that was nothing so much as an indictment of PRO: the players are so fed up with the officiating that they're demanding refs use a mechanism that doesn't even exist in the league. I feel like anything can happen now. Players are going to start tucking their own cards into their socks and awarding them to refs. Somebody's going to punch an official. Hopefully, things change, and nobody else gets hurt.

This is a much sparser week, with just four games on the docket. With USWNT players expected to be in camp ahead of Tournament of Nations, some unexpected results could be in store -- in particular, Utah will be looking to steal three points against North Carolina, who stand to lose a lot of their players to camp.