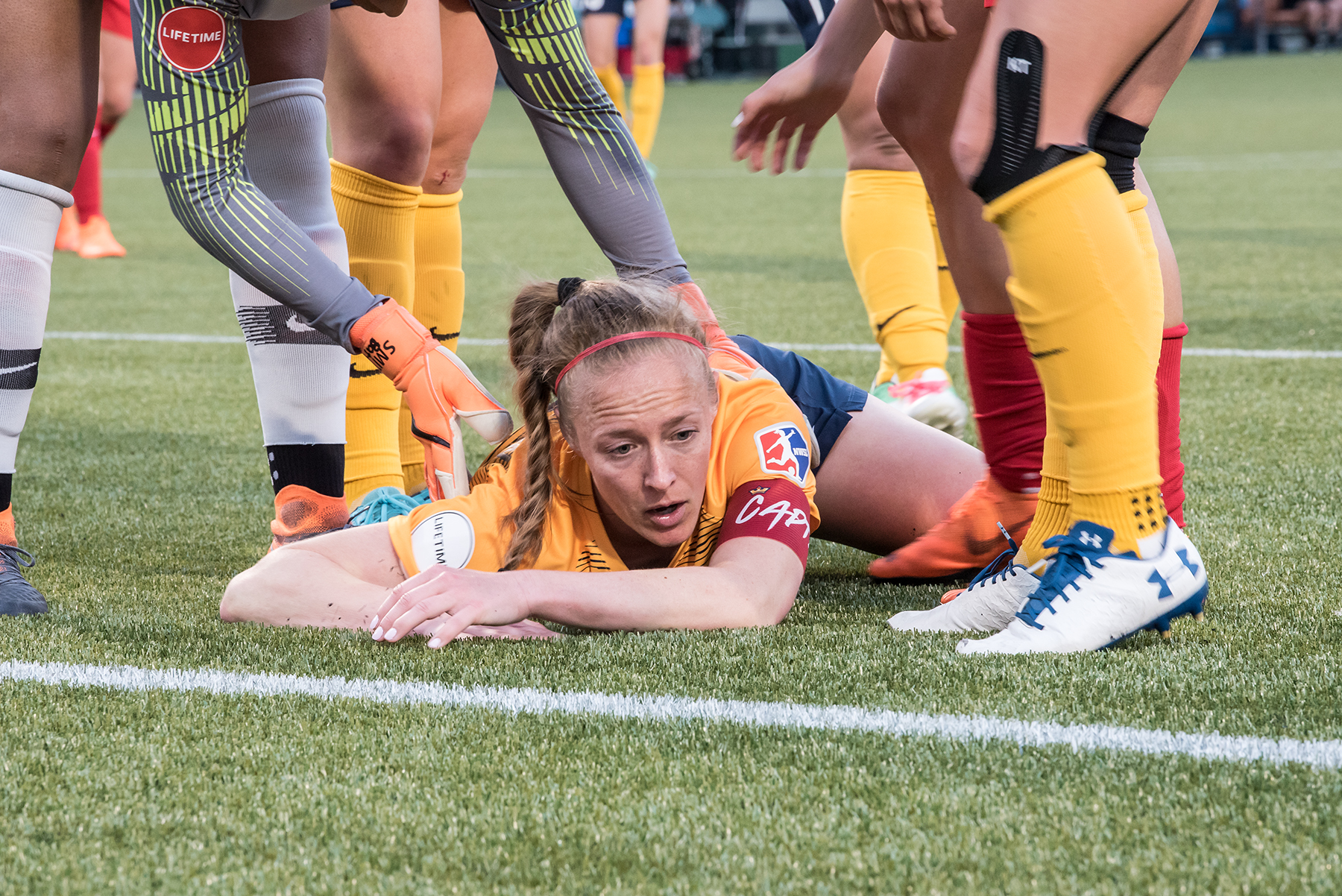 This week in the NWSL represented the last week of an old world, as the latest megatrade promises to keep things interesting in the second half of the season. Said trade brought Utah -- a team sorely in need of a reliable scoring threat -- one of the biggest offensive threats in the world, in Christen Press. The Dash, meanwhile, got their money's worth in exchange for Press's rights, bringing Sofia Huerta and Taylor Comeau to Houston -- a move that may add just enough quality to their roster to make an already better-than-expected team a real playoff contender.

Change is also afoot in Portland and Chicago, as both of those teams are getting multiple key players back from injury: Emily Sonnett and A.D. Franch for the Thorns, and Casey Short and Vanessa DiBernardo for the Red Stars.

With just five points separating the second- through sixth-place teams, and three of those teams tied at 19 points, this is probably the most closely-contested NWSL season yet, and things are only going to get wilder.

The week's NWSL action kicked off in Houston, where the Portland Thorns found their best-ever result at BBVA Compass Stadium with a 3-1 win over the Dash. As Tobin Heath, Emily Sonnett, and Adrianna Franch all made their returns from injury for Portland, Houston started all three of their new signings, with Taylor Comeau at right back, Sofia Huerta in the number 10, and Clare Polkinghorne (typically a center back) starting as a defensive midfielder.

Portland got on the board early with an eighth-minute goal by Tobin Heath. Christine Sinclair, making her 100th appearance for her club of six seasons, played a through ball in toward Ana-Maria Crnogorcevic and Heath, who were making runs into the Houston box. Crnogorcevic cleverly dummied the ball and let it roll on to Heath, who was one-on-one with Jane Campbell and slotted it home.

Houston equalized a few minutes later, as Huerta capitalized on a miscommunication between Emily Sonnett and Franch, snatching up a loose ball a couple yards shy of the goal line and tapping it home. Portland's defensive corps, playing with all five preferred starters for the first time this season, frequently looked out of step, and Huerta's goal wasn't to be the last chance Houston got due to that rustiness.

Good luck on the defensive end ultimately kept Portland from going down a goal, however, and they put away a second in the 33rd minute -- a weird one by Crnogorcevic which she headed home when Campbell couldn't get a grip on an initial effort. An 83rd-minute goal by Sinclair sealed the deal: Houston's defense gave the captain space at the top of the box and she sent in a dipping shot that slipped past Campbell's fingertips as she was scrambling back to the goal line.

This match wasn't quite as lopsided as the scoreline suggests, not unlike North Carolina's last 4-1 road win, against the Thorns a few weeks ago. That said, though, Seattle can't hide from the fact that they conceded four goals at home, several of them on serious defensive errors.

North Carolina pressured the Reign relentlessly in the opening minutes of the game, throwing three or four players at the likes of Megan Rapinoe and Elizabeth Addo any time they were on the ball. After the Courage wasted an early chance, with Lydia Williams saving a Lynn Williams penalty kick, though, Seattle started to work their way into the game, finding some connections between Rapinoe, Addo, and Jodie Taylor to work their way into dangerous areas. In the 18th minute, they got on the board when Katelyn Rowland blocked a Rapinoe free kick to the near post, and Megan Oyster pounced on the loose ball and hammered it into the top of the net.

For the next ten minutes or so, the Reign were in it. Allie Long scored a second that was waved offside in the 23rd minute and more looked to be coming.

As Seattle struggled to find their final shot, though, the clinic in why North Carolina is comfortably on top of the league began. In the 27th minute, Jaelene "personal reasons" Hinkle beat Alyssa Kleiner to send a cross to the far post; Williams beat Steph Catley in the air and headed it in to equalize. The Courage pulled ahead in the 33rd when Seattle left Crystal Dunn wide open at the top of the box, and made it 3-1 in the 48th when Merritt Mathias took a crack from 20 yards out. Dunn put the nail in the coffin in the 70th minute when Nahomi Kawasumi, who had come in for Alyssa Kleiner five minutes before, was caught out, giving her space for a run up the left. Williams played her a simple lateral pass, and Dunn made good on her chance.

Orlando beat Washington at home in another poor match by a flailing, eighth-place Spirit side.

Orlando scored the game's lone goal in the 11th minute after an unforced error by Joanna Lohman, followed by another unforced error by Aubrey Bledsoe. Lohman, looking for Sullivan, played a lackadaisical sideways pass that Alanna Kennedy pounced on in the center circle. Kennedy looked up, saw Bledsoe off her mark, and sent a long-range effort over her head and into the net. Errors aside, though, any goal scored from behind the halfway line is Sportscenter-worthy stuff, and this was probably the most jaw-dropping goal of the season so far.

Throughout the rest of the half, one pattern played out over and over: the Spirit would turn the ball over in the midfield, often totally unforced, and Orlando would make one or two long passes to get the ball into the box. Washington's offense, meanwhile, on the handful of occasions they managed to find their way out of the midfield, was confined to either making pointless runs directly at Orlando's back line, or charging blindly up the right wing in the vain hope a runner would materialize in the box.

In the second half, the momentum swung in Washington's direction, with the Spirit finally managing to maintain possession through the midfield. Nonetheless, the home side continued to make bad decisions in and around the box and couldn't put much in the way of an attack together. Francisca Ordega found a couple of decent crosses but never had any runners crashing the box with her; Ashley Hatch, who should have been playing that role, looked lost all game. Washington's best chance was probably when Meggie Dougherty Howard dropped the ball back to an onrushing Taylor Smith, who had tons of space to the right of the penalty area, but her long-range shot took a perfectly straight path over the heads of the defense, and then over the crossbar.

In the anticlimax of the season, this game between two of the teams who participated in the recent trade that brought Christen Press back to the states to play for the Royals featured none of the players involved in that trade, thanks to what was described as a "gentlemen's agreement" between the two teams.

Utah gutted out a physical first half, holding Chicago scoreless in what's become expected fashion from this defensively strong side -- they even got a couple quality chances on goal, one by Katrina Gorry that Alyssa Naeher saved at close range.

Things turned around in a second half that may represent something closer to the "real" Red Stars (the team with all its starting defenders and Vanessa DiBernardo running the midfield) than anything we've seen yet this season. The first goal came in the 62nd minute, when Danielle Colaprico hit a long free kick to the center of the 18-yard box, and Katie Naughton beat her mark to send a looping header just past Abby Smith's fingertips. DiBernardo came on in the 66th minute and scored four minutes later. With Sam Kerr on the ball, Utah's defense was laser-focused on her and completely missed DiBernardo floating near the top of the area. Kerr sent her an easy pass and she fired home a right-footed strike to put the game away.