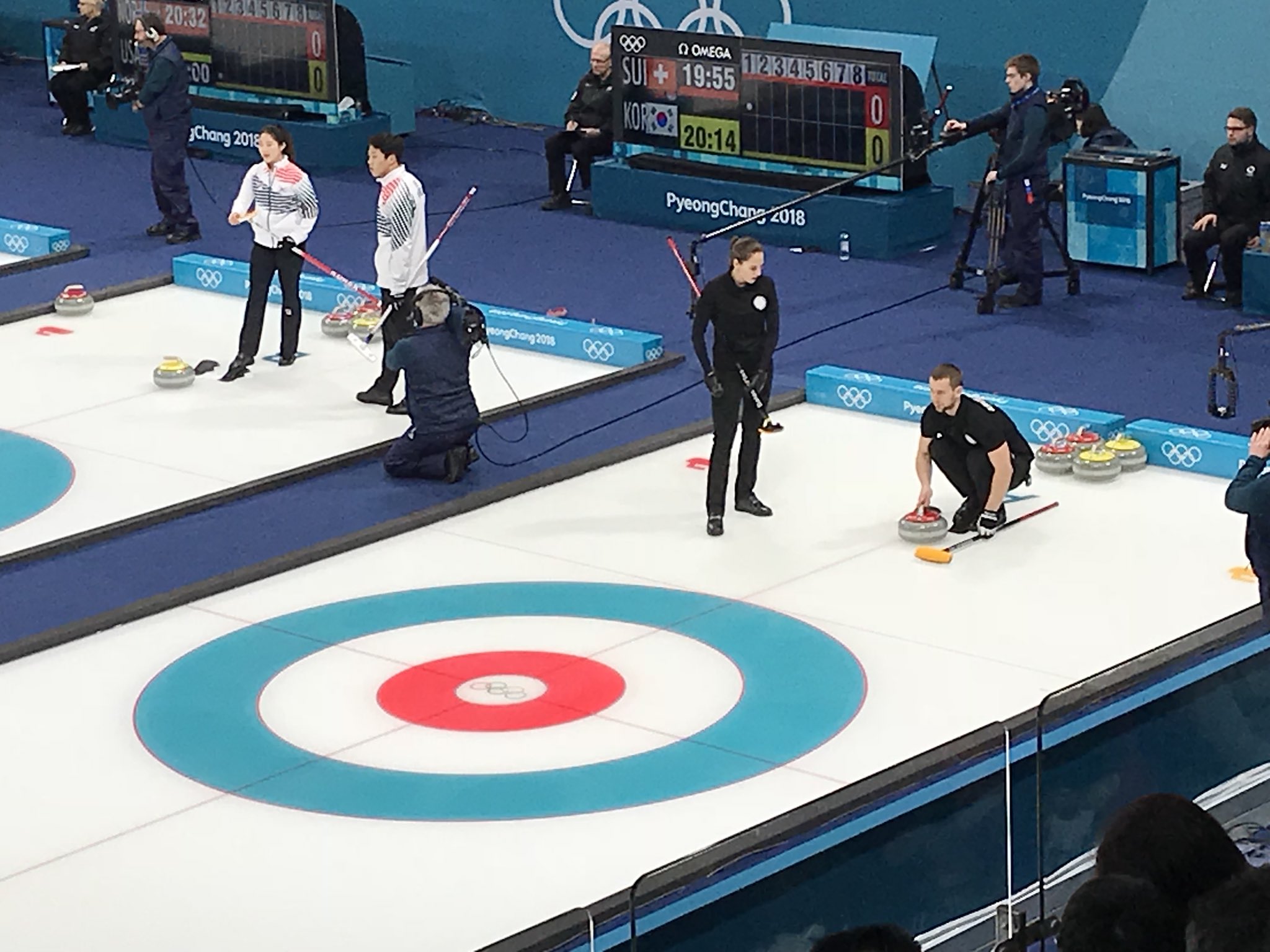 With round robin play completed, the mixed double curling playoff field is set). After losing their first game of the tournament, Canadians John Morris and Kaitlyn Lawes ran the table, finishing as the first seed with a 6-1 record. Switzerland qualified in section position at 5-2, though looked less impressive as the weekend wore on. The Olympic Athletes from Russia took the third position with a record of 4-3, and Norway qualified in the final position with a 4-3 record, after defeating China in a tiebreaker 9-7.

Norway will try and gain some confidence from its tiebreak win, after a difficult finish to the round robin schedule. While the Norwegians wrapped up their slate of draws against three teams that started the tournament 1-3 (China, Finland, and the United States), Magnus Nedregotten and Kristin Skaslien struggled to secure a playoff berth, narrowly beating Finland 7-6 before being blown out by the Americans 10-3. The Norwegian pair started the draw against Team USA brightly, leading 3-1 after two ends. Things turned in the fourth when facing four American stones in a crowded house, Skaslien's draw failed to reach the rings, allowing the Americans to steal four. The Americans would steal in the next end when Skaslien's shot was heavy, granting Team USA a point. In the sixth, the Norwegian was once again facing three with her last rock and missed again, resulting in the Hamilton siblings stealing three points and the game.

As disappointing as Skaslien's shooting was, she faced so much American granite because her partner Nedregotten struggled in his final three games of the round robin. He led all men by curling 84% through the first four games, but curled 68%, 72%, and 64% in the final three, to drop his curling percentage seven points overall. Norway's final round robin game, a 9-3 loss to China, was also Nedregotten's worst. Norway's poor second half meant the team was forced to play a tiebreaker against China to secure a playoff spot –- what had looked like a given after the pair started the tournament 3-1.

The tiebreaker would be a challenge given Norway's individual struggles and Nedregotten and Skaslien's poor play against the Chinese team in their previous game. Norwegian mistakes in shot calling and in execution led to two big ends for the Chinese pair Wang Rui and Ba Dexin. They put up a 3 in the fourth and a 5 in the sixth in the final game of round robin play.

China turned its fortunes around and forced a tie breaker by winning three straight games. The pair beat the Americans 6-4, Finland 10-5, and Norway 9-3. In the process, the duo improved their point differential to +5, good for second in the field. China beat Team USA by stealing in ends five and six, holding the Americans to one point in the seventh end then using hammer to secure two points and the win in 8 ends. In particular, Wang was strong in China's four wins and curled 72% for the round robin, good enough for second among women.

While Wang and Ba entered the tiebreaker with momentum and success against Norway, Norway was ultimately victorious Sunday morning. China won the draw to the button and started by scoring a pair with hammer in end one. But the Norwegians rode two big ends to victory, scoring 3 in the second after a Wang miss and using the power play to record 4 in the sixth. Both Nedregotten and Skaslien put in better performances, curling 88% and 77% respectively. Nedregotten's triple takeout in the eighth secured victory and a place in the playoffs. They'll need to at least match that performance if they wish to have a chance of beating Canada in the semi-final and advancing to Monday's gold medal match.

The Canadian duo is perhaps a little unlucky to finish in first place only to have a semi-final match against the one team to hand them a loss in round robin play. But Lawes and Morris have improved so much since that initial draw against Norway that they have to be favored not only to win their semi-final draw, but the gold medal at this point. They've been that dominant.

Canada finished the round robin strong, defeating Switzerland 7-2, OAR 8-2, and Korea 7-3. It's easy to focus on Canada's potent offense -– Morris and Lawes improved their point differential to +26, 21 points higher than the next highest team. But their defense has also been excellent. The pair have stolen 9 ends through round robin play and have been superb at defending against the power play, typically holding their opponents to a single point and stealing points more than once. Lawes and Morris have been excellent and lead their respective fields; Lawes curled at 76% through round robin play and Morris managed 82%.

The mixed doubles game plays to the pair's strength. Morris' hitting and takeout ability is well-suited to the middle three shots and Lawes' draws, freezes, and ability to bring the big weight when needed is perfect to both set up an end with the first stone and close it out shooting the last. Morris has been impressed with his partner's excellent play, calling her the difference maker for her play in their draw against Switzerland:

"Kaitlyn was really on fire. She made the shot of the game with her inturn freeze in the fifth end (that resulted in a steal of one for Canada). Just a dandy draw; they had us in a bit of heat, and that was a real game-clincher."

Switzerland qualified for the semi-finals in second place but questions were raised about Jenny Perret and Martin Rios' ability to challenge the Canadians for gold. They struggled mightily against the Canadian pair, especially Perret who curled an abysmal 36% against Canada. Unlike Canada, whose point differential increased dramatically over its final three games, Switzerland dropped two points, to +5. My concern for Switzerland going into the playoffs is the pair's inability to record the big end. In traditional four player men's and women's curling, scoring two (or more!) is key when you have hammer. But in high scoring mixed-doubles play, scoring two doesn't go as far. Switzerland has only scored 3 points in an end once, in addition to their perfect, 6-point end against the Americans. They scored only one point in an end 18 times, though some of that can be attributed to the 11 stolen ends they managed through round robin play. Still, the pair's defensive play hasn’t been strong enough to make up for that lack of offense.

Rounding out the playoff field is Olympic Athletes from Russia. At 4-3, the pair of Aleksander Krushelnitckii and Anastasia Bryzgalova are lucky to make the playoffs, luckier still to avoid the matchup against Canada in the semi-finals. If OAR are to beat Switzerland and make the finals, Krushelnitckii must improve on his poor play. He curled 63% in the round robin, tied for worst among all 16 players. That the married pair made it to the playoffs is due to the continued strong play of Bryzgalova. Typically in mixed doubles curling, men take the middle three shots and women the first and last. However, Bryzgalova throws the middle three stones for OAR because she's such a strong hitter. It means that she directly competes against the men in the field and is one of best players in mixed doubles play. Morris had this to say about Bryzgalova before Canada's round robin draw against OAR:

"Bryzgalova is one of the best mixed doubles players I've seen; there's a reason she’s throwing the middle three, because she’s a shooter."

Still, OAR's point differential is a concern; at -8 only the Finnish squad finished with a worse total. OAR has struggled to hold its opponents to a single point, giving up two or more 13 times. With another strong performance from Bryzgalova they could advance to the final, especially if the Swiss pair put in another uneven performance.

Curling fans are familiar with the page playoff system, but won't see that format during the mixed doubles playoff round. Instead, Monday's draws will be two semi-finals. The winner of Canada-Norway and Switzerland-OAR will face each other for the gold. The losers will play for the bronze.