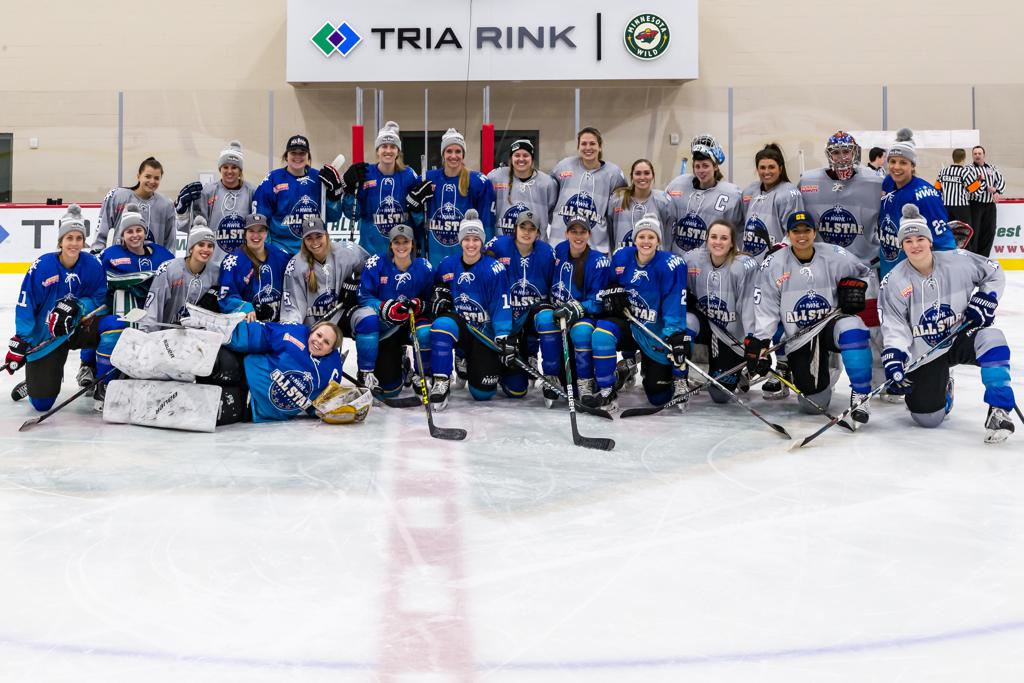 The National Women's Hockey League helds its third All-Star weekend this past weekend in Minnesota, the league's first venture into the western portion of the United States. The NHL's Minnesota Wild partnered with the league, with both the skills competition and game held at TRIA Rink.

Team Leveille, led by Buffalo Beauts netminder Amanda, won the Skills Challenge, while Team Ott, led by Brittany of the Boston Pride, won the All-Star Game itself. Kelsey Koelzer and Hayley Scamurra were named co-MVPs after strong performances on the weekend.

Skills Challenge Brings Out the Best

Players participated in a number of events at the Skills Challenge, including fastest skater, an accuracy shooting challenge, hardest shot, and a breakaway contest.

Highlights include Minnesota Whitecaps player Kate Schipper leading Team Leveille off in the fastest skater challenge. Both Leveille and Fitzgerald swept their rounds of the fastest goalie challenge (always an entertaining sight!) while Team Ott swept the shooting accuracy.

Players really seemed to have fun with the skills challenge, which is always refreshing to see. From Katie Fitzgerald literally sitting on her net, to skater and goalie switching places on the shootout attempts, to the involvement of a young fan -- it was no rules, all fun.

Kelsey Koelzer won the hardest shot challenge, clocking 81 miles per hour on her third attempt. This is the third straight year a defender has won; last year, Blake Bolden won with an 87 miles per hour shot.

In the end, it came down to a tiebreaking rematch of the fastest goalies, with Leveille giving her team the extra edge. Who doesn't love a good goalie race?!

Teams reconvened for the All-Star Game itself on Sunday, in front of a near-full crowd at TRIA Rink. Koelzer had four goals, while Scamurra also put up an impressive offensive showing, and both were named co-MVPs.

The game was an entertaining mix of offensive skill and strong goaltending, with the league's top netminders in goal and some of their best offensive threats facing them. Teams played two 25-minute halves.

Unlike years past, the skills challenge results didn't carry over to the All-Star Game itself, so teams skated in with a clean sheet and no score.

It took a few minutes for the teams to break the goaltenders' seals, but once they did, the goals came flying, one after the other. Team Ott led 3-2 after the first half, with Leveille and Ott facing off in goal. Katie Fitzgerald and Sydney Rossman came in for the second half, and Team Ott won out 8-6 in the end.

Other components of the weekend included NWHL commissioner Dani Rylan and deputy comissioner Hayley Moore attending as guests at the Wild game on Saturday. The league also held an outdoor skate to reach the local community Saturday morning.

Following a seemingly successful weekend in Minnesota, the NWHL now returns back home east. All four teams will be in action on Sunday, February 18. The Connecticut Whale visit the Metropolitan Riveters at 1:30 PM Eastern, while the Buffalo Beauts visit the Boston Pride at 2:30 PM Eastern.