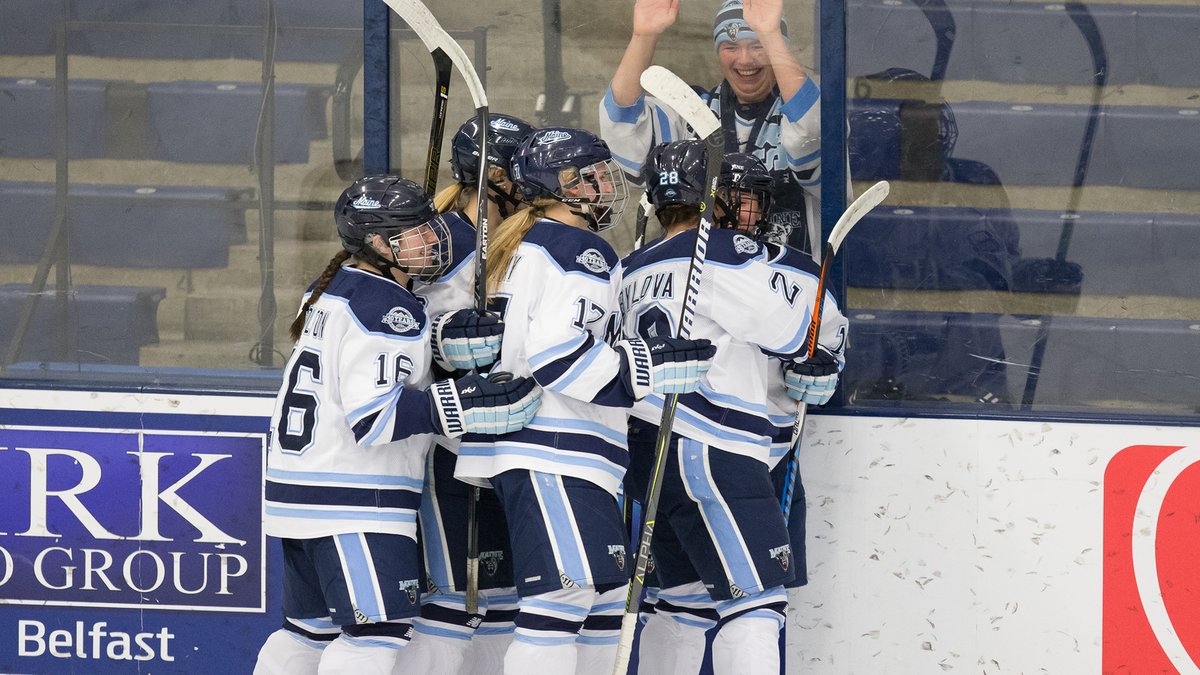 Saturday and Sunday at 2:00 PM Eastern

At the moment, Maine sits a single point ahead of Providence with a game in hand -- they have four more to play, while Providence only has three. But Maine will face Boston College next weekend, and that means that if they're going to hold their spot, this is the weekend to earn points.

These two teams feel about as evenly matched as possible. They tied earlier in the season. They've both been up and down as the season has gone on, getting big wins and then losing to teams we expected them to beat.

Let's just repeat this paragraph from last weekend -- Wisconsin needs a single point to clinch a share of the WCHA regular-season title, while two or more points would give the Badgers the title outright, which would be their third in a row. It would be the first time in program history that the Badgers have won three straight WCHA titles.

It seemed unlikely they'd come out of Columbus without having accomplished that, but here we are.

Minnesota-Duluth has struggled at times this season, but also swept Ohio State at home two weekends ago. They're a dangerous squad, especially if an opponent takes them lightly. Wisconsin will be looking to stop last weekend's skid and hope it doesn't turn into a slide.

In the scheme of things, they're still just a three-loss team and are still atop the RPI and Pairwise, even if they slipped a spot in the polls. But when we're two weeks from the end of the regular season and teams are hoping to be playing their best hockey to build toward the post-season, those two losses loom a bit larger. The regular season is the right time to have those sort of gut-check moments, so it'll be interesting to see how the Badgers respond this weekend.

Every top team has an opponent that always seems to have their number, regardless of their position in the standings or relative talent level. For Clarkson, that team is Quinnipiac. In years past, the two have been fighting for top billing in the ECAC. It's a slightly down year for the Bobcats this season, but that doesn't mean that this will be anything less than a bitterly-fought rivalry game.

Quinnipiac took their meeting earlier this season with an overtime win. In addition to looking to topple the top team, the Bobcats are fighting for position in the postseason tournament. At the moment, Quinnipiac is in fifth place and would travel to Cornell for the opening round of the ECAC Tournament. But they're just two points behind the Big Red and three points behind third-place St. Lawrence.

↑Ohio State -- The Buckeyes took a pair of wins over Wisconsin at home last weekend. The Badgers had lost just one game all season before the weekend sweep. It was the first OSU sweep of Wisconsin dating back to the playoffs in 2010.

↓Wisconsin -- After spending 15 consecutive weeks at number one in the polls, the Badgers dropped down to number two behind Clarkson, the only other team to hold the top spot this year as they opened the season in first place after winning last year's national championship ... over Wisconsin.

↑Hamline senior Sarah Bobrowski -- I'm venturing into DIII territory here for good reason. The senior forward set an NCAA DIII record for most points in a game when she scored six goals and assisted on three others in a 13-5 win at Concordia on Saturday, February 3. The old record of eight points had been done several times. The six goals tied an NCAA record, and her current total of 49 points (16 goals, 33 assists) leads all of DIII.

↓My ability to predict games -- Since I snark everyone else, I'll take this opportunity to take some back. I predicted a boring weekend of hockey and hoped for some upsets to liven things up. Ohio State delivered, as did Harvard in their tie of Cornell, Connecticut in their upset of Providence and St. Cloud State with their shootout win over Minnesota.

↑Ohio State goalie Kassidy Sauve - Her 34 stops in Saturday's win over Wisconsin put her into second place in program history for saves on a season. She will likely set a new OSU program record this week, as she is seven away from passing Chelsea Knapp's 2,421, the current all-time best.