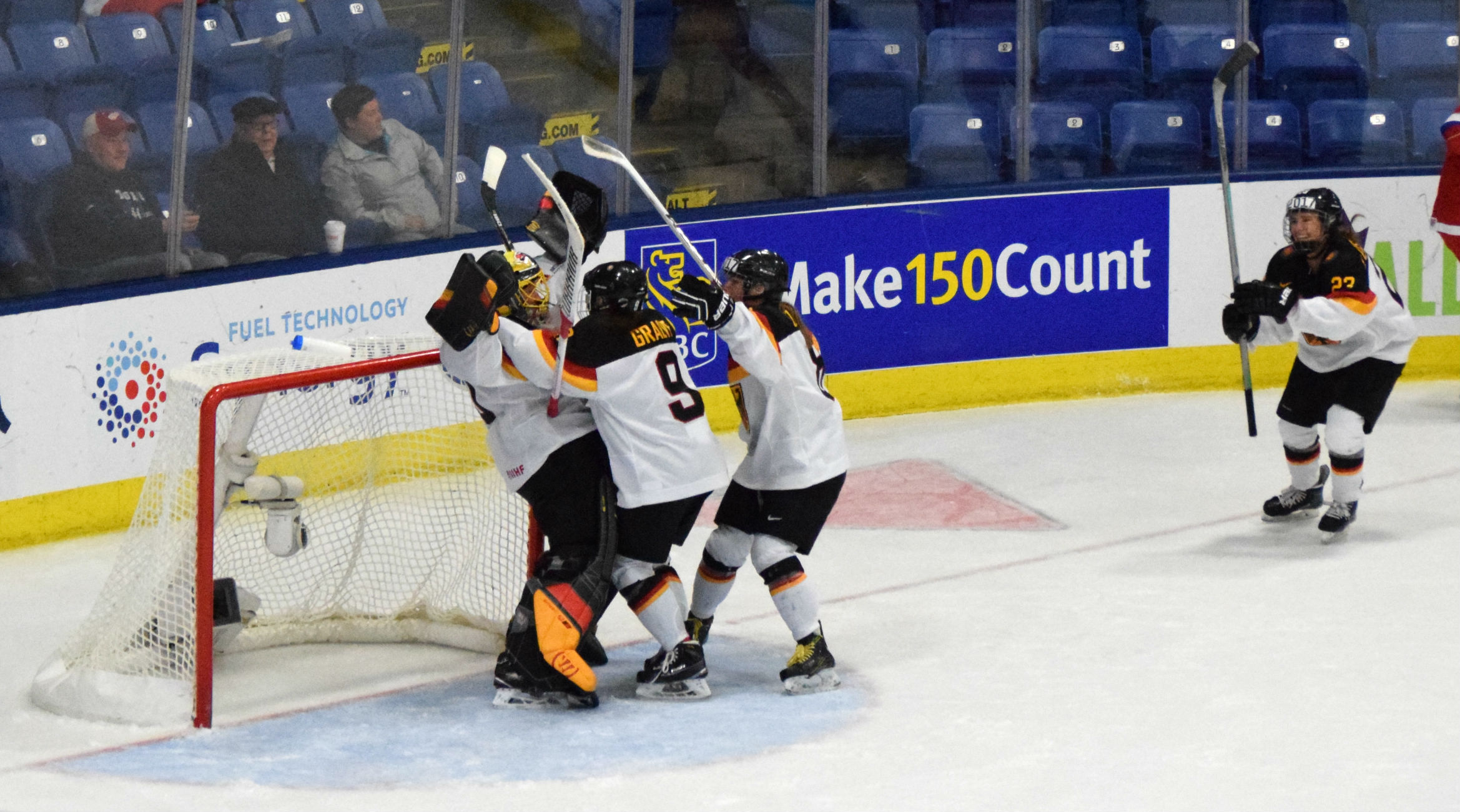 Folks who stayed home or didn't tune in on Tuesday because Team USA and Team Canada weren't playing missed out on quite a day in this tournament. That there's so much to talk about on what many considered a down day speaks volumes about the depth of this field.

The Germans made history on the day that their program celebrated their 500th national team game, with the win over Russia.

Russia scored within the first three minutes of the game, but the Germans were not phased. Before the tournament, I hypothesized that Team Germany was merely going to be trying to avoid relegation, but they actually had other plans.

Goalie Jennifer Harss said she wasn't worried at all when the Russians scored. The German team has proved throughout the tournament that they're capable of scoring.

"I'm confident that my team can score. One goal is nothing. It's one shot. I knew we could get it back," she said.

Harss has been absolutely dominant for the Germans in net. In just under 160 minutes of play, she has a .971 save percentage and an 0.75 goals-against average.

Russia, who won the bronze medal in 2016, will now be playing to place no higher than fifth. They hired a new coach and he added many of his club players to the roster, but maybe they should have just left well enough alone?

It feels like belaboring the point, but Germany's run to the semifinals is so much more interesting when it's put in the context of the fact that just more than a month ago they were in Japan for Olympic qualifications and didn't win. As a result, their achievements so far are that much more extraordinary.

It says so much about the players on this squad that they responded to that disappointment so well. They don't want to dwell on the loss, but they don't want to forget it, either. They came to the US to play for pride -- to prove that they know they belong here and that a single tournament doesn't define them.

They've done it in spades. Germany has never finished higher than fifth at the World Championships. They've never advanced to the semifinal and they've never played for a medal. This year, they'll be doing all three.

Quote of the day, from German goalie Jennifer Harss when asked what she thought when she heard the puck hit the post with just seconds left in the game

It was a bit of a clinic, as they outshot the Swedes 42-16. Susanna Tapani had a goal and two assists in the win and now leads the tournament in scoring with three goals and five assists for eight points.

With just 16 shots reaching the net, Finland goalie Noora Räty said she thanked her team for giving her a bit of a rest.

"My teammates earned a shutout for me," she said.

Though they've made a statement at this tournament, Räty said that this is just a step on the way to bigger things.

"Our big goal is next February and this is just one step. Of course we want to get out of here with a medal, but after this tournament, our focus is going to be on the Olympics and trying to be a big threat there," she said.

The Swedes knew they needed a fast start to put the Finns back on their heels, but weren't able to accomplish that goal.

"In the first 10 minutes, when we were supposed to come out really hard, it didn't go our way. We need to play our best to beat them and we didn't come out as strong today," said Sweden's Pernilla Winberg.

The refrain from everyone on Team Finland is how confident they are and how they aren't surprised to be in this position. They've put in the work and revamped their program, and that work is paying off.

The Finland roster is a mix of veteran and young talent. At 27, Räty couldn't be considered old, but she has been playing on the team for more than 10 years. In women's hockey, that is still on the older end for the majority of teams. As a veteran, she's helping lead the locker room and guide the younger players...though she said she hasn't had to do much.

"Just be confident. They're all really good players and they have this young confidence –- a kind of cockiness. I like that aspect in them. Sometimes thinks it's not a good thing, but I think it's a little good to be cocky. It means you're confident. I hope they stay like they are. Obviously they're going to get better throughout the year," she said.

Second best quote of the day, from Finland's Susanna Tapani

"We've been in the bronze medal game so many times –- it's not enough anymore."

This was pretty much exactly where Sweden has placed in recent tournaments, meaning that they met expectations. But it's hard to be happy with that when there's the potential for so much more. Coach Leif Boork said he was too close to the end of the game to be able to have any insight on what the team needs to work on, but that he was very happy with how his team has handled the mental side of the tournament.

"We mentally did very well. We put ourselves in a bad situation in the group by losing against Germany and then we mentally, I think, handled those next two games very well," he said. "I would have liked to have an off day today so we could have taken a new start. The games are very close [together] and I didn't think we had the energy on the team today after those two difficult mental games we had against Switzerland and Czech."

"I'm happy with the team. They handled this situation as a team. We have some new captains and leaders on the team who really took care of the younger plays the older players helped them [transition]. I'm very pleased with the mental side of it and the group condition," Boork said.

Third best quote of the day, from German goaltender Harss, when asked if the goalies had done anything different to be so successful this tournament

"There's no secret recipe. We're just always working hard, and finally this time it's paying off."

These two are playing a best-of-three relegation series that may ultimately be meaningless if the IIHF votes to expand the field for this tournament to 10 teams.

In the meantime, Czech Republic solved their offensive woes, scoring more than a single goal for the first time all tournament.

Switzerland should have had all the momentum in the first period, as the Czechs took penalties and the Swiss even had a 5-on-3. The Czech penalty kill was outstanding and the Swiss didn't seem to know what to do when teeing up a slapshot for Lara Stalder wasn't successful.

Multiple Czech players are likely sore today from putting themselves in front of Stalder's shots, but their blocks were crucial to keep the game within reach.

"We know that she had a really good shot and they were trying to get the puck to her. But we knew it and we defended for it and we blocked so many shots and that was really important. It's mental for us. We have to prepare and stay focused," said Kateřina Mrázová. "They missed the net with some shots [on the PP]. When they didn't score, they were down and we were up and then we scored. So it was helpful for us."

The Swiss mounted a comeback attempt in the third period, but it was too little, too late.

The Czechs take the series lead -- and a lot of confidence -- into the second game of the series on Thursday at noon ET.