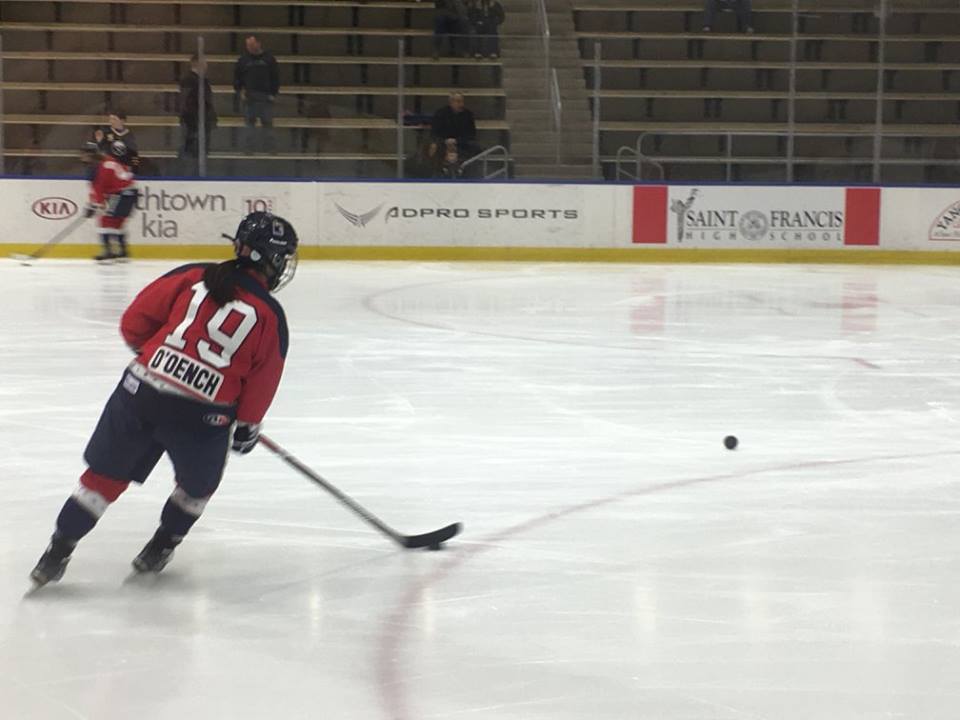 To some, a four-goal deficit may seem insurmountable. For the NWHL's New York Riveters on Sunday, however, it was a challenge that was met with energy, focus, and determination that helped them to a 6-5 overtime victory over the Connecticut Whale.

The Whale started off strong, scoring three times in the opening minutes of the game to take a quick lead. Zoe Hickel opened the scoring, notching her first goal with Connecticut in her first game with the team.

Kelly Babstock and Kelli Stack added goals just 36 seconds apart to give the Whale a 3-0 lead. Connecticut added another goal less than halfway through the opening frame, as Hickel potted her second of the night to put her team up 4-0.

The Riveters knew that they had to rally back. Just 27 seconds after Madison Packer was called for holding, Janine Weber got her team on the board with a shorthanded tally with 5:08 to play in the opening period.

Less than seven minutes into the second period, the Whale regained their four-goal lead, as Stack scored her second of the night.

The Riveters found the space and energy to rally back once more, and for real this time. Madison Packer made it a 5-2 game with under seven minutes to play in the second, thanks to a power-play tally after a tripping minor to Connecticut's Cydney Roesler.

Weber opened the scoring in the third period with her second goal of the night. About nine minutes later, Michelle Picard made it a one-goal game, and Miye D'Oench later took advantage of the power play (with Meghan Huertas in the box for a slash) to tie the game at five.

With just eight seconds left in regulation, Hickel was called for roughing, which gave New York a prime chance on the power play heading into the extra frame. Just 1:19 into the overtime period, Courtney Burke scored on the power play to give the Riveters the victory.

Katie Fitzgerald carried the brunt of the goaltending duties for the Riveters, although she was pulled and later went back into the action. In total, she had 17 saves in 53:47. Sarah Bryant allowed one goal on two shots in 7:23. On the Connecticut side, Nicole Stock stopped 28 of the 34 shots that she faced.

With the victory, the Riveters are now on a three-game winning streak.

The Boston Pride continue to remain undefeated this season after defeating the Buffalo Beauts by a score of 3-1 on Saturday.

The Pride took a 1-0 lead less than five minutes into the game on Lexi Bender's second goal of the season. Buffalo tied it up later in the opening period on an even-strength tally by Emily Janiga.

For a while, it seemed like the Beauts were keeping up well with Boston -- at least until Meghan Duggan, the former Beaut, made it 2-1 late in the second period. Hilary Knight added a goal in the third period to seal the victory for the Pride.

Despite taking the loss, Amanda Leveille had 40 saves in net for Buffalo. Saturday's game marked the third straight that Leveille has faced over 40 shots. Lauren Slebodnick stopped 23 shots for Boston in her first game since January 21.

Playoff positions will be determined by points-percentage, with the Isobel Cup Playoffs happening via single-game eliminations on March 17 and 18. The winners of those games will then compete for the championship on March 19. The locations for those games have not been announced.

The NWHL will return to action with a pair of games this weekend. Connecticut hosts Boston on Friday night (7 PM Eastern); the Whale will then travel to Buffalo for a 3:30 PM (Eastern) matchup on Sunday.