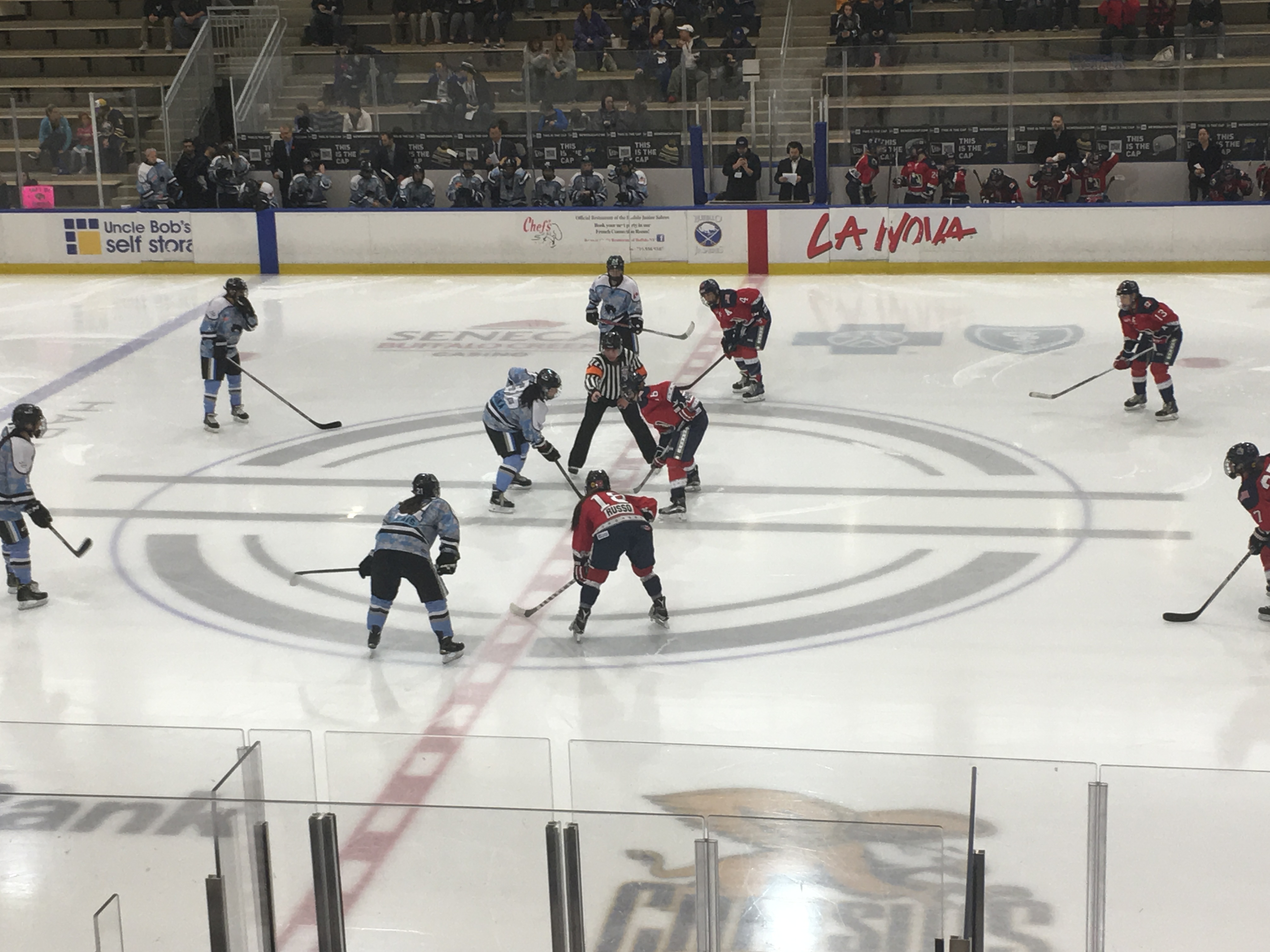 When the Buffalo Beauts and the New York Riveters got together for a pair of consecutive games this past weekend, special teams were the name of the game.

Between the two games, twelve goals were scored — seven of which came on special teams.

The Beauts notched four power-play goals while going mainly with a unit of three defenders and two forwards.

"I think our power play is one of the tops in the league, and it works very well," said co-head coach Ric Seiling. "I just wish our penalty kill would've worked as well."

The Riveters tallied twice on the advantage, and once shorthanded on the weekend. In addition to those goals, there were plenty of other chances on both sides, along with several missed calls either way.

In the end, each team walked away with one win. The Riveters came out with two points on Saturday in a 3-2 win, while the Beauts snatched a 4-3 overtime victory on Sunday to close out the weekend strong.

Brianne McLaughlin and Amanda Leveille split goaltending duties this weekend for the Beauts, while Katie Fitzgerald earned both starts with strong performances throughout the course of the weekend.

McLaughlin notched 16 saves on 19 shots faced in Saturday’s loss, while Leveille saved 21 of 24 shots on Sunday. Fitzgerald stood tall for the Riveters, stopping 60 of 66 shots faced in the weekend.

New York came out strong early in the first period, with Rebecca Russo potting her first goal of the season to put the Riveters up 1-0 less than five minutes in. Buffalo didn’t stay down for long, however. With Michelle Picard in the box, Buffalo tied the game at one with Corinne Buie’s second goal of the season. Just minutes later, Emily Janiga tapped in her third of the season to give the Beauts their first lead of the night.

A fast-paced, exciting first period turned sour in the second frame - one that Beauts co-head coach Seiling called "the worst period" he's seen the Beauts play between this season and last. Both teams appeared to struggle, with no solid zone time at either end. Buie had a good chance at one point, but shot it high over the net. In the end, the teams skated off after forty minutes with the Beauts still holding onto a 2-1 lead, outshooting New York by a 17-8 margin.

The third period was littered with penalties. First one to New York, then Buffalo; and again, and again. With a 4-on-3 opportunity, the Riveters tied the game on Madison Packer’s goal. Kaleigh Fratkin and Kiira Dosdall notched assists.

Buffalo had several good, close chances to get a go-ahead goal, but Fitzgerald stood on her head with save after save to keep New York in the game.

With just 1:33 to play, everything changed. Miye D’Oench potted one to give the Riveters a 3-2 lead, leaving the Beauts very little time to pose a comeback, and New York pulled off the victory.

"Your special teams have to be on top of their game to win at any level, so that power play goal late in the third was huge to tie the game," said Riveters head coach Chad Wiseman.

With that, New York captured their first win of the season -- and it was a big one that spoke for how the team has begun to come together.

"Obviously losing the first three is a tough way to start the year, so hopefully we can build up some of their confidence," said Wiseman after Saturday's win.

Beauts forward Shiann Darkangelo noted that the team needed to find a way to play a full game, particularly a full 20 minutes at the end.

"We've got to capitalize on our chances," she said. "Personally, I had a breakaway, I could've put that one in. We had some chances to take shots we maybe passed up, trying to find the pretty, back-door play... we've got to find a way to put those in."

Part of the challenge heading into Saturday's game? Returning from a two-week break.

"It was definitely tough," Darkangelo said. "It was kind of like the first game of the season, almost, after having so long of a break. I was surprised how well we started in the first period; I thought we came out hard and we've just got to continue to work together, communicate and get our group going."

"The good thing about back to back games, especially the team you just played, is to have a chance to redeem yourself," said Beauts co-head coach Craig Muni.

That's exactly what the Beauts did, capitalizing on their chances en route to an overtime victory.

Sunday’s game opened with a first period that saw momentum shift several times. The Beauts notched the game’s opening few shots, but the Riveters eventually found their legs and put a few dangerous chances on the net.

After several good saves from Leveille, the Riveters took a 1-0 lead on a shorthanded tally by Janine Weber. With Leveille down, Weber took advantage of a wide-open net to pot her first goal of the season.

New York increased their lead to two early in the second period, with Milica McMillen adding a power-play goal just 43 seconds in. They quickly nearly added a third goal; the puck hit the post and slid across the crease, but Leveille managed to get behind it just in time to keep it out.

A weekend already filled with penalties - including some seemingly weak calls and a few questionable non-calls - kept going with Madison Packer heading to the box for a hook. With the advantage, the Beauts got on the board, as Buie scored her third of the season and first of the game. Kelley Steadman, who missed Saturday’s game, notched an assist along with Kourtney Kunichika.

A short time later, the Riveters appeared to go ahead, but the goal was called off immediately by the referees, who said that the puck was kicked in. Just as the momentum nearly shifted one way, it went the other way. Riveters captain Ashley Johnston headed to the penalty box, and Buffalo capitalized quickly. Megan Bozek potted her second of the season to tie the game at two.

With under five to play in the second period, New York’s Kiira Dosdall went down in front of the Buffalo bench. She collided with Beauts forward Steadman, who appeared to shove her to the ground. Dosdall remained down for some time and was eventually helped off the ice by her teammates and a trainer; she did not return to the game. Steadman received a two-minute penalty for body-checking.

The Beauts came out strong early in the third period, killing off a bench minor and then once again capitalizing on the power play. Buie scored her second of the game to put Buffalo up 3-2, assisted by Bozek and Kunichika.

With less than four minutes to go, Buffalo carried a 3-2 lead — one they were unable to hold for very long. New York had a chance to tie the game; Leveille gave up a rebound, and Packer tucked it in on a backhand with 2:12 to play in regulation.

Despite giving up the tying goal late in regulation, Buffalo looked solid coming into the overtime period. They put up several good chances early on in the extra frame, but Fitzgerald stood tall in net. Eventually, a Beauts shot got through, trickling just enough over the goal line for Buffalo to capture the extra point and win 4-3. Shiann Darkangelo notched her second goal of the season on the overtime game-winner.

"As a goaltender, anytime you get scored on, you just take it at the next shift to do the best you can," Leveille said.

"It’s unfortunate that they scored late, but I think the way we answered back and scored in overtime was exactly what you want to do," she said.

The victory marked Leveille’s first win of the season, and also the first game she played all sixty minutes (plus overtime, in this case) for. She’d been pulled in her other starts, so the win was an especially big one.

"The team played fantastic in front of me & when they play like that, that gives me confidence," she said.

The Beauts were without defender Jordyn Burns both games this weekend; she was listed as a scratch - not a healthy scratch - twice. Kristina Lavoie missed Saturday’s game but returned to the lineup Sunday. The various roster shifts allowed several practice players to slot in, including Ashley Vesci, Morgan Beikirch, Jacquie Greco and Kayla Parsons.

On the New York side, Sarah Bryant, Cheeky Herr, and Gabie Figueroa were healthy scratches for both games. Amanda Kessel and Courtney Burke were also both out of the lineup.

“We’re really hoping for next weekend against Connecticut,” he said. “But at that point, if she’s not 100 percent, we’re still not going to force it when we have another week off.”

Wiseman also said that Courtney Burke is likely 4-5 weeks away from returning to game action.

NWHL action continues on Sunday, November 20 with the Beauts hosting the Boston Pride, while the Whale visit the Riveters.